I'm moving house in the near future, and as I work from home I am trying to organise the transfer of telephony and Internet services ahead of my moving date.  Ideally I would like to have a near continuous Internet service, but according to BT and most of the Internet Service Providers I have tried, this is almost impossible!

Why does moving home and taking your broadband service with you have to be such a complete nightmare?  It's not as if I care that my telephone number will change and I'm prepared to give loads of notice that I am moving so what's the problem?  I spoke to yet another BT guy today to try and clarify the situation.  By the way, I've spent quite literally hours on the phone to them and Demon Internet, my current ISP, to try and sort this mess out.

Anyway, the BT customer services guy today told me that my "new number" was effectively a reserved slot, so that it was quite possible that the service providers would get a negative result when they queried the line to see if it was ADSL enabled. 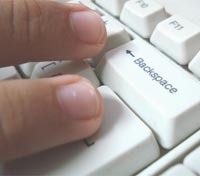 Okay, that's fine I thought.  So we'll try the current house owners' phone number; they've been good enough to pass that on to us, so we'll try that and see if the property can have an ADSL service. BT guy thought that this was a good idea too.  Alas no, it's not that straight forward, because the previous owner has now cancelled their telephone service and as it turns out, its the same number as our new one anyway.  I've got to wait until I physically move there before I can get my broadband sorted out.

I just wish they would all communicate...

This is all just so frustrating.  I had originally thought, I'll tell BT what day I'm moving and the tell my ISP that when I'm moving and that will be that.  To be fair to BT though moving the phone service is fine.  It's just that the ISP can't do anything until they've got the line is in my name and active, after that it's a five to ten day wait.  Presumably this is because they need someone at BT to do something.

I just wish they would all communicate and work together, life would be so much simpler for the rest of us if they did.  I just want a continuous broadband service (or something close to it) when I move house.  Is that too much to ask?

Adam, you should have been told that it can take up to 10 days for your broadband to find its best profile, until then the speed will fluctuate. You may have a slower speed because you have moved to a house further from the exchange. There are many reasons for slow speeds and there are lots of websites where you can find information on these reasons.
By the way, a little punctuation goes a long way !
01/03/11 R swipe
-14

I dont like bt becuase there speed capping issues but when I came to move I phoned them and said I was moving on such a date (a week before moving) and they said thats fine as stopped my internet on the old property at about 5pm and it was on the new property by 7pm on same day with the same number kept. I was however moving to another house in the same town so it was the same exchange so maybe thats why it was so easy. however for the past few days my conection limit is 2meg and even says 2meg on the speedtester site so they need to update my profile to 8meg
01/03/11 adam
-19

BT are useless - Lady told me that 'computer says no' can't process the order to move home as you sold the house and the new owners rang BT before I did????
Apparently being in a house chain is something new to BT and it cannot cope with getting its head around people moving in and out around the same time??
Has anyone else moved house before or is it just me and our buyer??
18/01/11 bt ARETHE pits MAN..THE PITS
-8

Couldn't agree more
I am now experiencing the same problem
Like you I have given plenty of notice to BT and AOL but no joy
After a conversation with AOL today I have to wait for the new line to be activated inmy name and they treat it as a new request and it will take up to 10 days for broadband to be activated
What a shambles and they have the cheek to lambast the public sector!
I did just wonder if it was there way of getting round the useless MAC problems and delays as they did confirm that they don't need a MAC for the transfer.
Maybe its quicker to make it a new connection rather than a transfer
What tripe
11/01/11 Beady
-19

I have the same problem. ISP= Zen ('Which?' Best Buy), Phone =Tesco. Zen said to get "simultaneous provide code" from BT, who said get it from Tesco, who said haven't heard of them, then eventually gave me one. Zen said invalid code, then Tesco said not invalid as their Network provider 'cable & wireless' has verified it. Zen said if Tesco's network provider is C&W they cannot provide us with a broadband service at all! I am moving in 3 days, and notified them all 2 weeks ago. Seems I can do no more & will have no internet which I need.
09/09/10 Larna
-18

I read this after several hours speaking to BT and Talk Talk. Exactly the same experience. BT advisors very pleasant but no answer. What was very frustrating was that when I organised the BT tel no. change I was advised no problem if you go with BT broadband that can be done on the same day. Not correct - confirmatory (no reply email) stated it would be 06/09 ( moving in on 27/08) At the end no joy despite the house we are moving to having both BT line and BT broadband. It was impossible to get a technical answer to explain why so long!!!!?????
16/08/10 peter stephenson
-4

I moved house last month. The previous owner had a line with Talk Talk - who have refused to cancel his old phone line. Talk Talk won't talk to me because I'm 'not their customer'. Can't move my business number or internet to my new house. It's been 4 weeks now and still ongoing, and lots of lost business. The previous owner has now blocked all incoming calls on 'his' line to my house.
23/04/10 wit's end
4

There is a company that does all that for you.
You just phone the 'Home Movers' team and they do it ALL for you when you move house!
Simple really if your with the right company.
If you want to know anymore email me at: david @bestbillsaver.co.uk
05/04/10 billsaver
-4

I had the same issue recently with BT broadband - it is 23 days since I cancelled at my old house and asked them to move it to my new house.

BT could only give me an appointment 15 days after I cancelled - and a few seconds after the engineer came, my telephone lines kicked in. But no Broadband - has been a week now, and still cant see when or how.

I use a lot of Broadband at home for work, so I am now down to sipping on coffee in one of the many coffee shops which provide free broadband... or McDonalds.
22/03/10 Brat
-3

@*kfjahdkj
I am afraid that even having the phone & BB with same company does not help.
I have both supplied with PlusNet and I am moving in 3 weeks. I have just found that because the house I moving to has a phone that is in use" then they cannot do a simultaneous move but will take 24 hrs for the phone and a min of 5 working days for BB

Imagine if this happened with Electricity of Water !!

If it was a start order the connection charge would not be raised anyway. BT even say the charge is only if an engineer is required to switch the line on which would be a provide.
21/09/09 bfght
-16

if anyone payed BT the connection fee of 122.50 and did not have an engineer visit call them and ask if the line was a "start or provide order" if its a start order then you are entitled to a full refund ifs its a provide then hard luck you gotta pay
21/09/09 h33t
-11

edit I apologise for the swearing :D and BT screwed us over because it took over 3 weeks to change the line which if they wanted to could be done in a few hours
18/08/09 Kenneth
-6

BT are f****** ridiculous aswell as Orange, if anyone is looking to change ISPs a highly suggest you do not take Orange. I am 16 an although I do not own the house or the broadband I probably take up most of the usage (although its not hard because alls my dad does is check emails) I depend on internet for entertainment as in online games mostly at times when there is nothing on the tv or friends are busy or whatever. In my old house the internet was quite good majority of the time (ofcourse nowhere near the 8 meg that Orange advertise) disconnects and sometimes speeds inferior to dial up were a problem though, none the less I dealed with it. Now I have moved house and it has took over a month to finally get internet, I say internet but this can barely be classed as it because as Orange said "You will have up to 6 meg internet at midnight" brilliant I thought and it was running at 5 o clock that day little did I know the speeds were 0.09 kbs which is not 6 meg and alerting Orange was no help as they say it is a 14 day stablising period (cough bull cough) and to keep checking the speed on speedtest.net which helps the internet in no way and this is what I am dealing with now over a month and Orange still cant provide me with basic broadband absoultely ridiculous. In short dont get Orange broadband you will regret it, as it is one of the worst (if not the worst) provider of internet.
Rant Over
18/08/09 Kenneth
-5

Problems with BT phone and broadband

Moving Sky to my new home was a nightmare

Not getting broadband speed that BT promised?