Having had another bad week on the M25 I decided I had to get this off my chest.  I use the M25 anti-clockwise to return home from the M4 interchange, but the worst stretches in my opinion are the M3 interchange and the A3 interchange.

Queues at these sections are exacerbated by the mindless morons who nip down the long exit approach roads and then nip back into the inside lane on the M25.  You also have the last minute lane changers going from the middle lane to the exit slip road.  All this poor driving does is increase the queues as drivers jockey for position.  To top it all you also have to avoid the foreign lorry drivers who are doing the same thing but they do not bother to look before they move.  They just pull out and go where they want to with no thought for anyone else on the motorway. 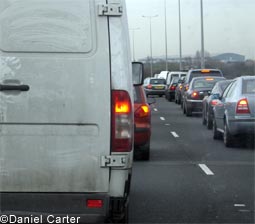 Rubberneckers who slow to a crawl, gawking...

A typical journey will also be slowed down by the rubberneckers who slow to a crawl, gawking at what has happened to some unfortunate driver on their side, or on the other side of the motorway.  Why can't they get it into their heads that their journey would be so much quicker and safer if they drove with consideration for the road conditions and avoided the temptation to be nosey rubbernecker?

Finally, what about all those impatient drivers who nip off at an exit because there is a queue in front of them.  They then cause a bottleneck on the other side of the interchange as they battle to rejoin the motorway.  Is it just me or does this sound like crazy behaviour?  I don't know what the solution is to all this but I feel better now!

An accident can NEVER be "no ones" fault. ANY accident is preventable, those who think otherwise are heading for one themselves!!
15/01/14 bravo
-1

With regard to accidents, Here's a thought.., Accidents DON'T JUST HAPPEN!.., Accidents are CAUSED......, by someone's NEGLECT. I've been driving for over 34 years.., 28 of them behind the wheel of an articulated lorry, and fortunate to be accident free too. That is because i can read. Believe me., I have seen some pile ups in my time. Usually caused by some ar**hole (and YES.., that includes Women), who simply don't know how to read a road sign, or even look at the big white 'idiots guides' painted on just about every road around the globe. Or doing something like reaching to get something from the glovebox, or changing a cd. How hard can it be to move over to the lane that ISN'T closed off when you see the first warning sign?? (Didn't see it??...., Then you obviously weren't 'looking', were you)?.., That way, all traffic would simply be able to 'keep moving' through, rather than get all snarled up in a bottleneck generally caused by ignorant twats who like to race up the closed lane, only to come face to face with road cones, and then cause havoc trying to get into the lane they should have been in in the first place!. Hardly rocket science, is it? Stay OFF the phone too, cos if any of you ever hit my truck.., it won't be me that gets hurt. I'll have 44 tonnes under my backside. It's far better to be 10 minutes late in this world, than to be 30 years early in the next! Read the road guys n gals.., Stop the rubbernecking too.., Because 98% of the time.., it's usually a broken tail light caused by someone behind them not looking, or reading the road. (How's that for irony)?? Don't be a statistic. Oh, and one more thing.., just '1 flash' of the indicator when 'halfway through changing lane' doesn't really constitute a turn signal, does it? I've had years of experience on the roads, so i can predict a lot of the time.., but it doesn't make me, or anybody else, a MIND READER! A bit of time, patience, and courtesy will keep you alive longer. Drive safely guys n gals. :)
09/07/11 Laz
-2

Rubbernecking although perceived as disgusting and perverted is a condition built into the Human framework, something to do with the pack instinct and looking at the kill, drawn from our hunter gatherer past. Although we dont wish to rubberneck we are all drawn to it. I'll wager even the most militant anti-rubbernecker will cast a glance and even slow down ever so slightly to see the bloodbath on the road, so Human=pack instinct=view the kill..
05/05/10 Rider of the Apocalypse
1

By no means is it a good or practical solution and yes I'm pretty much talking out my @rse, but I'd love every gawping driver to be pulled over and issued 3 points and £100 fine.

I only say this because 1 accident I've been in was the result of what I later saw to be a van on car crash, the moronic mindless 27 year old woman caked in make up behind me was on her phone and staring at the accident. I saw this from glancing into my rear view mirror but had nowhere to go as the traffic had stopped. Crunch. When I got out, she stayed put and the police came over. She claimed I reversed into her car. Retard. As far as I know, the police saw it and she was heavily fined, given points and her insurance company didn't try to contest police statements.
04/04/10 Chris.
8

Car Crusher, here is a radical thought for you stop all drivers driving two cars or more at once.
So you are saying "what the h*ll does he mean by that" no doubt ... well how many drivers do you know that can drivemore than one car at a time??
If building more roads generates more cars, where do all the drivers come from to drive those extra cars??
If we increase the capacity of the motorways to accommodate the number of drivers who actually use a particular stretch of road, then where will all the other cars come from to fill it up??? End of problem, and no need to crush more cars.
Just crushing cars, and the car "Scrappage" scheme as it is called, generate more polution producing new cars than running older ones longer. Regardless of how "clean" newer engines are.
We should all be driving Hydrogen powered vehicles, and pollution would from cars would be almost non-existant.
13/01/10 Vintage driver
-8

I have one idea to tackle motorway congestion, be it on the M25 or anywhere else. If we encourage employers to almost exclusively employ people from within a 10 mile radius of their place of work; there would be fewer cars on the road and less congestion.
02/08/09 Terry
3

Stuck in traffic on the M60 just before the M61 slip near Eccles Manchester I heard a siren behind and prepared to move over. Checked my mirrors but no blue lights. I did a double take when I saw a white unmarked transit connect van edging everyone from the outside lane. It then shot to the hard shoulder and disappeared up the motorway still sounding a siren!! Was this an unmarked police car or just a very bold commuter...can anybody please explain!?
08/04/09 Bryster
6

I believe the practice is known as 'swooping' - the daredevil, death-defying display of stupendous car control and test of steely nerves which leaves us lesser driving mortals shaking our heads in admiration.

These 'Last Chance Saloon' lanes that are being incorporated into major junction exits only encourage people shooting over from the outside lane to the slip road. The kind of slip road exits where there are two filters, merging into two lanes on the actual slip road. The number of people I've seen come flying across three lanes of traffic and the chevrons to make their exit is staggering.

Although on the M42 the other week, I witnessed a BMW cut across the chevrons to make the exit, and seconds later a police car that had been cruising behind a lorry put on its lights and shot off after the BMW, leaving all the surrounding drivers with a warm happy feeling in their tummys!
19/03/09 Alex R
-1

Peter is actually from Kent, and you go where the work is. I dont mind paying a toll so long as it is fair.
Incorporate road tax into the fuel. Reduce Government fuel Tax at the same time.
Of course I didnt think they built Motorways to attract cars.Easing congestion in the countries By-Ways, how silly of me.
BTW I am also for Hydrogen Cars, Nuclear Plants for electric, as well.
I do apologise "Crush All Cars" rename yourself TROLL.
28/05/08 Peter
0

Peter is actually from Kent, and you go where the work is. I dont mind paying a toll so long as it is fair.
Incorporate road tax into the fuel. Reduce Government fuel Tax at the same time.
Of course I didnt think they built Motorways to attract cars.Easing congestion in the countries By-Ways, how silly of me.
BTW I am also for Hydrogen Cars, Nuclear Plants for electric, as well.
I do apologise "Crush All Cars" rename yourself TROLL.
28/05/08 Peter
14

The cause of the congestion is simple. Too many cars. Guys like Peter need to pay more for the motorways, by toll if necessary. Or have their cars crushed.

All building motorways does is attract cars like a swarm of flies. Why do people live in Andover and work in London? It's complete nonsense.