Hundreds of thousands of pounds have been spent on motorway information boards and a similar amount is being spent on the Traffic Officers and their new Land Rovers.  All this has achieved is the exact opposite to that which they planned and the reason for all the extra funding.

Any information we receive on the road depends on the person in the control room.  To make a route change we need information a junction or two before the incident and we need to know what has happened.  A breakdown is cleared much quicker than a multi-vehicle accident.  Instead of reasonable detail and advance warning, all you normally get is "Queue Ahead" and with some control room staff you get nothing at all, or maybe just a generic message like "Think don't Drink and Drive".  There are odd exceptions to this scenario, but the exceptions are not that frequent. 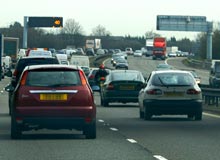 Mobile Highways Staff, what is it with these people and lane closing?  Incident on the hard shoulder close lane 1, incident on lane 1 close lane 2 as well, incident on lane 2 close the motorway.  The traffic has already slowed down with the rubberneckers copping a look.  There is a small minority that are professional (obviously ex-police), who deal with incidents professionally with a regard for the road user.

To cite an example.  On the M25 anti-clockwise (junction six), there was an accident on the exit slipway in lane 3 with Traffic Officers in attendance.  The car was coned off and vehicles were moving past in lane 1 and 2.  It was slow but everyone was at least moving. Another couple of traffic units turned up and parked on the slip road blocking that part that had been moving and the whole thing just ground to a halt.  To top it all they stood at the side of the road chatting and drinking tea from their thermos!

The Highways Agency has to be more professional and deliver a service to the road user.

I'm sure youv'e seen the two black rubber strips placed across roads. Not only are these used for monitoring traffic flow and density, they can now be used to judge speed on the recorders. This enables the police and partners to set up speed traps on said roads. It's wonderful what modern tec does these days to bolster the governments coffers and police funds.
29/11/18 Hush Puppy
6

Mmm, think you need to check your fact. the queu caution signs are set automatically by MIDAS loops in the road caused by traffic ahead moving less than 40 mph over them, not set by the control room!!! The Don't Drink Drive are set by the National Traffic Control Centre, owned by a provate company under contract to Highways Agency....Maybe if you spent less time moaning and more time concentrating on driving you might get somewhere in this world other than...Milton Keynes....
19/10/09 The Hunter
-1

Well, Bryster...I`d say a bold commuter!! The blue light regulations say that ALL emergency vehicles fitted with a siren MUST show easily visible blue lighting. Anyone can use the net to buy all the siren/lighting one could ever need to make your vehicle appear to be a genuine emergency vehicle...........
07/05/09 Praetorian_UK
-7

Stuck in traffic on the M60 just before the M61 slip near Eccles Manchester I heard a siren behind and prepared to move over. Checked my mirrors but no blue lights. I did a double take when I saw a white unmarked transit connect van edging everyone from the outside lane. It then shot to the hard shoulder and disappeared up the motorway still sounding a siren!! Was this an unmarked police car or just a very bold commuter...can anybody please explain!?
08/04/09 Bryster
-6

Whether someone from the Highways Agency has read this I do not know. For the past week The M25 Boards have been like Pathe News. Advising in advance of an accidentproblems on other roads.
This is what the boards are for Information.

Lane Hogger has gone quiet or has he started the Information explosion?
07/02/08 Peter
-1

Well I think the information boards ought to be updated more often with better traffic information. Some of the messages they display are plain stupid and a waste of time. How about telling us about the accident and where it is???
05/02/08 Jon
6

Well lane hogger how did you pass the entrance exam with the poor grammar and spelling as you constructed your reply.
You missed the whole point of the gripe and assumed I was a bad driver. I was pointing out the inadequacies of some of the Traffic Officers, and also qualified the statement that there are some professionals. You chose to ignore that and start flaming. Driving and speed are not dangerous, but inappropriate speed and poor driving skills are.
So what are the reasons in your 11 years experience, for the lack of information on the information boards.
03/02/08 Peter
-22

Fair UK please, you mentioned to train UK Police Officers like the US, Why? If anything the training will teach them how to sit there drinking tea and eating doughnuts, I want to be a Police Officer and I think the only thing the Americans can teach us is what gun we should choose when siging-up.
31/01/08 Lee
6

Why don’t you spend a day or two out with them to actually see what goes on?

I am a traffic officer I have spent the last 11 years working on the motorways ensure they are maintained and safe for the road user to use. Road user that includes motor cyclist who don’t have the same level of protection as car drivers at high speed.

All incidents are based on their merits and all the people involved in them have to kept themselves safe as well people driving passed them. So the next time your cocooned within your vehicle other than trying to work out what is going on maybe you should concentrate on the road ahead and everyone might get where they are going a bit quicker.
30/01/08 lane hogger
-7

Sounds like another fine example of leadership from the British Police (sarcastic if you can't tell) The UK is only a few days away from everyone turning into an Amoeba in a display of reverse evolution.

How this nation ever got to rule 1/4 of the world I will never know. We need a Govt that will spend ROAD tax money on the ROADS, instead of just hoarding it and bleeding off money for their children at university.

Also Police should be trained militarily like in USA and Canada, so they have some discipline and to weed out the lazy ones who just sit their drinking tea, like the poster said.
30/01/08 Fair UK please!
5

Breakdown recovery - listen to the man at the front!