I have just come back from a live concert at the NEC arena in Birmingham and I have got to say that I am less than impressed with what I received for my money.  Of course the bands that I went to see were great, at least I think they were because the sound quality was so dismal it was hard to tell.  It was like listening to a radio playing in the bathroom of the house across the street!

We paid £42 each for our concert tickets which included all the usual booking fees.  That's a lot of money for a few hours of live entertainment and I've heard stories of concert tickets that cost a lot more.  Luckily we didn't shell out an extra £7 for parking having come by train but I consider £3.50 for a bottle of beer to be somewhat steep!

We were seated in one of the stalls, half way towards the back and on the front row.  The view of the stage was okay, a bit small but you expect that with such a large venue and the large screens go some way towards compensating for that.  It's the dreadful sound quality that has really put me off ever going to a venue like this again.  The support band came on early and to be honest the standing area wasn't very full.  I wasn't too worried about seeing them and therefore wasn't too concerned by the sound quality.  I thought that as the place filled up there would be less of an echo and sound would naturally improve. 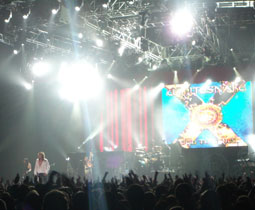 When the headline bands were playing the sound had improved somewhat, but not to the extent that I had hoped.  The vocals were quite muffled and it was quite difficult to pick out individual instruments in the wallowing cacophony of sound.  Not an experience to my mind that was worth the price of the concert ticket.

On another occasion I took my girlfriend to see Gary Moore and BB King at Wembley Arena.  This was once in a lifetime opportunity and one that I was looking forward to.  The experience here was quite similar except that you couldn't even see the artist on stage.  Perhaps the sound quality at Wembley was a little better but they didn't have the large screens there and our seats didn't have a very good view of the stage.  My girlfriend had to Google Gary Moore when we got home just to see what he looked like.

To be honest I'd rather go and see bands at the smaller concert venues where you can at least get a good view of the stage from all seating areas.  The sound quality tends to be so much better at the smaller venues too so you get a better performance for your money.  Going to see a band in a pub, community centre or civic hall too is easily a far more satisfying experience than the likes of Wembley Arena and the NEC arena.  I don't think I'll be going to either of those venues any time soon.

My wife went to see if she could book a musical online. The ticket prices were £147 each. I think it would be cheaper to travel to Milan and go to the Opera there rather than here
06/12/13 Musical Chairs are Expensive
6

Just seen Jamiroquai at the LG Arena in Birmingham and although the band and Jay Kay were clearly on top form (2 hour set - non stop music - no padding etc) the sound quality was abysmal. I couldn't pick out his great voice, any of the backing singers, musicians - it was just NOISE! I appreciate they are trying to fill the space with sound, but there was so much distortion, echo etc - It was just loud noise! Would love to see and more importantly hear Jamiroquai again in one of the smaller venues like they used to play back in the day as they are a quality band - but I will never go to a large venue or stadium ever again, complete waste of time and money.
19/04/11 Baz
3

A good gripe. Avoid the O2 Arena in London for the same reasons, Massive screens, and the sound a little better than Wembley tends to be, but you're basically checking out some musical ants, the band is so far away. You're better off inviting some mates round to watch the DVD on big flatscreen, while you drink unlimited cheap beer from your own fridge.

At the back of the O2, the seat tiers are so steep that you have the added amusement of easily tripping on a step, falling and breaking your neck. I have actually seen this happen, but so far there's always been some unlucky bod lower down to break their fall!
03/06/09 LondonSE8
39

I couldn't agree more. I too have all but given up going to large concerts for these exact reasons. I thought I was getting old and grumpy by waiting for the £15 DVD to come out after the event but actually it is very sensible.

Another really irritating thing about large live venues is when they put very bright lights BEHIND the artist so you are a) blinded and b) REALLY cannot see them!! Oh and don't forget the REALLY irritating and ignorant people in that 'atmospheric' crowd out to spoil your fun.

My other top tip is to wear ear plugs - not only to protect your hearing, (which once it is damaged you will never replace), but you will actually hear more as all the distortion and top end is removed.

I also wholeheartedly agree that tribute bands are usually better value - monetary AND entertainment value that is!

So save yourself the expense and disapointment of large gigs and wait for the DVD!!! Greedy bands and poor production don't deserve your support!
27/08/08 Musiclover
7

But don't bother going to see Magic - A Kind of Queen!
No excitement, lead singer can't touch the high notes.
They have got some really good reviews on the internet which I can't understand.
09/08/08 grumpyoldwoman
0

Go & see tribute bands in a pub or small theatre instead! Much better value & there are some really good ones around.
09/07/08 grumpyoldwoman
11

It's great if you can get right up to the stage at a large venue - or just a few yards back from it, but the tickets for such a position are normally astronomical, either that or you have to be very, very quick when booking. Large concert venues are great for a small number of people, the rest have to put up with what they can get.
02/07/08 Rob
7

I love listening to live music, but I hate going to large concert venues for all the reasons given. A waste of money, in my opinion. However, I appreciate that some people may greatly enjoy the 'atmosphere' at such venues - each to his own really! Although, having said that so many people also feel the need to take drugs which suggests that they would otherwise find the whole experience to be very boring; after all, what is so great about a postage stamp size stage (unless you have a great viewing position) and poor quality sounding music? If you refuse to take drugs like myself, then the accusation will be thrown at you that you are 'boring'. Mmmm . . . doesn't quite make sense to me!
01/07/08 frankieshrops
11