I went to a concert recently, the first one for quite some time and it was quite an eye opener because although I managed to get quite close to the front of the stage, I didn't actually have a particularly good view of the band I had come to see!  For once it wasn't because of the tall man stood in front me.

The problem was that I couldn't see anything due to the fact that everyone in front of me had their arms raised and they were all holding up their flaming mobile phones and cameras!  This happened literally within the first few notes that got played, suddenly everyone stuck their camera phones in the air.

I didn't pay forty quid for a ticket just so I could look at your bl***y mobile phone!"

It was absolutely ridiculous and to me this is quite a selfish thing to do.  I've paid good money, and in my opinion quite a lot of hard earned money to watch live music, but I have to dodge back and forward to catch the odd glimpse of anything on the stage. 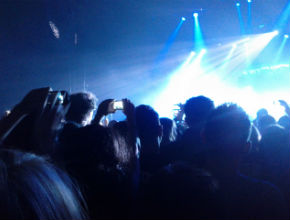 Apparently I'm not the only one who thinks so.  I heard a woman not that far from me yelling out something along the lines of "I didn't pay forty quid for a ticket just so I could look at your bl***y mobile phone!".

Why do people do this?  What's the point of recording a gig, or even worse little snippets of one on a mobile phone?  The sound is at best crappy and the video quality even on the decent Android phones is never going to equal the quality of the professional recordings.  Why don't people just enjoy the live music music with their eyes and ears instead of through a 3 or 4 inch LCD screen?  They'd have a much better memory to take away at the end of the evening after all.

I'd go as far as to say that these devices should be banned from auditoriums but I'd imagine trying to do that would be a logistical nightmare.

A true music fan goes to a gig to enjoy the experience in real time. Unfortunately as with a lot of things in life these days the 'here and now' experience of a gig is ruined by selfish pretentious idiots who have no consideration for other people. I can understand people taking the odd photo, but there is no point in filming even short clips. The memories of being part of the concert will be cherished far more than a lousy video
21/05/17 Nebbish
3

I totally agree. Having paid over £80 for a ticket to see Roger Waters at Wembley my enjoyment was rined by imbeciles waving their arms in the air to try and get a photo and irritating illuminated screens. In contrast I went to the West End to see Thriller and was delighted when it was policed to stop people taking photos with their phones. Cameras are banned so why not phones?/
16/11/13 cc
1

Don't get it. They just watch the gig via a phone recording the gig. Then watch said gig on phone later. And then post photos of gig onto Facebook. And frankly, nobody is interested in photos of gig! Enjoy it for what it is, live music!
05/10/13 D
0

The key is to frequent concerts that are more so free or no one cares about or those DJ concert (meh.. its just a guy standing there and bobbing his head..). I went to concerts hosted by my uni and the acts were mostly DJs (steve aoki and Swedish Mafia) and there's no point is taking a pic or video bc the stage is not doing much. Also, the concert becomes focus on dancing.

Then there are other acts that are more rock and people usually just take a small snapshot or video. Ain't nobody gonna waste memory on recording the entire concert of some act they're not a huge fan of.

I notice the prevalence of these cameras goers are mostly at concerts where they actually paid $$$ to go. As in big fans and most likely brought the album. So they want to savour the moment. In my opinion, they need to stop. The videos are mostly bad quality and the shaky hands...
13/07/13 lala
-2

its an unfortunate thing that they will do it because they can, what's the point of standing there with your arms sticking out filming on your mobile......if they want to say "I was there" they should take a quick picture, get their picture taken, then put the phone/camera away......buy the DVD if they like the music then that gets them a good quality recording made by a professional camera operator with good kit, good picture and good sound.....and it supports the band/act, instead of many many bad quality clips getting put on the internet....
05/04/13 glasgouser
-2

I'm amazed people still go to the cinema. You can have something not to dissimilar in your home these days if you get a big screen tv and link it to a decent sound system. I'd rather see a blu-ray movie at home any day.
22/11/12 Alien fan
-7

I hate public places these days...full of selfish ar*e holes who don't give a sh1t about anyone else. I never go to concerts any more because I can't stand the ear-splitting squeals and hoots from girls who are totally self-centred and usually pig ignorant.
22/11/12 Mr Rupert
1

@SteveK Adam Ant has openly said on shows that he wants people to bootleg his shows and put them on Youtube as it gets his music out there. So I don't think he cared about the phones tbh.
21/11/12 justsaying
-3

I went to an Adam Ant gig at a small venue, last month. I was up in the gods looking down at the stage, and there was a sea of mobile phones being held aloft. It didn't bother me but I do think it annoyed Adam, not that it affected his show. He was brilliant.

Maybe not much different to lighters being held aloft, to be fair, but I can see how it may be seen as disrespectful.

Security did target a couple of video cam users and I didn't notice them filming again, but mobile users were mainly left alone.
21/11/12 SteveK
-1

Just about describes a large section of the population in this ...sole of a country.

I have never had the problem of people recording the movie at a Cinema like Baz mentions, but once was disturbed by groans and moans from the back of the cinema as two people obviously found the movie a little boring and decided to have their own fun.

I went outside reported it to an usher and when the movie ended I stood and clapped and shouted BRAVO to them as the usher walked in with two policemen haha!
20/11/12 justsaying
0

Most devices having said that are actually banned but security allow the items to go into the arena, how can they deny a punter entrance because they have a phone.

Simple really sadly if you don't like it don't go to the concert, the concert cannot be that good if your complaining on here about people recording the concert !!
20/11/12 justsaying
-7

People don't give a monkey's anymore. That's the reason I won't go to the cinema, people don't care if they sit and chat on their mobile through the film or talk to their friends sitting next to them throughout or make as much noise as possible eating sweets or crisps or popcorn. If you ask them to tone it down you'll get a torrent of abuse. So I always wait for the DVD to come out.
20/11/12 Baz
16