I can sympathise with cyclists when they say that they feel unsafe and threatened on our roads due to the amount of traffic and of course through the actions of selfish drivers.  Traffic volume has increased quite dramatically over the years and our cyclists on the road are not always well catered for.

What I don't understand is why some of them, when after they've acknowledged that a fast moving metal object can seriously injure someone, ride their cycles on the footpaths, weaving between people, creating obstruction and generally risking the health and wellbeing of pedestrians, in order to avoid being injured on the road themselves.  Pedestrian crossings seem to be fair game to them as well.  Children and especially the elderly stand very little chance if hit by a solid speeding handle bar in the ribs or step out of a shop and into the path of one of these inconsiderate individuals.

Not only that but when confronted about their antisocial, illegal and dangerous "driving habits" they either immediately assume the moral high ground and arrogantly tell you to get out of their way, or you're ignored as if you don't exist, the very same behaviour described when they complain about inconsiderate motor vehicle drivers on the road.  If you wish to come off a stretch of road and use a footpath, get off your bike and push it.  It's the law. 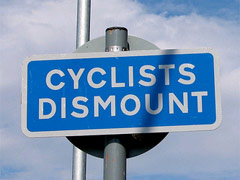 Just one example; not so long ago my wife and I were on holiday in the Lakes and were walking along a narrow footbridge which clearly bore the sign, "Cyclists Dismount" and even had a picture of a bike with a red line through it as you entered onto the bridge itself.  Halfway across the bridge and we were forced to squeeze ourselves to the side as a cyclists came past, tutting at the inconvenience of our presence and having had to slow down. Of course we were just ignored when we pointed out and quoted the signs at either end of the bridge.

Would any cyclists who do this like to explain why they put others at risk of injury, I'd be interested to understand the reasoning for your actions.

Cycling is a popular and healthy alternative to the motor car with the obvious environmental advantages, but please, don't justify your actions by saying that cycling on the road is too dangerous for you and then transfer that danger to the pedestrian on the footpath.

Pedestrian
"If pavement cycling becomes allowed then cyclists get what they want" - You're a bit slow on the uptake. Shared-paths are an official acknowledgement that cycling on the pavement isn't remotely as dangerous to pedestrians as the fact-challenged cyclist-haters make-out.

As to what cyclists want, you're clearly no expert and you're wrong. I'm led to understand that few keen cyclists would want to cycle either on the pavement or shared path, because it's slow, it's rough, it might have pedestrians, dogs and other obstacles. It's often also in the door-zone. Regular cyclists, as I understand-it are generally divided into two groups, those who want a) child-friendly, off-road, segregated infrastructure that's free from motorised traffic, pedestrians and their dogs & etc., purpose designed with a fast surface and fit for purpose and suitable for a wide range of bicycle types; and the MAMILs etc. aka road racers who often want b) to cycle on the road. I'm unaware of any polling of pavement cyclists, but I suspect they would opt for choice a).

Now, cycling on the pavement isn't desirable, but it's an understandable reaction to bad and aggressive drivers frightening cyclists off the road (it only takes one). It's simultaneously illegal and permitted, when carried out responsibly.

Of course, it's often claimed that pavement cycling is dangerous to pedestrians and that it typically implied that it is the only danger facing pedestrians. This is a deceit. The truth lies in the statistics, a pedestrian is at a much greater risk from motor-vehicles, than pavement cyclists. If you maintain otherwise, prove it.
19/11/15 Freewheeler
0

anon,
"Cyclist on the pavement, bombing by me and making me jump out of my skin." - No contact, therefore clearly not remotely dangerous, which is the subject here.

Don't get me wrong, I don't like pavement cycling, but at night, that's when the boy-racers are around, and they're going really-fast, not riding at 12-15mph which I suspect is flat-out on the pavement (most of the ones I see are either riding mountain-bikes with knobbly tyres, or riding sensible bicycles with mudguards, both of which are slow or really slow), the boy-racers are doing more like 50-80mph.
If anyone is endangering anyone, it's the boy-racers.
11/09/15 Freewheeler
0

Middle of the night. No cars on the road. Cyclist on the pavement, bombing by me and making me jump out of my skin.
11/07/14 anon
0

I live in the USA and, when I'm going *TO* the grocery store, I ride my bike south on the sidewalk due to it being, I believe, against the law to ride in the bike lane going the opposite direction to the cars on that side of the street, and there are no stoplights between my house and the major street where the grocery store is located, so I don't really feel safe crossing to the correct side of the street. I always ride slowly and if I see a pedestrian approaching, I pull off to the side into the rocks and wait for them to pass. I feel like this is a sufficient compromise: not breaking the law, not risking my life, but not risking injury to others either.
19/06/14 PatriciaT
0

Yes sandman, they do.

Yes squiggle, I would.

I did not catch that story sandman, though I have just googled it. It seems that the offensive anti-social activity of riding bikes on the sideWALK may be an endemic problem in other countries too.
20/09/13 sideWALK
-5

Cycling on the sideWALK is bound to be a problem everywhere because the two necessary ingredients are everywhere: bicycles and selfish, ignorant people.
09/08/13 sideWALK
-4

"Nobody is saying it is"

"Not living in London means that cycling on pavements is almost an irrelevant problem."

Nobody is saying it is, but it is undoubtedly the area which has the biggest problem. Many of the places you mentioned were also developed in a Victorian age, as was most of this country, so the problem will exist in most established built up places. the infrastructure was not designed to accommodate the amount of road traffic that it currently has to bear. That in itself drives cyclists from the road as it is a very dangerous place to be at times.
08/08/13 Freddie
-4

I don't think that pavement cycling is considered a problem just in London; I have friends and family in places as far apart as Bristol, Hull and Norwich and it is a topic that comes up regularly in local newspapers and safer neighbourhood/community police meetings.
08/08/13 Fed up Pedestrian
-3

"Sorry but that was an American dictionary. In Britain there is a clear distinction between alternate and alternative."

No, it isn't. I don't mind some Americanisms and I know that language is a living, changing thing. It isn't static, but the above habit deprives us of a useful distinction

I am assuming you are quite young as older British people don't make that mistake. Your problem is that you have been using the incorrect word your whole life and had to use a dictionary to look it up whereas most of us already knew the the difference. As grumpyoldwoman - she would never make that mistake.

It's unimportant really - I would never normally say such a thing but you started the whole petty episode. I will say no more on the subject as it's getting silly.

Going back to the subject, I am just going to repeat what I said as it all I need to say,

'Like "walkordrive" I have no axe to grind with cyclists in general, only those who ride on the pavement. I don't understand people who go on about helmets or lycra. What does it matter what they wear?

I just think it's dangerous to pedestrians and even when they are not hit it makes many people anxious and worried, especially older or disabled folk."
05/08/13 walking here
4

"Sorry but that was an American dictionary. In Britain there is a clear distinction between alternate and alternative."