You're driving your car along the road and come across someone in the road. You then stick your head out the window and yell to them, "move because I'm not stopping.."  For whatever reason, they're still in your way and there's a collision as a result.

If they subsequently lost their life because you ran into them, you'd expect the judge to throw the book at you wouldn't you?  You'd expect no less than to spend a very long time sharing a small space with a big guy called Ron and quite rightly so.

So why is it then, that a cyclist who did exactly this gets off with a £2,200 fine? (source: BBC News)  It just doesn't make any sense and as the father of the young girl in this case said, the punishment was "laughable".  Well I for one agree with him.  It's about time the law was changed so that cyclists are as accountable for their actions as any other road user. 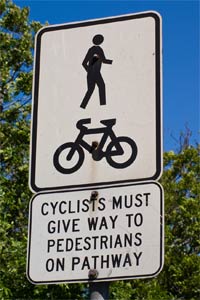 It's a few bad apples that spoil cycling for everyone

I've lost count of the number of near misses I've had with selfish cyclists over the years myself, particularly as a pedestrian in places like Oxford and London.  Some of these idiots think they have priority over everything else around them, pedestrians, cars, because they're all treated with the same contempt.  A quick ring of the bell and everything and everyone is supposed to get out the way.  As for traffic lights, pedestrian crossings and pavements, they're all treated as cycle paths by these arrogant and selfish cyclists.

I'm not pointing the finger at all cyclists because I am aware that the vast majority of them are law abiding and considerate.  It's a few bad apples that spoil cycling for everyone and by the way, I don't advocate a change in the law to such a degree that cycling becomes inaccessible.

Accidents involving cyclists, and in particular relatively rare cases where pedestrians have come to harm should be at least be treated as seriously as they deserve to be.  What say you?

I agree with the over fella. It's all a nightmare with these daft 'cyclists', like not giving way for cars. The other evening I was at a T-junction. One driver gave way to me and a 'cyclist' did not. fool was he - needed a stern talking to by a police. Was he on drugs? he should of been tested- Mineral water for me whilst driving of course, his dubious behaviour was not quality road usage. If a police was about, I may of been told off. Pay a fine maybe. one would need a webcam to prove the 'cyclist' was in the wrong.

It's simply not possible to bring these individuals to book, and I value a good driver. Most 'cyclists' are rubbish, far too bad at road sense.
30/07/14 collar
0

What a kind cyclist. He could have just run into you and claimed for all sorts of damages. You would have had to explain to the judge how you only give way to motor vehicles and not to cyclists.
30/07/14 Fred E
0

I was waiting to pull out of a narrow street where a motorist with a cyclist behind him wanted to turn into where I was coming out. The motorist slowed down to let me out and the cyclist didn’t wait but undertook and was getting close to the junction as I was about to pull out.

As the cyclist wasn’t close enough to be put into danger I pulled out in front of him as I wasn’t going to wait for him to pass when he should have waited behind the car which was giving way to me.

The cyclist waved his hands and made remarks at me. If there was no car in front of him and he was where he was I would have waited but he was too impatient to wait behind the car so I wasn’t going to give way to him as he is the one who should have waited, not undertook and expected me to wait until he had passed.
30/07/14 WreaGreen Motorist
0

And once established there will even be a benefit to pedestrians for a change. There will be no excuse for cyclists to ride on the pavements any more!
10/03/13 Sally
3

I do not understand the problem here. If a cyclist passes a red light or crosses a pedestrian crossing whilst people are on it etc they have broken the law and should be treated as such. The laws are there for all road users not just the motorist. Having a rant about the motor car is totally missing the point. By the way, I am a cyclist myself.
08/06/12 I am Dave
0

But I didn't have an elderly mother or any shopping or any furniture with me. Most of the throbbing beasts only had one person in them. Most looked like they were just coming home from work like myself. I might even use a car myself to go on holiday with lots of people and luggage etc. The trick is to use the right vehicle for the right job.
01/06/12 Fred E
-3

Fred, I may have said so before but I really don't know how you'd manage to get an elderly mother and a week's shopping for 3 people on a bike!

Or then maybe some of the people you saw were trying to get to the airport for a much needed holiday. 100 miles with 20k of luggage on a bike?

I know you are rabidly anti-car but they do have their uses!
01/06/12 grumpyoldwoman
-8

Just come home early on a beautiful day at the start of a bank holiday. Line after line of sleek noble beasts each one sniffing the emissions of the beast in front. The internal combustion engines all throbbing, but none of the beasts moving anywhere. Along came Fred E with the selfishness of youth, passed the lot on a bicycle without a spot of bother. I think a few of the beasts growled with anger, frustration and jealousy but what could they do?
01/06/12 Fred E
-4

Fed up pedestrian; I personally believe that deaths on the road WERE properly investigated before this "every death on the road may be a crime and should be treated as such" measure was introduced. These days nothing is allowed to be just an "accident"; somebody has to be to blame. Accidents DO just happen!

Then of course there are no figures recorded of how many accidents are caused by diversions funneling all the traffic from the closed road onto roads which aren't designed to cope with it, and other ways "secondary" accidents occur.

A while ago I was delayed by a bad accident; several hours after the accident had happened I saw the aftermath of another accident which had happened in the held up traffic. A body was being removed from this secondary accident and I can't help wondering if that person would have lived if the road had been cleared more quickly.

You are right to say that increased speed increases damage done in accidents; but it's better if you don't hit somebody in the first place, which is why drivers need to pay more attention. However if you are driving along a road with a limit set well below the 85th percentile speed accidents are statistically more likely to happen. Setting the limit at the 85th percentile speed gives the lowest accident rate; lower or higher and accident numbers go up!
31/05/12 grumpyoldwoman
-9

GOW, although I agree with you on some subjects, it's right that a death should be properly investigated, something that cannot be done after everything has been cleaned up. It's unfortunate that this holds people up but hardly compares to loss of life.

Speed in itself may not cause accidents but it increased the damage done and the likelihood of death to pedestrians, cyclists and the occupants of cars. Getting there in one piece is more important than getting there fast.
31/05/12 Fed up pedestrian
3

"More than 400 people are killed each year on pavements by...motorists"

"So would people who hadn't passed their green cross code exam and not paid third party pedestrian tax be confined to their homes?"

This is "reductio ad absurdum", a sure sign that someone has no sensible point to make.
31/05/12 Fed up pedestrian
-3

Fred E and Carskill; if the issue is numbers killed why are you not both trying to do something about accidents in the home? More people are killed or injured in this way than on the roads, a fact usually ignored by "road safety" campaigners who are often out to make money from motorists.

Fred, you said "As it is the blood is quickly cleaned from the road, the bodies whisked away to mortuaries". Have you ever seen the chaos caused by a fatal accident? Years ago getting the traffic moving again was seen as the priority; then a Welsh idiot decided that all fatal accident scenes had to be treated as potential crime scenes. So now the traffic is held up for hours while the "crime scene" is investigated down to the minutest detail. The drivers already on the road are definitely not a priority; how long they have to wait matters not a jot.

Fred, don't put so much emphasis on keeping to speed limits; many are now set far below the 85th pecentile speed and are therefore too low. As you say drivers taking more care is definitely what is needed. Lack of attention is what causes accidents, not "speeding" in itself.
31/05/12 grumpyoldwoman
-7

It is interesting how people are shocked by lines of dead bodies such as those coming out of syria at the moment. There are similar lines of dead bodies caused by motorists every day in the UK but nobody wants to talk about the issue. Most of the collisions could be avoided if drivers actually kept to speed limits, looked were they were driving and just took more care. As it is the blood is quickly cleaned from the road, the bodies whisked away to mortuaries and a quiet funeral held for grieving families. Some councils even object when families leave a memorial to the dead at the roadside.
31/05/12 Fred E
-13

Over 2 grand? Far more than the fine imposed on motorists who kill and that's with added complications such as being uninsured, drunk or unlicensed! Check the facts, I'm not being contrary on this. More than 400 people are killed each year on pavements by...motorists. However, an incident with someone on a bike (who will likely be even more dangerous in a car in all probability) comes along and its used as a distraction for the real issue out there...motorists who actually do the killing on a biblical scale. Anyone on here keen to tackle that elephant in the room or should we move on to kids on skateboards who 'terrorise' pedestrians?

Strikes me as very odd how people are so keen to chastise the source of what is of course a terrible and wholly avoidable incident whilst turning a blind eye to the real issues out there resulting in death and severe injury. Something to think about isn't it?!
31/05/12 Carskill
-6