I've just seen your article on people who park on pavements.  I live in Bangor, North Wales and the streets are really narrow, but the pavements even more so.  In fact they are so narrow that you can barely get two thin people walking along side by side.

This morning, I was walking into town and I noticed a big white van parked half on the pavement.  I stood for a moment - there were two men inside having a sandwich.  Very considerate of them I thought, sitting there having lunch while obstructing the pavement.

They could easily have seriously injured me...

I hesitated for a couple of minutes.  Should I risk my life by walking in the road?  Or go the long way round?  How about waiting for them to move?  In the end, I decided they would be a while and walked between the van and the wall - so I basically had half a pavement. 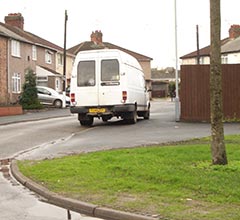 I'd only walked a few steps when, to my horror, the van started moving.  It pulled off the pavement out onto the road and as it did, the back swung round and almost hit me.  I couldn't believe they hadn't seen me or even checked whether anyone was between them and the wall.  They could easily have seriously injured me as I was trapped between the wall and the van.

I am so furious because they just drove off without a care in the world and I was left standing on the pavement shaking.  Ironically, there was a sign on the back of the van "How's my driving?  If my driving is less than courteous, phone......"

I was too shaken to get the number of the van.  Next time though, I think I'll take a photo of them and send it to the Police.

Well i think its up to your local council to stop this parking on the pavement and if anyone is injured trying to pass or go around these idiots then i think its the council you should sue for not keeping them clear ,they charge us for sitting on yellow lines so im sure they could fine these idiots to .
08/02/14 racehorses
-1

Parking on the pavement is ILLEGAL unless signs say otherwise. Whoever came up with the idea of legalised pavement parking is an idiot! Kindly keep your cars of the pavement please.
14/01/14 raging kiwi
3

This morning, there was a white van parked on the corner of a T junction, half on the road, half on the pavement. Pedestrians didn't have room to use the pavement so they were forced to walk out into the road and take their chances while trying to get round the van. Meanwhile, cars were coming from all directions, some flying round the van and terrifying pedestrians who had to jump back out of the way. To the halfwit driver of the white van - how would you feel if it was your wife that had to put herself in danger because of your pathetic attempt at parking?
23/09/13 Angry observer
1

Call health and safety , get them to come and look , call the emergency sevices. ask what they think about the chances of getting through if they are needed
10/08/13 I DID
5

Just an observation... Does anyone else have a sneeky suspicion that Mike P visits this website on a daily basis and in particular any gripe where he has made a comment in order to up his comment rating and put anyone elses down that he happens to be having a petty disagreement with? His rating on almost all of his comments suggest he's either very well respected with views that 99.9% of people agree with enough to click that little green button or possibly a little bit lonely with too much time on his hands.
I have my opinion, I'm sure he will have his.

Terry : You're not the smartest tool in the kit are you?

Read my posting and tell me how you think I knew that the driver of the offending vehicle was a woman before I saw her leave the shop and return to it?
28/08/11 MikeP
1

Freddie : There was no room for me to pass on the pavement without squeezing past into the very narrow space between the side of the vehicle and the wall. No way was I going to walk in a busy road, specially with a dog on a lead. Whilst I might have foreseen that damage could occur, it was unavoidable.

But it wasn't accidental was it! It is obvious that you intended it.
I'm not one of those that jumps on everything you say on here. I often agree with you but on this occasion you were out of order. There's no excuse and no justification. It's just wrong, simple as that!
27/08/11 Freddie
-25

"It doesn't give you the right to wilfully damage her car."
Any damage caused to her car was purely accidental and would not have happened if I had not been forced to squeeze past.

So you decided to punish her by committing criminal damage to her car!
So who's the worst then? Her or you?

It doesn't matter how she parked or how rude she is. It doesn't give you the right to wilfully damage her car. You should feel ashamed of yourself!
27/08/11 Freddie
-19

I was in a shop the other day and a car was parked on the pavement outside, almost entirely obstructing the passage of pedestrians, who would have been forced to walk in the road. Need I add it was a Chelsea Tractor type, and that a parking area was available just a few yards further on? Rather than walking in the road, I pushed past it, knocking the wing mirror back, and regrettably the metal part of my dog's lead might just accidentally have come into slight contact with the shiny paintwork causing a scratch.

Inside the shop, a very rude woman pushed her way to the front of the queue at the paypoint, proceeded to harangue the cashier over the price of some item (is it the cashier's fault) and then as she left I noticed that she was the driver of the offending vehicle. A pattern of selfish ignorant behaviour.
27/08/11 MikeP
2