I was reading the gripe about horse manure on the road and I thought it would be an excellent opportunity to bring up something that has been irritating me for the last couple of weeks.  Yes, I'm afraid it's another horse manure story and this time it's not on the road.

I travel to and from a nearby village which is about a three mile round trip and I do this around two to three times a week taking my stepdaughter to school.  It's not that far and as I don't have car I tend to either cycle or walk.  It's a pretty busy road so I wasn't surprised when I saw a horse and rider on the other side of the road, not actually on the road but riding along the footpath.  Probably a very sensible thing to do because there are a few sharp bends and the traffic tends to be steady and fast.

Anyway, a few days later I'm cycling along this path (again, the sensible thing for a cyclist to do as the road is manic) and I turned a corner to run into a whole load of horse manure.  There was piles of the stuff, some quite large and it was generally spread up the hill for about a hundred yards.  I'm sure it didn't all come from one animal because there was a lot o it.  My pop would have had a field day (literally) because he used to keep a bin full of manure in the garden for the veggie patch. 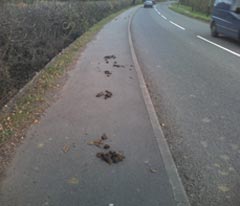 Now I know this stuff washes away (eventually) and it's not the most harmful substance in the world, but it doesn't half make a mess of things and it doesn't smell too great either.  Well why didn't you avoid it?  I hear you say  Well I would if I could, but it was more than one small pile and it wasn't easy to dodge.  As it happens we had to travel on foot for a few days recently (bike had a puncture) and it was quite challenging to keep the little one from stepping in piles of horse manure.  It was starting to get dark around then too which didn't help matters, plus a couple of rain showers and a hoard of school kids walking that way had spread it around even more.

Not suggesting banning horses, fining the riders or forcing them onto the road (definitely not around there anyway!).  But I think in this instance making the effort to pick up your horse manure would be a nice thing to do for the rest of us pedestrians and cyclists who also use the path.  It's one thing on the road, but on the pavement it's quite inconvenient.

Perhaps stopping by on the way back from the stables with a shovel and a few bin liners perhaps?

We have the same peoblem in my village. We had a nice new footpath laid at the beginning of there years, replacing what was essentially not muxch more than a dirt track. Almost immediately horesriders started using it, leaving it littered with horse faeces. Horses hacking along the footpath also pose a considerable danger to pedestrians, especially children and the elderly, who have to jump out of the way to avoid being trampled. One day, a pedestrian is going to be seriously injured or killed by these anti-social yobettes. Attempting to speak to the riders is just met with a torrent of abuse - "We don't have to clear up so you can f*** off!"
28/10 Walker
0

Interesting, but the facts are: As the road is manic that is probably why the rider was on the pavement. In fact in law neither bikes nor horses should be although there is a law from 1835 which says horses can use a footpath in some situations.
By law horse riders do not have to clear up behind their horse.
Maybe children if the stand in it after being told not to, should be made to "suffer the consequences of their own actions" either go round smelly all day, then have to clean their own shoes. Huge teaching possibilities.
11/04 Skylark
0

I totally agree with you, and by the way, horse riding on the footpath is illegal.
In the Main, they ride them for pleasure, not as a necessary form of transport, so why should the public have to tolerate the mess the horses make, I live in village where there are 3 women who ride their horses and show no consideration for anyone else who live there, it took the parish council four "No riding on the footpath " notices to stop them, as they simply tore them down, screwed them up and threw them in the street, Every week I and other residents have to shovel great loads of horse mature off the Main Street before cars and kids go through it and spread it all over the place.
02/02/20 Carlos
0

We had a horse riding mother at the local primary school refusing to clear up the mess right outside the school gate. She said it wasn't illegal and didn't have to clear it up therefore she wouldn't.
You can imagine the other parents comments and how she was treated after this incident. The next day the headmaster cleared it up as he didn't want it trod all through the school. He did however make his point by clearing it up into a wheelie bin 3 metres away whilst the parents were dropping off their kids(excuse the pun)
22/11/17 Trisha
0

Rule 52 of the Highway Code states that horses MUST NOT walk on footpaths or pavements : this is not 'advisory'. By definition "MUST NOT" in the Highway Code means it is a criminal offence. It is becoming increasingly dangerous to ride horses on roads in the UK, which is why I stopped. Apart from the risk to rider /horse there is the risk of litigation with regard to injury to motorists/ pedestrians. As a rider, you must be aware that your horse has the potential to spook or shy, therefore, should your horse end up in the road you may have to prove that you did not know that your horse had the potential to do this......get where I'm going? As a lifelong horsewoman I'm appalled at the arrogant little 'Lucindas' riding insane horses on public roads. And this also goes for 'manure' on roads. BHS states that riders should clean up 'on driveways and public areas' , but neglects to add that allowing a horse to be on a pavement or footpath, let alone defaecate on it, s a criminal offence. End of. It's no excuse that it's 'a dangerous bend' etc, you knew that before you deliberately took your horse on it.
09/08/17 Chica
5

I totally agree. Have just tried to walk down a pedestrian lane, tarmaced and only some 4 ft wide, to find horse manure covered in the usual flies, making my dog walk a joke really. Because there are numerous notices to dog owners to pick up the mess and a bin to leave it in - and then dog owners are fined if found not doing their public duty. So why are horse owners allowed to get away with it? This footpath is an access to a popular beach and so kiddies run down there - is horse manure not equally a health hazard to children?
26/07/16 Avril
1

Yes I totally agree with you, why shouldn't horse riders get their foul up! on our daily dog walk there's always piles of horse foul on the pavements and its disgusting! rules for some & rules for others! i always take plenty of bags with me. but, if i didn't clean up after my dog i would most certainly get fined!
27/06/16 Frederick
1

vc, I don't know about horses dumping on beaches; but the Apostrophe Demon appears to have dumped a load on your post.
22/03/16 grumpyoldwoman
0

This is a problem for me too. Riders on local footpaths. Police horses in the city centre. All freely drop their poop on pedestrian areas. I've never seen a rider attempt to clear up the mess. I'd like to see a bucket tied just beneath the tail. Riders need to be made accountable for this nuisance.
26/09/15 Davefingers
0

As a motorcyclist I am constantly amazed at the arrogance and double standards of horse riders.
I always give them a wide berth and try not to make a noise as I pass, the riders sometime acknowlege but for the most part ignore or gesticulate to slow down - even though I am already going slower than cars.
The lack of consideration they show ( not all but in general ) to other road users, especially two-wheeled, is remarkable. They allow their animals to deficate wherever they wish and make no attempt to clear up after them. This practice leaves great mounds in the path of road users, when this occurs mid bend the results can be chatastrophic.
I would urge our equestrian bretherin to consider others in the same way they demand consideration.
Sack it and sell it!
01/09/15 Red Avenger
1

To all the horsey types. It might be inert digested grass, but it still stinks to high heaven if someone's trod in it and then walks into your house unaware they have it on their feet. You might like living with the smell of a farmyard but some of us don't!
08/10/11 Caroline
3

Problems that cyclists have with pedestrians and car drivers

There aren't enough bridle paths in the UK