I hate bugs of all sorts, I really do.  But I particularly dislike the ones that fly around.  I know this isn't your usual type of gripe but I had to get this one off my chest.  This summer is turning out to be quite hot and there seem to be a lot more insects finding their way into the house than usual.

Okay, I'm sitting here and there's this thing has quite literally just crawled across my screen.  I have no idea what it is and I have no wish to find out!  I'd just rather it wasn't there.  The kitchen is littered with dead flies that seem to just come in and die every day.  That's a good thing though.  I prefer them lying on their backs with their little legs in the air as opposed to flying around and landing on food etc.

The house fly is a disgusting creature.  The only problem is I have to clear up the carnage every day and I'm wondering if that insecticide that the missus sprayed everywhere is responsible for the sudden death syndrome that we are seeing here.

Earlier this afternoon I happened to look down at the carpet and there was another thing.  It was about half a centimetre in length and crawled.  I couldn't see it's legs it was so small and it would only move a few inches when prodded.  It was a bug though, and it was in my home making it's way across my carpet. 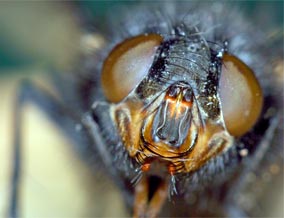 I hate all the other creepy crawlies including wood lice, cockroaches, mosquitoes, ants, wasps etc.  There are a few exceptions though.  I don't mind spiders and I can just about handle bees as long as they go about their business and let me go about mine.

Spiders are tolerated because they generally keep out of your way and usually don't intrude on your space, preferring instead to hide away in the corners and shadows.  Even better, they like to eat the bugs I hate, yes those damn flying insects again!

Moths and butterflies are okay too, although I find moths to be particularly stupid creatures.  Here's a tip though if you happen to find a few buzzing around in a room because you've left a light on at night with the window open.  Simply leave the window open and turn out the light.  If you close the window, you only trap them inside.  By dawn they're drawn to the light outside and usually manage to find their way out again.  Problem solved.

I know it's irrational and we need the bugs to pollinate plants, feed the birds etc. and generally keep everything in balance.  I also know that we as a species wouldn't survive without them, but that doesn't stop me disliking them, especially when they find their way into my house during the summer months.

I find it shocking how quickly the insect larvae infest our wheelie bin. The insect eggs are laid and no sooner can one blink and there are insect larvae everywhere. These insect larvae accordingly reach the imago state (flying insect) and the whole process begins again with the insect eggs. I am at my wit's end, and would do anything to stop this beastly, insectile chitinous lifestyle.
09/07/13 Joe from Splott
-8

Entered the scullery this morning and no less than 5 insects were in residence. It took me a half hour to shoo them all out, and after that I was quite put off my breffus.
26/06/13 jobby
-18

Now we have this humid weather down here, the garden is full of insects, all of them wanting to come into the house - it is just 'cupboard love' in my opinion.
25/06/13 Craig D
-19

Most spiders you find in our homes already live and breed there, especially older properties. If I'm not mistaken, the biggest is the Cardinal, named after Cardinal Woolsey who was terrified of their size in Hampton court palace. They are harmless to humans and very rarely bite. Females can grow to two feet across (only kidding), they do more good in our homes by hunting insects that can infest, so please, don't kill them, believe me they do much more good than harm.
23/06/13 Jethro
-5

johnson's 'Raid' seems to be effective in detering spiders - it is advertised as killing ants and cockroaches, but I have used it for 2 years now, and seen hardly any of the dreaded '8 leggers'. I just spray a bit round outside doors and window openings.
23/06/13 Craig D
-12

Insects can also be a pain when a light is left on at night, for the insects are attracted to the lamp and they will continually 'dive-bomb' it until they are exhausted or morning arrives whichever comes sooner. One way round this is to close all windows so the insects cannot gain access to the indoors, but on a hot night this can be very uncomfortable, as not everyone is lucky enough to have air-conditioning.
22/06/13 Cornish Roy
0

Since the garbage cart started calling once a fortnight, insects in the trash bins have become a problem. These insects eat any food they can find and then they lay their eggs, which hatch into larvae. The larvae hatch out in due course into insects, and the whole process begins again - inevitably, some of the insects end up indoors particularly in the summer months - ie June - september.
22/06/13 Cornish Roy
2

A couple of Venus fly traps in every room and your problem will be solved overnight. They eat anything and everything, moths, spiders,wasps and of course flys.
18/06/13 Craig D
0

I'm not too keen on Mosquitos but with a good repellent that includes DEET can combat that. The one Squibley that does scare the living day lights out of me are the big house spiders that usually appear Spring and Autumn, and yes they do bite.
26/03/13 JanieQ66
-1

I had to tick the box which said cockroaches because there's not one for bankers,so cockroaches will have to do!
23/02/11 Jethro
-4

Judge,saying that spiders crawl into our mouths whilst we sleep is a real kick in the crotch to the intellect of spiders everywhere. Although spiders are occasionally seen doing stupid things, it's safe to assume they have enough wit to realize when they're about to crawl through the mouth of a damned giant. If the giant white teeth aren't enough to deter them from going spelunking down your dark, wet throat (apparently no other animals have these) you'd think the heavy draft and deafening snoring sounds would be some sort of indication of how terrible a home your mouth would be.
12/01/11 DSG
-20

Use citronella around your windows, bugs seem to hate it.
better still get those pitcher plants or a venus fly trap they love to devour bugs
29/11/10 angry guy
-14

Mosquito bites are a real pain, how do you stop them?