A friend of mine told me recently of the dangers she has encountered with cyclists, especially when crossing busy roads in London.  When the traffic lights turn red and cars have to stop to let pedestrians cross, there is nearly always a cyclist who rides through the red light and almost hits these pedestrians.  My friend who has difficulty walking has almost been hit by some of these people.  It is almost as though they think its their right to go through red lights and not think of those who are crossing.  Some of them have no patience either with pedestrians.

cyclists do dangerous and silly things

It is not just at crossings, but also on roads I have seen cyclists do dangerous and silly things.  Firstly, on very busy roads they take their families of very young children to cycle.  Personally I think this isn't safe as its an accident waiting to happen.  Some cyclists have their baby/toddler strapped in front of them.  Isn't that illegal and shouldn't the child be seated on a bike?  Also, I once saw a cyclist spit on the road whilst cycling along.  Absolutely disgusting.  Then there are those that seem to think its okay to make rude gestures at those who drive cars for some misdemeanor. 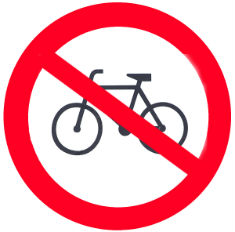 There is a cycle lane near my house which has the purpose of providing a place for cyclists to cycle on instead of the main busy road running parallel to it, but some of them use the road instead which defeats the whole purpose of the cycle lane and it makes it difficult for those driving as they have to slow down to get by them.

Some cyclists don't use lights when cycling in the dark.  So how is anyone meant to see them and avoid hitting them at night?  Once a cyclist hurled abuse at my mum when she was out driving one night saying that she should read the highway, even though he was actually the one at fault for not wearing fluorescent clothing at night and making sure he could be seen!

In Richmond Park, when I was with one of my friends we were almost ran over by a guy riding his bike and he was so rude to us saying we were in his way.  When they are in Richmond Park theyre supposed to use the roads which makes it difficult for drivers to get anywhere in the place, not to mention how dangerous it is when there are lots of cyclists in the area.  They slow the traffic down as well.

I understand that cycling is a green alternative to get to places but it is not that safe in my view.  I have never ridden a bike because of bad experiences.  I'd rather use bus, car, train or even a horse to get to places.  In fact, if people REALLY want to be green then they should ride a horse to wherever they are going - provided there is not too much manure left on the road of course!

Angry Autistic Female
"When they are in Richmond Park theyre supposed to use the roads which makes it difficult for drivers to get anywhere in the place, not to mention how dangerous it is when there are lots of cyclists in the area. They slow the traffic down as well."
I thought that autistic individuals were supposed to be particularly careful about accuracy, you seem to make numerous false claims.
Richmond Park has a 20mph limit, it is intended as a destination in itself, it is not intended as a rat-run to go somewhere-else. The roads are liable to blockage by herds of deer (it is a deer-park BTW).
There is not sufficient speed 'headroom' for motorists to overtake most road-cyclists without the motorists themselves speeding, although that doesn't stop some from trying. It sounds like you are one of the speeders, I hope you get ticketed.
Bicycles are not restricted to the roads, which you should know, if you've visited the Park.
Park map, showing cycle paths.
http://www.parkcycle.co.uk/maps.aspx
11/09/15 Freewheeler
-1

Someone doesn't like reasonable questions. How pathetic. Would that be you, collar?

collar
Since when did Whales need or have a road system? Whales swim in the ocean and have migration routes, but roads?
30/08/15 Freewheeler
-1

Working and taxed.
'Cyclists and their bicycles must be registered and insured for third party accidents.' Absolutely, and get these wretched individuals paying their share of road-tax too - When they are not on the pavements terrorising vulnerable pedestrians, they are enjoying our roads scott-fee.'

Like most normal people, Collar enjoyed riding a push-bicycle when he was a youngster. Then like most normal people he moved up to that superior piece of technology, the motor-car. Now the latest one - registered keepers ought to get identified with a plate on their vehicle if lit all is well, but you will get into trouble if the plate is dropped from the vehicle.

The registered keeper should be automatically identifiable and punished for such actions of being not identifiable else it makes a mockery of the law. Their vehicle could be a bike or a car, it is nothing to do with the driving just so the keeper can be identified.

Does this mean push 'cyclists' will get points or punishment if they don't buy a road fund licence disc on their vehicles?

It looks like this was all thought up by the road people in the government Elite who decide such things and not before time. This will make driving society fairer and make everyone adhere to road laws and be polite with each other over trivial matters while they continue their daily driving.
03/10/14 collar
1

Goes right thru two people when green man is on

Then says “ you need to look where you’re walking ... innit?”

Then mounts the pavement

Still convinced he is some kind of victim

I wouldn't hold your breath. They've done nothing about the Welsh thread yet.
29/06/14 Freddie
0

To the person who knowingly posted in my name on 28-Jun-14 23:50, please show a little courtesy and don't do that again.

What you have said is clearly not what someone calling themself reclaim the pavements would believe.

Grow up and have some manners.

We need a return to full use of the roads. For the past twenty years and more there has been a deliberate policy practiced by motorists across the whole of the road system, including Whales, of having cycle lanes between 5% -30%. This is so wasteful of road surfaces. Let's stop cycles going on the car lanes from the word go, and make things better for all road users. It will "cost" more initially, but will save in the long run.
29/06/14 collar
0

Basically every road needs a pavement, a cycle path and a lane for motorised vehicles. The vast majority of roads are wide enough for this not to be a problem. Every road that is being resurfaced or built should be to this specification. The government would say too expensive. So why have they got money to build a new train line that nobody wants? Just go to Holland to see how it should be done. Forget the new train line and sort the roads out.
29/06/14 Fred E
-1

I've given this a bit more thought over the last couple of days.

I do think that cars should have priority on the road except for fixed crossing places. I also accept that sometimes it is prudent for a cyclist to be on the pavement for their own safety. I guess we all need to try and get along and accept that occasionally the boundaries become blurred for good reason.
28/06/14 reclaim the pavements
-1

Samson - "Once you step onto the road then cycles, cars etc. have priority, not the pedestrian."

"watch out for pedestrians crossing a road into which you are turning. If they have started to cross they have priority, so give way"

This applies to cyclists as well as drivers of motor vehicles. It's a part of the HC that they all seem to forget the instant they pass their test, as you have... ( not that cyclists have to pass a test, more's the pity)
25/06/14 reclaim the pavements
1

Samson, You know very well that this Government, and certainly the next, will be looking for any way to raise money for the public purse. So you and your push biking fraternity will sooner or later be in the firing line to pay your way. Look at it this way, all good free things must eventually come to an end. And I'm quite sure you would all love to do your bit to help this country's finances in difficult times.
25/06/14 Anon
0

Problems that cyclists have with pedestrians and car drivers