I've just been interrupted in the middle of my work by yet another one of these people that turn up on your doorstep either selling stuff or getting home owners to fill in some sort of stupid survey questionnaire.  I wouldn't mind, but I don't even own this house and yet I still have to put up with all of the door to door salesmen and doorstep surveys!

I've just had another one and this time it was a young lady who wanted me fill in some sort of transport survey.  The fact that the come to pester you in the first case is bad enough, but she actually wanted to do this questionnaire there and then!  Anyway, I insisted that I was in the middle of work and that I didn't have time to spare.  She just wouldn't take no for an answer though and wouldn't leave until I took one of her forms and promised to fill it in; a promise I hasten to add that I will not keep.  I expect I'll be hiding behind the sofa on Friday when she comes back to pick it up. 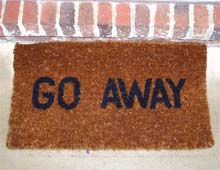 Cold callers - they wont take no for an answer...

It's so annoying and it seems to be happening quite frequently these days.  We had a couple of suits round a few days ago trying to sell us new doors and windows.  Then there were the Mormons a few weeks ago who called round to help us save our souls.  It's all just so irritating, especially when they wont take no for an answer and wont let you get a word in.

By the way, as I write this gripe I have just answered the door yet again so that's twice in ten minutes.  It was another young lady with a transport survey questionnaire.  Clearly they're not all singing from the same hymn sheet today!

Cold calling is banned in some countries but why not in the UK? It's bad enough having telephone calls but worse when sales people turn up on your doorstep uninvited.

Early today I had a rep from ADT Alarms at the door. He was very persistent in his sales talk, but I managed to politely get rid of him. If ever I need a new alarm system, I will not consider ADT Alarms if they have to gain customers by cold calling.
17/09/13 Nige
1

The young lady was asking for your help on a transport survey - she wasn't trying to sell you something. Perhaps her transport survey would improve transport provision in your area. Did you not stop to think of that? She's probably a government employee...so, by agreeing to fill in her survey and then hiding from her when she returns, you've just wasted that part of your taxes that pays her wages. Very clever.
07/02/11 bob
-9

We hardly answer the door to anybody now - we're just sick of aggressive sales people trying to tell us that we DO need what they're selling. Two dodgy looking men even tried to sell us new windows / guttering etc only two weeks after we'd had it all done. They must be brainless.
25/11/10 Weston Babe
10

I have two bull terriers. They are as docile as lambs but nobody knows that. If anyone comes to the gate the dogs are down there in a flash and I press the button to open the gate. End of story and we don't get pestered.
07/08/10 MikeP
-29

This happens to me on a few occasions - I never answer my door in the evenings because I just know it will be someone advertising (or selling) something! I mute my TV and what's most annoying, the odd one will knock persistently... even one shouted through my letterbox!! That hasn't happened since although if it does, I'll stick to the Ignore Callers After 8pm plan!!
07/08/10 Paul
1

There are two stickers on my front door that inform callers that we do not buy anything over the doorstep; but they still ignore these and call anyway. Another annoyance is religious groups who cold call, I am not prejudice about religion but I dislike people who preach their beliefs / faiths to me at the front door as I find I am losing the will to live and it can sometimes be an invasion of privacy when they start asking you questions about your beliefs, etc.
27/07/10 Dommy
3

Aggressive sales people, aggressive marketers, aggressive buskers and beggars...they should all be removed from our public places. And say "No" to tele-sales too.
12/07/10 Shisky
2

Today I was at the mall just walking around. This annoying guy blocked my way and asked me if I wanted to do his survey. I said "NO!", but he wouldn't take that as an answer, so I ran away. Five seconds later I ran into another annoying person doing the exact same thing.

This is a serious problem in malls, and the government needs to stand up and make this illegal. I hate it!
11/07/10 Bobby Powell
-1

EDF are indulging in some pretty disreputable and unprofessional cold calling techniques. By doing so they have guaranteed that neither I nor anyone within my sphere of influence will buy power from them. Interestingly they sell themselves on the basis of being 'cheap', which to me has more negative than positive connotations.
11/07/10 MikeP
32

The principle of door to door sales is at fault, not necessarily the people who do it. When we are at home we are removed from the market so to pursue us into our homes is a violation of the sanctity of the dwelling. Door to door sales people should realise that they will not encounter a welcome at every door, and steel themselves to the hostility that is certain to arise from time to time. Ideally, this method of sales would require an opt in agreement from householders.
11/07/10 anon
8

Does anybody ever consider the fact that door to door sales people are doing it to make a living, possibly supporting a family?? How would you like it if people were wanting you out of a job? I guess you wouldn't be very happy. Before you criticise these hard-working individuals, just remember that they are real people who need to earn money just like the rest of us. Most of them work on a commission only basis, and work long hours for little reward. I have great respect for them, it's not a job I could do.
11/07/10 A Realist
-1

If you can be bothered put up a little sign or note saying no door-to-door sales, they will most likely move on.

If you can't be bothered then when you open the door (if you do) and they start spewing some sort of pitch then simply tell them (interrupt them) they are wasting time with you as you don't want anything or w/e.

Either way they are working, they don't want to waste anyone's time least not theirs so they want sales, if they know you wont sell them anything they will move on. Just make it clear, they will probably genuinely thank you for telling them before they get into their pitch.
07/06/10 A Human Being
-1

Battleaxe - Why dont you get together with some of your neighbours and petition the council (whom you elected) to designate your area a 'No Cold Call' zone, theres loads down my way and its legally binding, perpetrators can end up with a criminal record.
10/05/10 Rider of the Apocalypse
-6

Our neighbourhood gets plagued with cold callers of all kinds, charities, double glazing, facias, energy firms, you name it. I got that fed-up with it a few years ago that I put up a notice on the front door stating very clearly that we do not under any circumstances do business of any kind with unsolicited callers. The religious groups always respect this and don't knock, but the firms and charities will persist. I got tired of saying, "Can't you read?", pointing to the notice and then getting attitude from some twit in a cheap suit. I have a clear view of anyone coming up the drive so nowadays if I don't recognise the person and I'm not expecting anyone, I don't bother answering the door - problem solved! It pleases me to know that they know I'm in and I'm ignoring them the way they think they can ignore my little notice!
10/05/10 Battleaxe
-26

Working from home can have it's share of problems

Can't afford to buy - priced out of housing market