Hi, my name is Andrew.  I have had a few strokes of bad luck one after another.  First of all, My work relocated me and did not properly fund the relocation costs.  They then went into administration.  This on it's own could be considered just normal bad luck but it didn't stop there.

After taking my car in for a service which cost £700 and included an oil change, the engine seized a week later.  A separate garage showed that melted plastic in the oil system had blocked the oil pump causing the engine to over heat and that the plastic had not come from the engine.  My insurance company investigated it and declared that the plastic could have been put in the engine by anyone; they would investigate further but at a hefty fee and may come to the same conclusion.  I was left having to buy a reconditioned engine at £2,500, for a car that I still owed £3,000 on.

This was just the start of the problems and it is true that people are particularly keen to kick you when you are down!  I am a young man with no family to help me if something takes a turn for the worst.  Like many people I am working hard just to get by so after this, what is fair and what is not I dont even know any more.

We HAVE several parties interested in buying your Audi ...

I am fighting £300 pounds in bank charges every month, which then leaves me £300 short for the next month.  The bank charges are up in court at the moment but in the meantime I have to simply drown in debt!  I also have contracts with the gym, broadband and various service providers that I can't cancel.  Why do they have to make that so difficult? 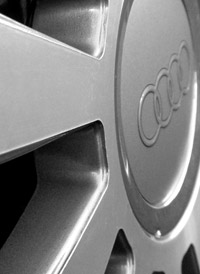 I have recently put an advert on Auto Trader to sell my car because I just cant keep it.  I have not had one call from a potential buyer but almost 30 calls from other companies claiming to have interested parties.  They are pretty good salesmen too and will tell you exactly what you need to hear.  Ashamed to say, I have subscribed to three of them and have still, after 2 months, not had one phone call from a REAL buyer.

The worst of them, and the one that inspired me to write this incidentally was a phone call from "Vehicle World Services" by a man called Alex (so tempted to write his full name).  He gave me the usual lines, "We HAVE several parties interested in buying your Audi."  He was asking for £130 and I knew that I may have just that much (maybe a couple of pounds short) in my account.  I told him that if I subscribe, I will be giving him my food money for the rest of month!!  With the month still having 15 days in it, Alex promised that either the same day or the next someone will come around to see my car.  They would offer me cash as he would have given the buyer finance.

My car is in great condition and going for a great price, so all I needed was someone to look at it and they'd snap it up.  I was going to pay bank charges anyway and as this guy was confident about taking the last of my money, I thought to myself this can't possibly be a scam.

What is a criminal exactly?  Is it someone who steels a loaf of bread and possibly uses a gun to do it, or is some telephone sales man that uses his words and lies?  The thing is, Alex probably prides himself on his sales skills.  Well Alex I've got news for you, you are worse than the man steeling with a gun and you are not alone.  There are many people out there willing to trick someone into handing over their money, or corporations (run by individuals) that will squeeze a bit extra out of people who can't afford it.

Sure I am one of the minorities that actually feels the punch and notices the degree of legal theft, but if you look at the sum of all this behaviour, it is the reason that people have no trust, which in turn is probably the root cause of all the problems in society.

Sorry Andrew, but just how naive are you? You work hard for your money so try holding on to it.
10/07/10 Swisstony
-2

I too paid a company that had interested parties in my car for sale... never heard from them again. Sound interested next time. try to get their address and post it here.

If something seems too good to be true, it probably is. Oh, and McSense is absolutely spot on... Refuse point blank to hand over money until a result has materialised.
11/02/09 A consumer
-8

hi
dont know what to say except Ifeel for you and hope that the new year will be much better. not all humans are low lifes. you just need to meet a good one. wishing you the very best
louise
08/12/08 louise2511
9

I purchased a car from a eBay member and got well ripped off and eBay don’t help when it comes to tracking the person down and are happy to allow someone to sell five cars a week and still claim to be a private seller and when they do give you the sellers details they only provide a partial address so you are on your own.

My trouble started with a Mr Garry Horton from Oldbury who is a very over weight gentleman with short graying ginger hair and tattoos and it turns out after a lot of effort on my part that other eBay members had been conned by this man and they had managed to have six of his eBay accounts closed down.

eBay could track his IP address or assist by providing partial details from the person credit card to enable people like me to get a bit of justice but they don’t so it must be assumed they are happy to assist the criminals to keep opening one account after another.
03/11/08 eBay Buyer
-11

I barked up the wrong tree, focusing on car dealerships - dealing in new and used cars. You were talking about selling your car. Either way, it was about people dealing in vehicles. They are a special breed of predators you'd want to associate with.. Too bad we need them like we need food and water.

Sorry, Andrew. I only added fuel to your misery and suspicion that you'd sooner forget. You won't as long as you opt to drive rather than to ride a bike. Good luck!
23/10/08 Sam, the Tiger
-27

I'm a newcomer and am in the process of enjoying the threads posted by the most vocal of consumers who've been had, up to their you know what. You sure were laid up in Job's bed without a comforter, or else your Karma needed to be cleansed and revamped; it'll make your future - maybe your next life - brighter. What more can one suggest, except one I know a bit about?

When you own an Audi, a Jag or its ilk, you're a target. When for the slightest thing you visit the agent, they'll hose you - yeah, take you to the cleaners. New or used car dealers are all alike. They love you as much as they love to purvey their wares and unload their cars on your lap. They also know you have to come back for more punishment.

Those of us who own run-of-the-mill vehicles like a Buick or a Chev instead of the foreign Mercedes or Peugot fare better. I take my car for an oil change and repair to some local garages. The car parts are universal and generally interchangeable, and no special tools and equipment are needed to do the job.

I remember owning a Honda a long time ago. Some yahoo ripped off a piece of rubber molding about five feet long. Replacing it cost $65.00 (this was a while ago). I can tell you more horror stories; but you have enough on your plate already.

And stay away from large or chain dealerships like a plague. They stop you from entering the bays with a warning: our insurance company prohibits customers from being in the shop while repairs are being conducted, something to that effect. A nice way of blaming the insurer and a polite way of working on your car engine behind your back. Your final tab will tell you how much tinkering and damage they've done to your car. Behind your back.

Caveat emptor is the word - you look after your own wallet, as no one else will, not even the Consumer Protection Bureau of the Department of Consumer and Corporate Affairs.
23/10/08 Sam, the Tiger
2

Andrew what Audi do you have?

I am a big Audi fan and can recommend you advertise the car on www.vwaudiforum.co.uk

This is the UK's biggest Volkswagen/Audi forum and you may well find someone interested in buying it from you.

PS- this isn't a scam