I am a postgraduate student who was recently involved in a study on the attitudes that people have towards single parents and other areas of the non-traditional family.  For example there is a general assumption that they are all jobless teenagers with a council house, when in fact these are probably only a minority.  The majority of single parents have in fact gone through a divorce or a long term relationship breakdown.

Male single parents are also never even considered to be part of this model of 'single parentdom'.  Single parent men, even though they are in the minority, do not feel that they are discriminated in the same way as their female counterparts.  They are often even seen as heroic.  Any person who raises a child on their own is surely as valid as another person of the opposite gender.

A lot of people questioned also state that single parents should NOT expect child maintenance once a relationship has ended.  Is it not the case that BOTH parents have responsibility to care for their child emotionally, practically AND financially as much as reasonably possible as long as a parent is fit to do so? 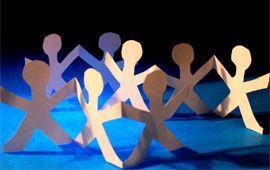 People who make discriminatory statements about race, religion, sexual orientation and indeed, single parents, tend to be uneducated, prejudiced and unable to cope with the notion that anyone who has a different life to their own or what they see as a 'traditional household' of a male and a female with children.  However, homosexual couples are now able to have children and they obviously have an absence of the opposite gender within their close family unit...

I wonder if the same people who make derogatory statements about single parents would have the same to say about other types of non traditional family?  Surely peoples' situation should be taken on an individual basis rather than people being lumped into a category and judged and vilified?  There will obviously be some single parents who are poor parents with a poor character, as there will also be married couples who have the same character faults.  Many people do not seem to be able to comprehend that it is a MINORITY character trait within a demographic and focus this disdain on the demographic as a whole.

Obviously this is not ALWAYS the case, however, while racism or sexism is quite rightly being eradicated, poor attitudes and discrimination against single parents appears to remain more acceptable in society?  Surely any type of snobbery towards any demographic of society is not helpful and will keep the demographic down?

I will find it very interesting to read any responses to this.

Single father's are not classed as heroic!!!!!!!
I have been a single father for a long time and I have had endless hassle from people, who do not agree with me being a single dad. I have been discriminated against and people do not hesitate to share their opinions!
30/11/17 Buster
-2

Dead and buried, this is not useful advice and is perhaps the worst thing 'Annoyed parent' can do.
At least she is working, you are advising her to grab more welfare handouts - I do not think this is the way forward for her in my humble opinion.
09/06/14 Work ethic
0

You are not pushing hard enough Annoyed parent. Keep on popping out sprogs one after another and you'll find life becomes easier and easier because your child benefit goes up and up again.
09/06/14 Dead and Buried
0

I'm a single parent. I'm 29 but look about 18/19 and get such obvious discrimination from people because they assume I'm a teen parent. It's so frustrating. By the way, I work full time and only receive the £20 weekly child benefit which is just like a drop in the ocean when it barely covers any costs.
09/06/14 Annoyed parent
1

I agree with some of this but seem to be a rare kind of single mum. I had my son at 41 and was with my then partner 5 years prior to his birth, I had a lot of trouble from his Indian family who were set against a mixed relationship. This forced me as I was under too much stress to split from him, I had done everything myself, I was working through pregnancy, became ill, and had to find a property to live in as well as claim benefits with no encouragment or support from my family and little from hm. I desparately wanted my son, and we lived a short period of happiness when he was born before his family intimidated me.
I have lived alone for 8 years out of 11 with my son, and have come to the conclusion that many people have Victorian attitudes to single parents, people want you but not the child, and I mean family, friends, and employers, even colleges Ive attended have no empathy, eg if you are late or absent due to the child. My own family have more or less disowned me. my brother has made derogatory comments re my care of my son, when he has never even visited my home. People use single parents it seems to vent their fury over a bad economy, etc. I would not have had my son knowing what I know now, I love him and will continue to do everything I can for him, but it shows me that humanity and society have a nasty ruthless side, I have not come across much compassion where I live.
26/12/12 velma7
-6

I know people talk about dependance on benefits, but without the benefits I currently get I could not afford to work. I work full time and a half with two jobs. and yes I am a single parent, and am a skilled individual. my benefits pretty much go on the child care i have to pay for to afford me to go to work. without these benefits I could not afford the childcare, as it would not be worth working. I worked through univesity as a single parent to enable me to better myself, provide for my child and contibute to society. so yes I do depend on the benefits but not so I can stay at home, although I would love to do that, having a young child, but so I can go to work. I have a mortgage, which was a shared mortgage with my ex partner. I carried it on. It is our home. i personally could not afford to work part time and most of the time I am exhausted from working about sisty hours a week to provide for my child. Does this still make me one of those parents (scum) as people put it dependant on benefits even though i pay as much tax as everyone else, if not more becasue I have two job?
29/08/11 singlparent and proud
-10

Personally I can’t stand over privileged , ignorant of the world , privately educated, bigoted, stupid teenage brats whose families employ illegal immigrants as servants and then exploit them.

I'm sorry if I disagree with you benefit claimants,but many of you are possibly council estate scum who do not deserve any benefits whatsoever. You can call me prejudiced,but just look at the case of the Chawners,the fat slobs who are the opposite of hard working citizens.
I also still stand by my mostly controversial views on benefit claimants and will not conform to any PC nonsense any posters may post on this gripe.
P:S:I know some benefit claimants are not council estate scum,I was referring to the ones who are scum.
28/04/11 DSG
-7

Chunky david cameron will never reduce my benefits because I will cause I riot if he even tries. My 9 kids and I have to live on benefits because I would not get the 1000 a week I get now. Life on benefits and being a single mum is fantastic. Going to work is a mugs game. Having kids has been the best thing ive ever done
25/04/11 Respect our government
-9

Yes I definatly see your point and I thankyou for the congrats. I do agree that there are a certian minority of women who do not deserve kids and it makes the rest of us look bad. Its this minority that will start to feel the pinch around about now when mr cameron is starting to cut benefits. Although I dont agree with all of his decisions, I do believe in his changes to the benefit system. These women will soon have theyre just deserts. The rest of us just have to be patiant in the process.
23/04/11 Chunky
-11

chunky, I agree with almost everything you have said in your post. However, I think you are wrong when you refer to 'all single parents'. Unlike yourself, there are single parents out there who have consciously chosen to have a child and raise it courtesy of State benefits, thereby initiating a cycle of welfare dependency, low aspirations and single parenthood. From what you have said, you should be proud of your achievements and I certainly have no hesitation in congratulating you. The gripes about child maintenance are not directed at single parents like yourself, but those have - and never have had - no intention of working hard to provide for their offspring. If there is discrimination, it should be in seeing the difference between these 2 'types' of single parents.
21/04/11 miserablemoaninggit
-2

im a single parent and very proud to be so! anybody who judges simply does not matter as facts speak for themselves. I work, and me and my 5 year old son have a comfortable lifestyle. we have a close bond as his dad abandoned him over a year ago now. im sad for my son but greatfull at the same time as now I know my son will be a better person than that irresponsible lowlife! being a single parent reaps so many benefits, not financially but emotionaly, and I can look my son in the eye and say im doing a damn good job! all these gripes about child maintanance do not phase me, my sons father works full time yet doesnt buy my son so much as a birthday card, he does anything possible to avoid the csa and so now I have forced myself to go without in order to give my boy the best, even if it means working long hours and not eating for a week! if and when daddy does cone back into his life it will be a bonus- not a need! to all single parents, dont see it as punishment, see it as privelage. you are gaining the love of your children in return for your hard work. that reward is priceless. ps sorry for rambling
10/04/11 chunky
-9

Late motherhood, but at what cost?