Some drivers really think that they can park their car wherever they please.without any regard for the fact that it is either illegal or even worse not a safe place to park in the first place.  I've seen cars parked on double yellows, double red, in bus stops, pedestrian crossings and of course outside someone's house in a residential area.  The later can actually be quite annoying and although it's not usually illegal there are quite often places for visitors to park just up the street, it's just that they can't be bothered to walk fifty steps down the road to the front door of whoever they have come to visit.

It's just another example of selfish and inconsiderate behaviour that has become very symbolic of the way people are and the way they treat others these days.  It's very sad, but it would appear that it's a case of every man and woman for themselves and damn the rest of you. 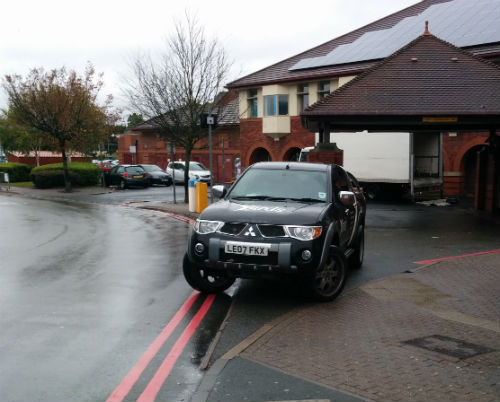 ... restricting the movement of pedestrians

I've also noticed that this display of selfish and irresponsible parking tends to be associated more with certain types of vehicles.  The delivery man in his white van for example will pull up wherever he pleases regardless of the fact that it's probably blocking an entrance or restricting the movement of pedestrians.

Then of course there are the ones with the big flash cars, the BMWs, or Audi or Mercedes etc.  To my mind these are the real culprits and they really do think that they can park where the hell they like without retribution. 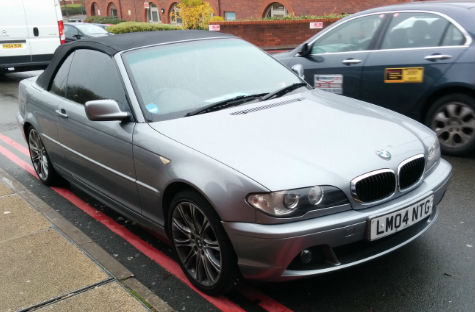 Look at the example photos I've posted with this gripe.  These were taken at a hospital and as you can imagine, selfish parking in a place such as this can not only be irritating but considering the fact that patients and ambulances etc. need to get around, it could be potentially hazardous as well - didn't really consider that did they?

So next time you're out in that BMW and looking for a parking space just think - is it legal, is it safe and iis the place where I'm about to park likely to inconvenience someone.

Don't forget that parking on the pavement necessitates driving upon it which is illegal, for good reasons (because it kills people). This does threaten pedestrians, it also damages the pavement, creating a trip hazard. I can't help but suspect this is one reason why so many idiots drive 4x4s, another reason is to bully other road users. It's obvious that most of these people never drive on soft surfaces because they have road tyres which are unsuitable. These 4x4 idiots generally only have poor to basic driving skills and that any offroad driving they do will be limited to pavements and supermarket car parks.

TopGear demonstrated conclusively that 4x4 vehicles are not needed on the school-run, or Public roads in the UK.
20/11/15 Freewheeler
1

Oh Godammit, yet another bloomin' pedestrian on the pavement where I want to park. Squashed him! How dare the Council allow these layabouts on the sidewalks where we want to park. Why don't they spend more money bevelling the kerbstones so that we in our cars can mount the pavements more easily. BAH!
12/11/15 Kerb Rage
0

Fed up with it

Nobody has the legal right to park a car on a road in the UK. Technically every car that is doing so is committing an offence regardless of location. How do you police it though? You simply can't!

There are simply too many cars on the road in the UK and the Victorian infrastructure cannot cope with it. New residential roads are even narrower than those built 100+ years ago. This is the result of trying to cram as many rabbit hutch houses into as small an area as possible. Off road parking is rarely a consideration for developers. I mean, why make a parking space when you can build another house there and sell it for much more money?

Local authorities should be insisting that new developments provide at least two off road parking spaces for each address and that houses have outside areas at least equivalent in size to the footprint of the house itself.

It's not their fault you don't have a 'big flash car'. As long as they are parked legally (even if outside someone's house) then there's nothing you can do about it.
09/11/15 You
-3

Ha, ha. Agree that people are incredibly selfish these days, and the worst kind are those that appear to be benevolent with good manners. Take my situation: I went into the post office to retrieve a package last week in Lewisham. I was third in the queue with two guys in front of me. The first of these two guys decided to take it upon himself, without conferring with anyone else, including me, to let in a perfectly fit, young able bodied woman with a pram - about 6th in the queue and behind me - with small sleeping baby within. She had no other kids, no heavy shopping. Nothing else at all. Not a worthy candidate for special consideration, I thought. Yet he took it upon himself to invite her to come in front of him, nonetheless. That was not the issue, he was entitled to believe she was worthy of special treatement just as I was entitled to think she was not. So what was the problem then? Him. Did he swap places with her, to take over her 6th position, leaving everyone else in their original place in the queue? No. He kept his place - in front of me still - and decided to take it upon himself to do everyone else's thinking for them too and decide for them - including me - that I would not mind being shunted back a space from third to fourth now. I did. I objected loudly and the guy just in front of me seemed to take his side, not mine, and then picked a fight with me and started abusing me verbally, trying to show me up as selfish, with no manners at all and trying to humiliate me by claiming I had 'issues'and 'needed to get a life.' The usual unthinker's claptrap. It is not that I was being selfish. Far from it. But they were. They were incredibly selfish and I was the one being abused. The woman with the baby was just as bad. She should have refused such an offer or at least done so after the argument started - not just go to the counter as if butter that wouldn't melt in her mouth with a lofty sense of entitlement to queue jump. Frankly the young haven't a clue how to behave, in my opinion, and good manners is not and is never about doing anyone else's thinking for them and assume that if you believe something is right, proper and fair everyone else will too. They won't. If you sacrifice your place in the queue, you do it alone - not force everyone else to as well whether they like it or not.
09/11/15 Grumpy xx
3