As we joined the M1 on 15th of August this year on our way down to Southend for a family get together we couldn't help but notice that the roads were really busy as they often are on a Saturday morning.  There was nothing special about the heavy traffic, that's pretty much the norm for weekend traffic on our overcrowded roads, but one thing that struck me in particular was that there were a lot more heavy goods vegicles, smaller lorries etc.  than we usually get.  But again this isn't anything to worry about normally as you sometimes get this at certain times of day, a bit like caffeine crazed four by four drivers at 3.30pm when it's time to pick the kids up.  You get used to the ebb and flow of traffic and all the forms it takes.

For those of you who haven't travelled on the M1 recently it's not a shining example of easy driving motorways in our fair country, quite the reverse in fact.  For as far back as I can remember in recent years there have been massive chunks of roadworks and 50mph zones that make a journey anywhere pretty tedious.  I often joke with my partner that this must be some sort of government job creation scheme because there's so much roadworks but nothing ever seems to get improved. 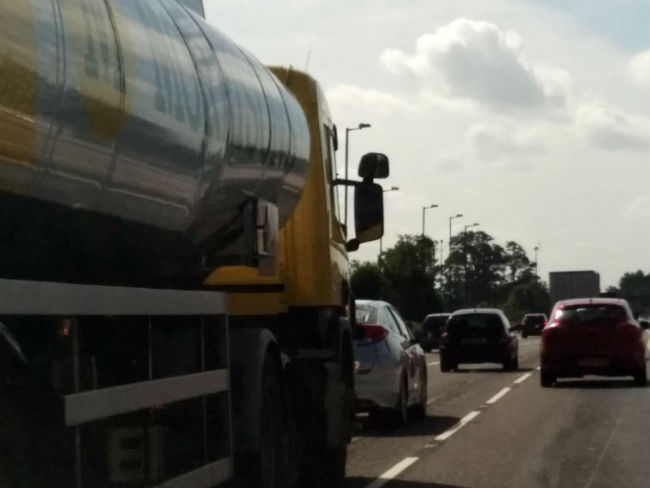 The point of my gripe, however, isn't the volume of traffic or the roadworks, it's about yet another selfish individual on the road who has no concern for the safety of others and considers his journey far more important than yours and will do whatever it takes to get where he is going.  I must point out that the use of "his" in that last remark could be construed as somewhat sexist, but considering the person was driving a large Morrisons petrol tanker I could perhaps be forgiven for making that assumption.

As mentioned earlier we were travelling southbound down the M1 in a section of roadworks at approximately 10.15am somewhere around junction 18 when we first encountered the Morrisons petrol lorry (number plate NA13 VMU).  We were in the middle lane sitting at around 50mph which was the speed limit and the Morrisons petrol tanker came up on the inside.  The speed of traffic in all three of the very narrow lanes was moving quite erratically as it does sometimes when it's busy.  The driver of the tanker just kept steaming up the inside was almost on top the lorry in front of him when he decided he wanted to pull out.  By this time we were already doing fifty and our lane had picked up again and had started moving ahead of the inside lane.  This wasn't good enough for the Morrisons driver though, he had a right to be in front of us apparently - even though we were already overtaking and he gave a good few blasts on the horn to let us know how important he was.  Well we carried on.  There was no where to go anyway without slamming on the brakes to "create" a gap for this idiot.  We ended up pulling into the inside lane at some point further down the M1 and watched in amazement as this guy again used his vehicle to intimidate someone else by driving right up their rear.

So my question is, do Morrisons check on the driving skills of the people they employ to drive around their petrol tankers?  What would happen if this idiot had caused an accident by driving so dangerously and generally being a complete arse?  I know not all HGV drivers are like this, but it's guys like this that give you a bad name.

Although driving a Morrison's lorry, there is every chance that the logistics are contracted out to a specialist firm, so the drivers will not work for Morrisons.
08/09/19 Timelord
-1

No good writing a blog here, Morrison's people have families, children and the same concerns as you and will reach the same conclusions, this person should not be driving a HGV let alone a petrol tanker, period.

So have you informed Morrison's of this encounter? I mean a written formal complaint with photographic evidence which you appear to have.

Make it clear to them that if any accidents involving petrol tankers occur in the area with injuries or fatalities, you will inform the press of the actions you took in informing Morrison's of this particular HGV driver so as to avoid a future accident happening.

Also ask for them to respond with the actions they have taken, and keep copies of everything.
06/11/15 Jon
1

The M1 is a dreadful motorway. It's so out of date, like many of the italian autostrade.

Drivers who tailgate should be banned forever. Italians should not be allowed to drive on our roads.
07/09/15 Non-Italian
3