Monday morning I come into work, switch the lights on and then flick the kettle on.  It's 8am usually when this happens, sometimes a little earlier depending on how the traffic was.  Officially the office opens at 8.30am, which is the time you expect people to turn up, switch the computer on and get on with their work.

I don't mind people putting the kettle on and having a coffee to wake themselves up (who doesn't), but if you turn up at 8.35am and then decide to make yourself some toast and a cup of tea, sit in front of your computer looking at Facebook for an hour or two before even thinking about doing what you're paid to do - then that's a completely different matter.  Oh, that's right - you've got a hangover haven't you?

These people must spend the whole weekend inebriated (or on something).  They then decide to come in to work with a hangover and probably aren't even remotely productive in their job until Tuesday afternoon (and that's on a good week!).  But that doesn't really annoy me.  As far as I'm concerned, they can carry on and be non-productive because its their life they are squandering at the end of the day.  If their way of living impinges on my life however, and they start to get personal about the way I live then that makes me very angry indeed.

I don't go out drinking all night till 4am, taking god knows what as recreational entertainment.  I don't drink until I drop and then end up in hospital with a stomach pump attached to me.  I'm 29, nearly 30 and whilst I may have done some silly things when I was 18, I certainly don't do that now. 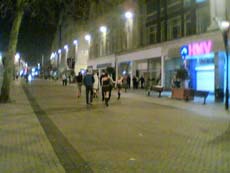 'HANG ON' you're probably thinking, 'You're nearly 30 and your moaning about some kids you work with?'  Well actually they're not kids, they're all somewhere between 25 and 35 so they ought to have grown out of that kind of behaviour by now.  To top it all off they all live at home and have no responsibility... AND they're all girls!

I went out for a staff do with these girls once and all the guys called it a night at 9pm (we started drinking at 7.30pm).  These girls drank 4 bottles of wine between 3 in less than an hour so you can only imagine what it was like.  We even got kicked out of the pub we where in because of the way they were behaving - and it wasn't exactly a classy joint either!  It was embarrassing and it was horrible, so the guys all made their excuses and went home.

The next day it was apparently 'funny' to be that drunk on a Tuesday night. The whole morning was spent with comments like 'aww. my hangover...' [insert high pitched girlie laugh].

Are my colleagues and I alone in having to put up with this kind of behaviour or are there others out there who endure this kind of thing?  I'm just curious to know and would also like to hear some comments from the girls that have this kind of lifestyle.

Collar has no idea why anyone would wish to put a thief into their mouths, in order to steal their brains away. Perhaps a life is so lacking in spirituality, that these pathetic people feel the need to bolster their self worth and self confidence with a poison that will erode their body and their mind. A few hours of artificial socialising and fun, for at least a day of utterly spirit-crushing wretchedness and physical pain and discomfort - not much of a pay-off is it?
and on top of the hangover, imagine having to go into work with a soulless prlck who smugly tells you they have no sympathy.
20/10/14 collar
0

far as i am concerned if you are going to go out for drinkes either do it when you know you don't have work the next day or control how much you drink so if you do have work the next day you don't have a hang over.
Where I use to work a collaeuge told me they had a hang over and I just blunty said you get no sympathy from me you knew you had work its your own fault.
Bugs me more when people spend the whole day moaning about it, get on with ya job instead of moaning next time book the day off
20/10/14 Mr H
0

My boyfriend is having a paricuarly bad hangover right now. Wont take my advice and go to bed so while im trying to get to sleep all im hearing is relentless star wars ! I get what your saying people enjoy drinks but have to endure the cosequences after but their nearest and dearest have to endure it too
11/08/13 charlotte
-3

Now that we live in a country which is effectively Winter all year round, I think the incidents of people going into work with a hangover will increase. My heart sinks when the nights start drawing-in again, and it can be very difficult to resist the urge to have a drink.

Either that, or go for a run in the cold and wet, under a grey sky, on grey treeless streets with boy-racers passing by in their little fiestas.

A drink seems the better option!

Hi.
loved reading bukowski's comments and i have to say ive known a few drinkers in my time at jobs who are as good if not better than others at their work.
Ive gone in hungover once or twice to one job i did for the simple reason i worked every day 7days a week for several months doing 2 different part-time jobs and had to be up early nearly every morning for one and if i didn't get out to the pub on a saturday night i'd never see most of my friends as they were all 9-5ers.
So yes, Sunday mornings were a struggle at times but screw it.
22/05/13 ahforfoulkessake
5

Hi Gainsborough lad and Kit,
Thank you for the compliments. Things are pretty rubbish personally at the moment so I think I should give all this business a rest for a while before posting any more whinges. As said, I think I've been a bit too militant and my language has been a bit 'loose' at times (I'm working on it). X
17/11/09 Bukowski
-28

Bukowski, you have a good way of putting your thoughts across, easy to understand and in laymans style,

You can't just leave the best site on the web just like that,

Need a laugh?, go on U tube and type in Hitlers downfall, (just harmless fun, before I get any negative feedback)
11/11/09 Gainsborough lad.
-1

Gainsborough lad, Kit and others
I've ranted enough on these pages so I'm packing it in. Best of to all you.
11/11/09 Bukowski
2

Gainsborough lad,
You are a thoroughly decent bloke and a lot of what you say I agree with but did you know that the 'units' thing was plucked out of the air and isn't based on any evidence? Gotta go to bed now. Night X
10/11/09 Bukowski
-2

We are not supposed to have no more than 21 alcohol units a week on health grounds according to the experts,

How come these 105 year old people when asked, what is the secret of old age? always reply "a tipple of spirits before bedtime"

Kit and Danny boy,
Thank you for hushing my giggles (I do need this from time to time). Kit, not sure about the wimple but hey, who knows? It may be a strong look for this season. Hungover@work, if I did offend you, I apologise unreservedly but I assure you what I posted is true though I will concede I should have been less militant about it (Iwas, unsurprisingly, a bit pissed at the time). Lotsa love.
09/11/09 Bukowski
1

I think from the "join a convent" jibe that it was directed at the o.p and not you. Unless you think a wimple would be a good look for you, sister Bukowski !!!!

It is another one of those anonymous "insults" from someone who can't come up with the words.
09/11/09 danny boy
5

People who don't know how to make tea properly