Google Street View has finally been released in the UK.  We've been waiting for this for ages having already enjoyed roaming the streets of other cities in Europe and the United States.  I'm not sure if Google Street View is actually of any use for anything, but it's certainly a lot of fun to play with.  Personally I have enjoyed taking a walk around the streets that I used to live on and visiting old haunts that quite frankly, it's too expensive to travel up and visit in person.

Some people just can't allow others to have a bit of fun and enjoy themselves without sticking their oar in and complaining about something.  In the news today, Google has removed dozens of photos from its new UK Street View service.  Of course Google has to comply with the wishes of the public and remove these offending images.  For example, a man walking into an adult shop, another being sick in public and someone else being arrested.  Yep, that's the typical British public for you, no wonder they don't want their mugshots in public view. 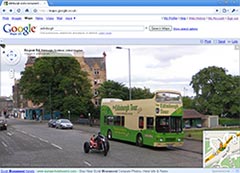 For all you know, you're already on a YouTube clip somewhere.

What a sad bunch of individuals, harping on about privacy concerns and spoiling it for the rest of us.  These people are the type of people that really get on my nerves.  For goodness sakes, they use face blurring technology and even if your coupon is visible on camera because the Google street van clocked you as it was driving passed, no body is really that interested anyway and if they are, they'll soon move on to the next 'innocent bystander'.  At the end of the day, any bozo with a mobile phone can walk down the street, take pictures and video footage and probably to far more sinister things with the footage and you wouldn't even know about it.  For all you know, you're already on a YouTube clip somewhere.

People go on about privacy way too much these days.  I don't think that it's a big concern unless you've got something to hide.  Privacy in your own home is one thing, that is and should be sacred, but privacy on the street?  It's a public place if you're there then expect people to see you and whatever you happen to be doing there.  I think that Google Street View is a good thing and the few miserable sods that whine and moan about their privacy should get a reality check.

I highly commend the "weekly gripe". You can log on and say what you want without having to disclose every single feasable piece of information about yourself. That is now something of a rarity on the internet nowadays.
17/08/13 Winston Smith
3

I have just tried to create a new e-mail address via google mail. I had to give up halfway through because I became so disgusted by the overwhelming amount of information they wanted to give to
them. It was nothing like this ten years ago when I first started using computers. It is not governments we need to worry about, it is nefarious and duplicitous organizations such as google and apple who are the new big brother.
17/08/13 Winston Smith
3

I love the image of the man being given some "customer service" in a street in broad daylight somewhere up north in Manchester I think (why am I not surprised). His face and his willy are pixellated!
18/05/13 Jan
-2

People worry far too much and should spend more time inventing simple solutions to such problems suh as googly data mining. Googly eyes are indeed watching but can only see and record what you decide to donate. Invent a second identity, use two or three different devices etc. Use your brain, I have several gmails, use hushmail and only ever do serious personal stuff on a dedicated laptop that yes is tied to me but doesnt contain anything dodgy.
02/05/12 frodo
-5

Any sensible terrorist group would not use maps and photos that are years out of date to plan an attack, they would clearly do their own recce and get up to date and accurate information.
As for the whingers who complained about their 'data' being stolen by googles vans, anyone using the internet on an unsecured wireless network is an idiot. I think I will take up a new hobby driving round collecting data, as it is easy to do but I didn't realise people were still radiating their unencrypted data all over the neighbourhood.
Thanks Google for letting me know.
29/04/11 artuk
-17

Just because yuo can find no use for it doesn't mean that it isn't anything more than a nosey-parkers heaven.
I find it extremely useful - I often have to go to places that are unfamiliar, and although I have no problems reading maps, a visual is SO much easier (maps don't show how many buildings etc)... and since I am travelling by bus it makes it wonderfully easy to work out which stop and to be able to recognise it when it does come up.
I LOVE streetview.
06/01/11 ladylouise62
-6

I tried google satelite and street view to try and find that house in Plymouth which had that huge Leylandii (now cut down) that was blocking the neighbouts light, but was unsuccessful.

In August, I bought a house, and found it extremely useful to have a street view of the immediate vicinity before I travelled the 150 miles to view it.
15/11/10 Biscuitbum
-4

Has anyone ever got a divorce because of a photo on Google Street View. Was the wrong car parked outside house? Was something visible through the window which/who should not have been there?
14/11/10 Private Dick
-4

DSG, get a grip ! IRA, Mafia and terrorists, criminals can be drive past in a van and take photos and videos of a place if they wanted to without Google. Anyone can drive past and look.

Google earth is a snapshot 3D map. Cover your house up so noone passing by can look.What have you got to hide?
13/11/10 jenna
7

If Google Street View is used by burglars,how long before it is used by terrorists(?) I mean,another 9/11 could be just around the corner(!) But let's face it,most terrorists are incapable of aiming planes at towers,let alone villages.
13/11/10 DSG
-9

ajp, you do understand that streetview only gives one snapshot of a moment in time; not constantly updated "snooping", don't you?
31/10/10 grumpyoldwoman
11

Why do you feel that your right to snoop and sneer at people is greater than their rights to privacy regardless of what they are doing (unless it is criminal)?

I wish we'd have had Street View in our day, those bloody A-Zs were a nightmare, the pages stick together with the blood you see.
12/04/10 Gerry Adams and Martin McGuinn
1

Well, I have had a good look at some of my old haunts, Skegness, Gt Yarmouth, but when did Blackpool have two south piers? (viewed from above)
11/03/10 Gainsborough lad.
-3

Frustrated, I didn't say in my post yesterday that I would be browsing other peoples property, (assuming you were answering my posting from yesterday)

I did say that I would be looking forward to some of the places that I have visited in the past,
Apologies if you were answering the main gripe.
11/03/10 Gainsborough lad.
-11