There's no incentive to run a small business or be self employed is there?  My monthly earnings are probably less than the national minimum wage and I quite often work longer hours than a great deal of people; 80 to 90 hours a week isn't unusual for me.  Although the time is spent at a computer and it's not physically demanding, it leaves very little time to get out and about and enjoy life.  I'm not complaining about the hours I work, because I really enjoy what I do and don't consider it work as such.  Besides, it was my choice to take this on and leave the security of a 9 to 5 so I've made my bed so to speak.

What I am complaining about is the lack of tax breaks for small businesses like mine that are struggling to survive.  You would think that the government would do everything they can to help the little man in the street with a view to reaping the benefits of more tax as the business grows. Apparently not though, because we're milked just as hard as the rest of the herd.

Believe me, the whole 10p tax thing is going to hit me very hard indeed.  I'm not one for dodging my tax and national insurance responsibilities but it does seem that have to pay rather a lot.  It's almost not worth trying to run a business at this level.  I'm sure I'd be okay if I was raking in more than 10 grand a year but I'm not.  I live very frugally and as my business is less than two years old I haven't been able to put much money aside for the tax man.  If I had, I'd have been in the red a long time ago with banks and credit card companies knocking on my door.  As it is, I'm sailing very close to the wind. 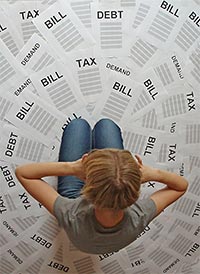 Having submitted my tax return this year (no, I don't cook the books - too honest), I've been landed a bill that I will struggle to pay.  In fact I will probably have to use a credit card to do it and I'm going to have to seek some extra employment to be able to pay that off.

The reason my tax bill is so high is because the class 4 National Insurance portion is much higher than expected.  I had calculated my tax and knew what to expect.  It was always going to be tough but I thought I could manage that, however I had no idea that the NI contributions were going to be as high (how do they calculate class 4 NI contributions anyway?).  Furthermore, the Inland Revenue wish to charge me an estimate (approximately the same again) for next year's tax bill.  How thoughtful of them.  Basically my tax bill is going to be 2 or 3 times what I earn on any given month.

What do I do?  Should I just jack the whole self employed thing in and claim benefits whilst looking for a nine to five?  I'm sure I'd be much better off, there again there's not much work around at the moment, especially as we're heading for (or in) a recession.  Workers are being laid off left right and centre.

I really do think that the personal allowance should be raised to something reasonable.  The current level is way too low and it doesn't really give self employed people at the very bottom much of a fighting chance.  As someone once said - at least Dick Turpin wore a mask before he robbed you!

I know exactly what you mean,I've been self employed four years now,and I'm wondering why I bothered setting up a proper business,I run a garage and specialise on Mercedes ,All I do now is pay high over heads including three lots of tax including vat business rates and hm robbing tax,if I do it again I will disappear of the tax radar,why pay all these high taxes and have f all when you retire,f--k you rip off Britain never again!!!!!!
15/01/14 100bollocks
0

Seems to me it's becoming more and more difficult to be self-employed with a business niche in any market. Most fields are saturated with people doing or trying the same thing. Being original these days is no good if you can't raise the finance, and borrowing can be a road to destruction anyway. I'd go for a co-operative.
13/06/13 Mr Rupert
-8

All businesses are like this. In the first few years you don't make any money or even make a loss. After that you start to make a profit and, ideally, you'll be able to just sit back in your chair and count your banknotes that are coming in everyday.
13/06/13 Nick
-11

One of the major problems of being self-employed, is ownership of assets, keep these to a minimum. the dream can be spoiled by worry. When the VAT man cometh, your accountant & your book keeper take the credit if things are OK, but take a hike if they are not. Have everything on HP & live in a council house.
28/01/11 Boblet
0

Dear gripe, so sorry things haven't changed in some thirty years. The dice have become steadily more and more loaded against the little people, and starting a business because you love what you do, has almost become a dream. Once, an entrepeneur could stand on a piece of land and say: "a great business will arise here", and not worry about the amount of work. Because that was what it took - honest work, and the taxman was happy. Now, we seem to be preying on each other - the banks on the businesses and people, the government on the banks and on the people. Stick at it, but find a second string, if you can. And I take my hat off to your dream and your courage. Highway Bob.
28/01/11 Highway Bob
8

As a self employed person fro the last 12 years it does feel like you are working for the inland revenue as yet another VAT bill becomes due. If it's not VAT that's due, it's income tax, or PAYE & NIC for your staff. In these difficult financial times, I look around my local town and wonder if it's worth it. Local businesses closing down at an alarming rate, an increase in £1 shops & charity shops, reduced margins.My job satisfaction has long gone.
28/10/09 dpm72
12

It sounds as if you have set up your business and done quite well at it. But you are right. The tax threshold should be raised to, say, £10,000. To pay tax under this level is ridiculous. But keep at it because once you are self-employed you definitely won't want a boss ever again. It's better to work twice the hours you would in a job to gain the satisfaction of knowing what you are capable of. In time I am sure, if you can keep overheads low, you will earn more and have a viable business and maybe you can sell it on one day.
25/04/09 Lorna
-7

I have been self employed, for the last 14 yrs and wouldn't have it any other way!
Like the man said though, is your business profitable enough to carry on with?
The worst thing you can do, is pay your bills with a credit card!
You may as well go bankrupt now and save yourself the grief, if you go down that road!!
10/04/09 NSI.
-6

To the original poster - I think you answered your own question.
11/02/09 An observer
1

Here's a bit of an update. Phoned the Inland Revenue and spoke to a nice chap who has set up 6 months worth of Direct Debits to help me spread the Tax payment out a bit. He was very sympathetic when I explained the situation. Only thing I need to do now is find the cash for the payments each month. Still, that should be easier than finding a lump sum. Lucked out on a job opportunity last week so that's blown that chance. It could be worse though, people are loosing their jobs left, right and centre. At least I still have an income.
31/01/09 M
-14

There is no such thing as being self employed. we just work for the government much harder and longer!
26/01/09 Anon
-1

Child maintenance is reduced while ex lives the life