Banks obviously still have way to much spare money if they can afford to send out as many unnecessary letters.  For example, I received one earlier today informing me that my overdraft had been set up and reminding me of all the usual charges should I be stupid enough to go over my planned overdraft limit.

This is all very well, but I had rung them up a week or so before to tell them I wanted to downgrade my account from a select to a classic and I know my overdraft is still the same because I spoke to them in order to do this.

They confirmed my identity with the usual security questions.  By the way, I did this to save myself around £8 a month.  No car so don't need the road cover and no expensive mobile phone so don't need the insurance for that.  There's no point in giving the bank money for something I won't use is there?

More to the point, they know that I know my overdraft is still the same because they refused to extend it.  This, I thought was nice since I had been with them for over twenty years and in all that time had only applied for an overdraft extension once or twice.  Well thanks for the help when I could really use it.  I know banks aren't a charity, but at the end of the day I'd always been a good customer and they've made plenty of money out of me in interest and charges over the years.  Perhaps this is the focus of another gripe though, however, I will certainly be taking my business elsewhere as soon as I possibly can! 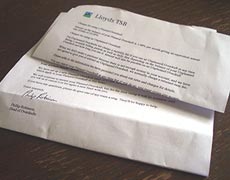 So back to my original point about the letters.  Why do they have to send out so many of them?  When I downgraded my account I received a letter informing me I had downgraded.  Fair enough I suppose.  On the other hand though, I did request this to happen.  But why send out a second letter about the overdraft limit which wasn't going to change?  There's also all the bank loan and credit card offers that they send me on a monthly basis, plus the letters that inform me how much they are charging me.  I elected some time ago to receive electronic statements.  I manage my account online and I have an email address (which they never use - fair enough as there's a lot of phishing going on).  But the point is that I'm quite capable of logging on and checking my account, or worse case scenario I could pick up a phone if I'm that curious to know how much they're going to sting me for this month!

By: Fed up with LLoyds TSB

As an update, I've since closed down the account with three debit cards. I've since received a total of NINE letters about it...I give up.
19/04/10 NickyB
14

Oh, and the best one ever was Barclaycard who kept sending blank cheques that 'I might care to use to pay tradesmen...'. Lovely - except that all my details were on them and I certainly hadn't asked for them and had to phone them three times to get them to stop! Again - so easy for someone to use for identify theft. In the meantime, we're expected to remember dozens of user names, pin numbers, phone passwords, online passwords, security questions, inside leg measurements, whatever....all in the name of security. What a joke!
21/11/09 NickyB
7

Yes, I worry about all my details on letters too. I've just changed to another bank and they've ended up sending me a total of ELEVEN letters about it. I got 3 debit cards and 3 letters giving me my PIN number. Why three? I only opened one account. What if someone had got hold of one of the letters? There was also a welcome letter, a letter about customer number, 3 letters about charges etc.etc. and this was on top of about 6 emails. I'm expecting a couple of carrier pigeons to turn up on the doorstep very soon....or perhaps an aeroplane writing my PIN number in the sky in coloured smoke.
21/11/09 NickyB
-5

I keep on getting unsolicited mail from banks as well.It would not bother me but inside they always print all of my details.What if it fell into the hands of an identity fraudster?
14/07/09 Mr Hicks
7

I suppose the banks send out too many numbers, symbols, words, sentences, paragraphs, etc as well as letters.

They are full of characters which also describes some of these warring bankers.
09/06/09 GoodWin Banker
-12

I can imagine the sales teams in the banks (poor employees), taught to bombard customers to either frighten them (employees ashamed and hoping to get another job) or hoping in new business. What business is that? What are they selling? They are selling "air".
30/04/09 SuperBambinoCattivo
8

Tell me about it, I paid off a loan early with lloyds two months ago and have had approx 8 letters (some that as far as I could see were the same) since detailing the closing of the loan in different ways. Sick of it.
24/04/09 Nick
-4

How about this for a waste of paper Abbey Business Banking sending out overdraft rates to our business which is in credit to the tune of six figures are they to embarrased at their interest rates. LMAO
23/04/09 Abbey stop making me laugh
-4

Fed up with LLoyds TSB

That's not exactly a paperless bank account is it, and my point exactly. Even when you do opt for electronic/online banking it never ends up paperless. Oh, and I received another letter today offering me a loan - WTF!! Just quit sending me letters, it's filling up my recycling bag!
20/04/09 Fed up with LLoyds TSB
-2

I opened a Green (paperless) account with hsbc a few months ago. For about the first month I was getting letters nearly every day!
20/04/09 Steve L
15

I totally agree with you, same bank and some of the same problems!
My conclusion is that like a lot of big organisations, different departments deal with different topics. And none of them communicate with each other!
Makes a mockery of having the electronic statements and online access "to save paper" then have to suffer this barrage of un needed additional information.
Maybe if they cut it out, they could reduce the ridiculous charges they levy!
19/04/09 NSI.
-2