There is no excuse for the rubbish on our streets these days and you see it all the time. From cigarette butt litter and food litter, to chewing gum and sweet wrappers.  Itâ€™s just disgusting.  What ever happened to keep Britain tidy?

Who do they think will clean up their rubbish?

When I was a kid, I was brought up to be responsible and dispose of rubbish properly and put it in a trash can or take it home.  But these days, parents it would seem just donâ€™t teach their children anything about clearing up after themselves.  It has become the norm to just chuck your rubbish down anywhere you like.  We live in a throw away society all right, quite literally.

So many times, I have walked down the street and seen some young lad or lass just drop their sweet wrapper wherever they please.  It makes me so angry, and who do they think will clean up their rubbish after them?  Is it the rubbish fairy?  Is it mum or dad?  No, itâ€™s you and me, because our taxes pay for the streets to be cleaned, and cleaning the street would be a whole lot easier if rubbish was placed in the bin at home or in a public litter bin. 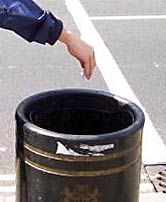 Sweetie papers blowing around our cities are one thing, but the worst type of trash dumped on our streets has got to be food packaging and cigarette butts.  The latter is just disgusting like the habit itself.  In my opinion, these people just need to be towed out to sea and drowned!

Casually discarded food packaging and in some cases the entire meal itself, thatâ€™s the real problem.  Every Saturday and Sunday morning you can guarantee youâ€™ll find a load of pizza cartons and stale kebab remnants all over the place left behind from the crowds out socialising the night before.  This kind of rubbish isnâ€™t just untidy, it is also a serious health hazard as well.  Food left on the streets encourages rats, flies cockroaches and all sorts of vermin.

One could argue that part of the reason that there is so much litter on our streets is down to the lack of bins provided.  Yes, to some degree I can go along with that. I know that I find the lack of bins on railway stations a real nuisance.  But there again, I think there is a good reason behind that.  Okay, so there arenâ€™t enough public places to deposit rubbish.  Itâ€™s quite straightforward really.  Just take yours home with you!

I hate my parents telling me to throw it onto the streets. You know what I do? I PUT IT IN A STREET BIN! im so responsible
07/04/21 Yonis
2

It just shows that communities are going down the drain. Nobody has a decent job and gangs and chavs are roaming the streets. Rubbish? That should be the least of your concerns.
11/11/13 Nick
-11

This country is going no wear with this people should be getting fined for what they are doing i love animals and nature im only 12 and this a joke to me im not a hippy but this going to far!!!
08/01/13 Ethan ;P
-4

I may not be able to take a bullet for this country, and in most instances probably wouldn't want to. However, I will risk being stabbed for this country telling people and insisting people pick up their litter when caught red-handed. Like rememberance day, there will be very few people left with the moral fibre and consideration that made this country what it was, a far cry from what it is today, a s@*thole. Something needs to be done, soon. Keep Britain Tidy, clearly most people are either illiterate or care even less about themselves. A big slap would cure it. Thing is about other countries like Italy, its not just their pride. People are happy to 'recommend' how other people should behave, otherwise you are shamed into submission. New generations disgust me. Why should I have to pick up after them. Time to leave, again!
17/11/11 Sinjin
-12

Now, they have also taken away the bins, so there is more litter strewn about.

I don't drink, but I don't see the point of taking away the bins, so that even non drinkers have nowhere to put their litter.
07/09/11 nickN
7

Litter? just another consequence of broken Britain.
Stop paying people to do nothing and start giving them the opportunity to pick up litter.
13/06/11 J man
-14

What about thermite? It's equally good when disposing of waste the council won't take away because it's "contaminated".
13/06/11 DSG
-29

I live in Plymouth Devon we are told not to put our bin bags out too early because of the chance of vermon and gulls getting into the bags and ripping them up so they supplied us with brown bags to put them in which is very good but when they come to collect them they send a chap to empty them on too the street and are left for up too 2/3 hours before the truck comes too pick them up but in the mean time the gulls the cats get into the bags and open them up and spred there contents onto the street then the big lorry comes and they pick up the bags but leave the other stuff on the ground and dont bother too pick it up, I bet you that the men who work for the Plymouth rubbish collection team dont have the mess outside there house.I might see a little street cleaning van come round about once a month to pick up the mess they should be ashamed of themselves I am sorry to say but I have lost all faith in the Plymouth Cleaning team and I think there is a lot of people who are in the same mind as myself
06/05/11 Jimmymac
-2

You carried it when it was full, had something in it or needed it in your pocket so even if there are no bins you should keep hold of it until you can dispose of it correctly. Many times I see litter just chucked down with a bin only a few feet away. Dropping litter just shows complete disrespect and lack of pride of where we live and for each other. I cannot wait to leave the UK as I do not have any pride in our country or the majority of people that live in it. The one good thing about global warming is that our small island may soon be under water and hopefully the litter dropping scum will sink with it.
27/01/11 James
-7

I think you can litter. Why should I bother to walk over to a bin I just throw my litter anywhere like on a bus in the streets out the window in a field anywhere I want I don't care. People get payied to pick it up
23/01/11 happy
-11

"as you are keen on correcting other people's English, I thought I should mention that "female" is an adjective not a noun."

That's rubbish!
MikeP has elided the term "female scumbags" to "females". You do this yourself if you are normal.
08/12/10 anon
-2

We can airlift and parachute you in any time you like Mike.

By the way, as you are keen on correcting other people's English, I thought I should mention that "female" is an adjective not a noun. A few commas would not go amiss either.