Smokers have rights too and I'm fed up with the way we are now seen as second class citizens.  As you may know, smoking in Scotland has now been banned.  We are all pushed outside with little facilities to shelter ourselves in.  Non-smokers claimed that they had nowhere to go to because if they went into a pub they would die several years later because of the inconsiderate people around them.

Come on, it's not like it's a surprise that people are going to be smoking there.  But this is not the worst part of it.  No, it's actually the government that I really want to have a gripe at.  For example forcing this ban on local businesses, I don't see as fair at all!

Who are they to interfere with how a person should run their own lives.  Why not offer incentives to become no smoking venues, grants for better ventilation.  I'm sure that the government could do this just by cutting down their spending in other areas. 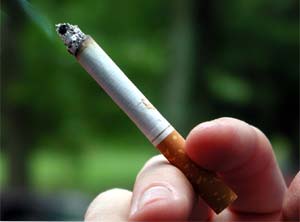 The adverts they place on the TV portray people who smoke as penniless, clumsy lepers to be avoided at all costs.  After all who would want to be around us smelly, grubby people?  I feel that us smokers are the easy targets, after all it's easier to get votes by banning smoking rather than preventing knife or drug related crimes.

For nonsmokers: I smoke and I like to smoke!

Well, for all the non smokers out there here's my conclusion.  I smoke and I like to smoke.  I also know that it causes cancer, I am not stupid.  Now we can live in a world where groups are segregated even more and we can all sit in pubs which smell of sweat, vomit and urine.  Ah, the great country that is Scotland.

Amazing how the smell of death eminates behind tobacco smokers in shops and public places. They leave a trail of stench that sticks to clean people. It should be made law that smokers had a bell atached to them so non smokers were aware of their presents.
22/03 Jethro
0

Amazing how the smell of death eminates behind tobacco smokers in shops and public places. They leave a trail of stench that sticks to clean people. It should be made law that smokers had a bell atached to them so non smokers were aware of their presents.
14/02/20 jethro
1

Just dying for that one last fag. Cornavirus loves you, so does undertakers. And that's not even to mention the American tobaco Co that needs you to keep their profits up.
14/02/20 Jethro
1

Cronavirus, it's in the UK. Good luck all you smokers with rotten lungs, don't say you were not warned about your smelly dirty addiction. Let's see how much you like it now.
08/02/20 guest
0

My wife, who has now just past her 69th birthday, and resolutely resisted my pleas to quit smoking cigarettes has been diagnosed with COPD. Her breathing has been getting worse for many years, and the coughing now is almost constant. She would say to me "but I enjoy smoking". Now I have to watch the agony of laboured breathing and pain. So, to all you educated cabbages that enjoy smoking and intend to continue, I'd stop your pension contributions, you may not need it if big C comes calling.
23/01/14 Just waiting
1

Boblet - Thank-you for taking the time to express your sentiment toward me. I value your opinion, however, I do find the irony within your post quite amusing;

I completely agree, you cannot educate a cabbage, but if I was a cabbage, then I must be an educated cabbage by virtue of the fact I'm using a computer.
08/06/12 Do people believe anything?
-3

I believe that you cannot educate a cabbage & you DPBA are a perfect example of such a vegetable you are posting absolute tripe. Yeh that sounds about right Tripe & Cabbage.
08/06/12 Boblet
-1

I will also add that smokers generate in excess of £14 billion in tax revenue, it costs a mere fraction of that (£2.9 billion) to treat them on the NHS. Hence the reason why the government and cancer research fabricated the information in the post below. The simple fact is that without smokers, taxes would have to rise considerably to make up the shortfall.
08/06/12 Do people believe anything?
10

Thanks ANON, for that valuable piece of complete nonsense.

Loss in economic output from deaths of smokers (£4.1 billion) ?

THE TRUE COST TO THE NATION OF SMOKING

It's time that the ban was extended to town centre areas, in the same way that many towns ban the drinking of alcohol within designated areas. I'm sick and tired of walking behind or near inconsiderate smokers and having to breathe-in the foulness of their ridiculous, obnoxious habit. Why is it that smokers think that cigarette ends are not litter?

The smoking in public places ban was one of the best things that Parliament has ever done. It is now time to extend this further - much further!
16/04/12 miserablemoaninggit
0

Yes it's your choice to smoke but why should we all die from passive smoking just because you can;t be bothered to move outside. Regardless of whether it's raining or snowing I don't think it's fair for people to smoke inside a public space you can smoke at home
14/04/12 .
2