Charities, groups, organisations, etc. exist all over the country to provide something for the community and most who take part do so for genuine reasons.  Unfortunately, you will always find someone somewhere who gets involved in order to dominate, take control and look better rather than to participate in the normal way.

These people often have a chip on their shoulder and progress by bullying and belittling others.  Let me tell you of a national organisation which has groups across the UK, and one group within the region where I live has an officer with a chip on her shoulder who suffers from a form of Small Person Syndrome. 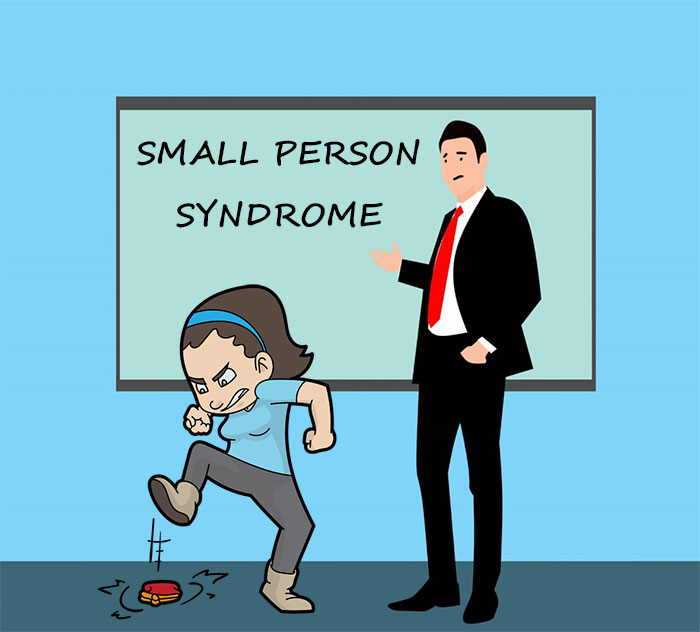 Ever since I first met this officer as a local representative (above group level) I saw how bossy and domineering she was, and members from other groups have also commented about her ways.  Since being promoted to a more regional level representative this officer has started taking the law into her own hands as well as dictating to other officers and members treating some like children.  She doesn't seem to understand some procedures, tries to undercut some processes, is rather disorganised, and is climbing the ranks by sucking up to the tea-set at national executive level.

There is nothing worse than an officer suffering from a "Small Person Syndrome" disorder who is standing on their pedestal trying to look bigger and better than everyone else when it is obvious that by taking the pedestal away and putting this officer on a level playing field she will be seen as smaller and inferior to the many she has belittled.

But then shit always rises to the top!  Many thanks for reading...

The charity Doctor Barbados was an imprtant charity founded by a good doctor, maybe it still is? However I would like to meet the twerp who decided that the good doctor's name was not giving his personal corporate image the right gloss, being boss of a charity did not have the right aura, so he dropped the doctor.
07/10/20 boblet42
0

Do you believe SIR Philip Green loses sleep over the people he has put on the dole.... nah, not a wink, he sleeps like a baby aboard his hundred million pound super yacht as he dreams of his next acquisition. LoL.
17/07/19 jethro
-5

With all this bad press SIR Philip Green recieves one has to wonder if there is a conspiracy of jealousy against this highly respected and successful businessman. So, he had to close a few of his loss making outlets to save the majority of his empire. If he had done nothing a great deal more of his employees would be on the dole. LoL.
13/07/19 Jethro
-7

Sir Philip Green has been sorely misgudged by his ex employees. His actions were for the best in saving what is left of the Acadia group (and his own wealth). I'm sure others have done the same, and others will do the same again. Little people in this world matter not, Money rules.
10/07/19 Jethro
-6

Sir Philip Green is not the type of MULTI MILLIONAIRE businessman that takes criticism lightly. If I were in his employment or have at this moment a pension with Acardia group, I would be concerned.
06/07/19 Jethro
-7

With all the bad news concerning Sir Philip Green's Arcadia group it would not surprise the markets to learn he has taken the decision to dump this mill stone from around his neck by selling the whole troubled empire. LoL.
02/07/19 Jethro
-7

I wonder how many gallons of fuel his 100 million pound super yacht does to the nautical mile. But no fear SIR Philip Green will not struggle now that he dosn't have all those loss making outlets. His bank balance must be loaded with pension money for his retirement. LoL.
30/06/19 Jethro
-7

It has apparently been suggested that Sir Philip Green privatley stated that Arcadia groups problems were part to blame with his employees coasting and an "ONLY THERE FOR THE BEER" attitude. Whether this is true or false, I know not, but it can be said that this is true for many failed businesses. One thing is for sure, he will not suffer, sailing away in his 100 million pound super yacht and big wallet.
23/06/19 Jethro
-6

Might be a wise move not to mention on your CV when looking for a new job that your last employer was Philip Green's Arcadia group. Arcadia stores are viewed the same as the BHS debacle, tired and outdated. No doubt we shall see further closures and job losses.
21/06/19 Jethro
-6

KARMA, now the arrogant bully faces his downfall. Decent people have been waiting for this to happen to him for ages. AND,can you believe,he's still a SIR. I wonder how many other SIR'S are just like him?
12/06/19 Jethro
-8

This gripe has some consistency with the way many politicians behave. Some try to put others down and have an element of narcissism in their approach. They are out for self gain and will knock others down - look at how Teresa May has been treated by egotistical colleagues who are supposed to support her.

Tony Blair is an ideal example of this and is now considered to be the worst prime minister the UK has ever had. He was also two-faced and a crawler. Perhaps I should also say he was a floater as he always floated on top of the Labour Party until he got flushed down the pan.

It’s a pity we have so many two-faced hypocrites and narrow-minded individuals who are negative with everything they disagree with and are out to destroy others for their obsession to come out on top. They are definitely smaller in some ways even if they are taller in height.
02/06/19 SupportBrexit
-12

What is happening to The Weekly Gripe? This is the worst gripe I've ever read. My gripe is get some better gripe stories! Oh and before someone says i have small person syndrome, I'm 6'1 tall.
31/05/19 Boring gripes
14

Horrible mums at the school gate