The introduction of 24 hour drinking in this country is a ridiculously daft idea.  It will only lead to more trouble and more violence on the streets.  With binge drinking running amok, some town centres will probably even become no-go areas at night.

The idea that this idea will lead to a continental style pavement cafe/bar culture where everyone sits around chatting quietly and peacefully, drinking beer or coffee or whatever through the evening and into the night is laughable.

I have experienced real thing in various cities in Europe.  It is wonderful to be able to stroll around on an evening among the various bars, cafes and not feel threatened or intimidated by a bunch of thick drunken lager louts. 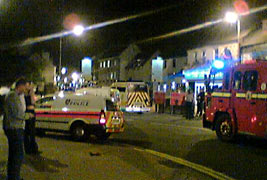 However, I am afraid the people of the UK are far too immature for this scenario. The British are (or at least a certain portion of them are), dare I say it, too brain dead to behave as civilised as that for more than a minute when there is alcohol around.  If they can't drink until they fall over in a pool of vomit then they don't want to know.

Changing the law to allow 24 hour drinking in my opinion, is something that won't work and we will pay dearly for in the long run.

I sometimes feel very ashamed to call myself British.  Well like it or not, 24 hour drinking is going to hit the streets, literally.

I would like to know what anyone else thinks about this.

If the bars are open 24 hour people won’t be in such a hurry to drink their fair share before it shuts.
Also if I’m working past midnight I want to go have a quiet drink, because people are so afraid of everything, I’m demoted to either going to a shit night club or drinking tins by the river.
24 hour pubs should be allowed if the company wants too.
03/11/20 Sam
1

It`s not 24 hour drinking that`s the problem, but the total inability of the british people to handle alcohol. We don`t know what sensible drinking is!
19/03/13 hairyfairy
7

Lawyer. Come on man, anglophobic comparisons of us as a nation, to a nation who's highlight of the day is the arrival of the breadman, is a bit shallow dont y know.
10/11/11 Boblet
13

The answer lies in pro-active policing, severe punishment of offenders, not just ASBOs and a £10 fine, and education of the younger people. The police should be allowed to give troublemakers a crack across the head. Drinking establishments need to be better controlled and 'Happy Hour' type offers banned or restricted, particularly 'all night Happy hours'

The "night economy" has been a total disaster for Britain, costing taxpayers untold £millions every year in policing, local authority cleaning up of street mess caused by late night drinkers, courts' time in dealing with offenders who turn out of pubs looking for trouble and disturbance to residents. The only sector that benefits is the private sector (brewers) who make the profits. Go to a French town and feel the calm at midnight. Everyone tucked up in bed in peace and quiet (not Paris, obviously!). So much better than here. Britain is the dustbin of Europe.
10/11/11 lawyer
-14

You cant blame pubs or the law for binge drinkers, you have to blame the people themselves with no self control over how much they drink! Pubs should have the right to stay open just like our supermarkets do- yet we dont blame asda and tesco for obesity do we?!
23/04/11 Chunks
9

Sunday for example has been turned into a riot in most town centres with all day drinking. In the old days when the pubs closed in the afternoon there was a cooling off period.Sunday night was at best a quiet quiz night. Nowadays there is a match on TV at 1.30 ,4.00 and then a karaoke into the night . Mayhem ensues . The politicians know this . But lets remember the extended hours where given on the grounds of 'nightshift workers can call in the pub after work'.
Ha ha ha
15/04/11 Curtly
-12

I think it's about time we as a nation curbed our drinking, and that includes me. I intend to cut down in the new year - I drink far too much!
19/12/10 Bagpuss
-2

Course its a good idea,its terrible that pubs close early,we don't want to go home early the speed and coke we are on is just too good to go home!It's not as if we can sleep anyway so may as well keep drinking!
06/07/10 joshrm
-30

Totally typical of the brain dead Labour Government to show the public they are doing something whether it be for the good or not.One day Blair wanted drunks marched to a cash point to pay on the spot fines,totally impossible to police but what changed his mind was not the obvious but a front page newspaper picture of his underage son on all fours drunk crawling across a street.His effort to change British culture overnight not only disrupted daily life in Britain,it spawned a new culture of unruly drunks taking up the valuable time of the police whom have far more pressing criminal issues to contend with.
24/05/10 simmo
11

this is just another unthoughtout piece of law from our discredited Govt,it always appears to me at least, that whichever party is in power they all want to be seen to be doing something,usually making at least one law a day,whether said law is needed or not.
Its a bit odd though that the Government that gave us 24 hours drinking then turns around and moans that yobs are getting drunk every day,Of course my real gripe is that I can't afford to,and if I could I'd buy myself a newer car!
19/05/10 Arrawn
8

Accept the change - how are we suppose to evolve if you people keep resisting change?! Of course there will be some short term impacts of changes like this but give it more time and you'll wonder what all the fuss was about.
It just annoys me that there are lots of people out there that complain and object to almost every change that gets proposed.
28/02/10 Steve
3

When Big Brewer said: "Give us back the freedom to flog cheap booze in Supermarkets and the world will be all fluffly bunnie-wunnies", the government listened.

Now Big Pharma are saying: "Give us back the freedom to flog cheap Heroin and Crack in supermarkets and the world will be all fluffy bunnie-wunnies" will the government listen?

This attempt to drag us all screaming back to pre-Dickensian times in the name of high profits for multi national corporations and higher tax bills for the rest of us who have to deal with the social consequences needs to be opposed more vigourously.

When Sweden sought to control the alcohol problems they were having through imposing a minimum price on products, Big Brewer issued a state whining about how this was empowering criminal gangs. The Government stood their ground and imposed them anyway.

We must not give these corporate expansionists any more gorund. 24 hour drinking should be repealed and a minimum price should be affixed. Let the b----ds squirm and protest, after all they have thousands of pounds worth of self awarded bonuses to fall back on.
10/01/10 Alan Page
1