I was in charge of transport and national distribution of the MMR and HIB vaccine, six to twelve months prior to bad reports about the jabs hitting the tabloids.

I cannot name the company, but will quite happily slander the NHS for ignoring all my warnings and post reports, even after I left.  As with all drugs and vaccines, there will always be a small percentage of people who will show negative side effects, we are after all different genetically.

There was nothing wrong with these vaccines initially (FROM THE PRODUCTION LINE).  The problem was on our side. The company I worked for installed a new computer system, and shut down the old one, rather than run the two together in parallel to iron out any problems.  This wasn’t a particularly good idea. 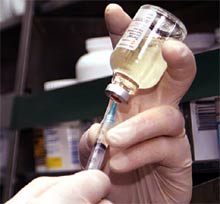 It basically resulted in mass delays of vaccine distribution to the clinics and surgeries, and most importantly the jabs were going out in NON REFRIDGERATED VANS to get rid of the backlog.

Please note these jabs HAVE to be in an environment where the temperature is strictly controlled, otherwise these live vials are death traps.  Still, this company insisted that we send out the jabs in very warm vans.  I was not happy with this situation at all.

Have you or any of your kids been affected?  What do you make of this?

Erm. what particular vaccine are we talking about here? I've heard of scary practices by the NHS but this borders on ridiculous.
03/07/09 AngelCake
-7

"I was in charge of transport and national distribution of the MMR and HIB vaccine" - whoa there fella. If you were in charge of the transportation, surely you are in a position to do something about it?
04/09/07 Mooch
-16

Were these multi dose MMR vials? If they were they most likely contained a mercury-based preservative which would at least have controlled any unwanted bacterial / fungal contaminants, although I'm not sure how safe the attenuated viruses themselves would have been under such conditions. I don't recall much info about the HIB jabs, which were fairly new then, weren't they?

I have treated kids who have damage from vaccination. I think it's shocking what is happening. The AVN has a reporting line for vaccination damage. Parents should ALWAYS report vaccine reactions, however large or small. DOctors won't do it for them, they always cover it up. Same with drug companies so ring this number immediately to report a vaccine reaction. Phone 1800 007 468 in Australia also check their website www.avn.org.au. They also put out a magazine called Informed Voice that is really good.
09/02/06 Em
-12