How characteristic the paradox of the thought can be - that if a thought process is separated from a seemingly literate person in whom it resides, it can itself become an idea bordering on a contradiction in terms and in fact.

By this, the oldsters belonging in previous generations who think that the calculator ushers in today's generation of math-dumb youngsters who cannot manually do simple arithmetic may be guilty of self-contradiction.  The reason given always seems to be as straight-laced as it is boringly repetitious: they have not learned by rote the multiplication tables.  They cannot multiply 15 by 9.  But they are smart enough, though, to work as a supermart checkout cashier.

Sure, those in the sixties and older have acquired some skills in addition, subtracton, division and multiplication reasonably well; others of the generation do perform ratios, radicals and exponents - to cite these few vital math operations.  But, is that IT?

With my calculator having all the built-in facility of mathematical notations, I recently set out to prove a point.  Hypothetically, what would I add to my investment account in 3 years at 3% compounded annually if I locked in $9000 in a guaranteed investment certificate as opposed to leaving it in a “power” savings account at 1.35% compounded daily for the same period?

I was deadly curious, since the bank at every turn comes up with newfangled menus of investment and savings intruments; recommending vaguely exotic dishes for our soft, unsuspecting palate.

But it was at this point that my most berated gizmo came in handy.  Why then would any fool sweat his pants off when the donkey work of calculating manually can be undertaken by a donk with a calculator?  Or, he could google for an idiot-proof array of selectable calculators to determine the true cost of borrowing, or future and present values due to accrued earnings.  No sweat. 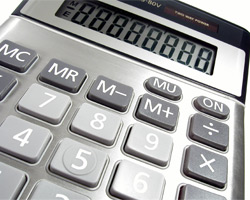 I also deliberated over determining the height of a wall panel requiring paint job.  My painter knew his math alright – how to multiply, so forth, in his head and when to sleight me with the magic of percentages.  But had he been aware, he might have assessed with his long ladder of predetermined length the height of the wall, to work out the wall area slated for a fresh coat of paint.  All by initially applying his sharp knowledge for numbers to perfunctorily help himself with available pythagorean theorem calculators.  He climbed instead to measure.

Lean the ladder against the fascia board for support, and he'll have a right angle triangle.  If the length of the hypotenuse-ladder squared (L^2) is equal to the sum of the squares of the wall height (W^2) plus the distance from the base of the ladder to that of the wall (B^2), then wall height = the square root of (L^2 minus B^2).  Let the donkey carry on from here, or punch in your numbers: height of wall equals the square root of (17.5^2 minus 7.25^2).

There is no rocket science involved here to confound, just simple mathematical analogies.  Likened to a computer, a $9.00 dedicated electronic contraption simplifies tedious work to free us from the constraints of time to THINK.  Understanding, for instance, the concept wrapped in 2 times 8 means that there are 8 twos added in series to produce 16, that sort of analogous thinking might just carry us through the day.

Very few memorize the innumerable scientific and mathematical formulae any more for its own sake; but they know what they mean, where to find them and how and when to apply them.  So don't assign blames for our children's deficiency in mathematics.  If rote learning has its proper place in learning, so does the calculator have its complementary function, and so indispensable.

By: Sam, the Tiger

Man, did I shoot myself in the foot - I posted it and then castigated? Sorry - maybe I was still in the state of slumber. It was a long time ago.

Ph.D. stuff - plagiarized verbatim from my previous posting elsewhere? Right? It's a no brainer - high school math which can be proved either with traditional linear geometry or analytical in the early days using mostly trigs.

So much emphasis on Math, so little emphasis on the fluidity, clarity and beauty of the English language. Too many gripes on here are so lacking to the point of tedium.
05/02/11 yeah
-10

I remember when I was about 12 working out how many miles there are in a light year by long multiplication. (No calculators then!)
05/02/11 grumpyoldwoman
-8

Zowie, we are getting somewhere! Beats me; beyond me. Know what, if only more of us would resort to the unostentacious gizmo, car dealers would not be taking us for a ride that easily. I'm sure we all resent being taken for a fool.

I discovered the following through the use of pocket calculator

Mass of Proton/Mass of Electron = 6*pi^5

GOW (gracioso online woman), thanks for acknowledging my humble rubber stamp virtual presence. And nice of you to bring everyone up to speed with the red school house's proven pedagogy.

As for G-xx, you sure broke the back of the monotonous culprit of the lumbering numbers with his comic relief (we need it), a jeu de mots. Seriously, if you are not being facetious about failing math, anyone who did not cut it can blame his teacher(s). I mean it.

Teachers especially in your formative years can either make or break you. Once you hate Math or Literature or Science, that's it. You're done for. We've all had teachers who should not be in the profession of educating kids.

Enough said. Just a reinforcer, I am ALL for learning by rote. I did and many did. But modern educational 'gadgets' dovetail with it to make one's education complete. Their co-dependency can never be overestimated.
04/02/11 Sam, the Tiger
4

I thought 'multiply' had something to do with getting pregnant, not knowing your times tables. Just as I thought 'take away' was to do with Chinese or Indian food, and Pi was something you stuck in the oven for supper.

Lunch hour, but both of you are right, and so was 1angel1 - and GOW's farewell paragraphed wrapped up the entire point of the exercise. I remarked about the brain and the computer work hand in glove.

One cannot do mathematics without the assistance of slide rules, log and anti-log tables, trig tables, so forth which are all incorporated into the algorithms enclosed within the silicon chips.

I'm all for rote learning that has the effect of honing the circuitry of the brain. But calculators and their ilk serve a complementary function. One complements the other.

I'll be most surprised if we can do with one without the other. But to suggest that the calculator makes today's kids math-dumb is what we should be focussing on.

Thanks, folks, for your input that I certainly do not disagree. As for dumbing down many people, it's because they don't exercise their brain-muscles at all and allow them to atrophy: thinking and solving problems are excruciatingly painful for some.
03/02/11 Sam, the Tiger
-5

The constant use of calculators and computers has dumbed down many people. I had the sad experience, long ago before it got so bad, of going into a post office to buy 10 x 40p. stamps. The woman took them out of the book, put them aside, I pushed a £5 note across and was waiting for the stamps and the £1 change. She's scrabbling around on her desk, looking for something, until I said : "Can I just have my stamps and change please."

Then there was a particularly dumb blonde friend of mine who was going for an internal interview for a promotion in the bank she worked. They gave her a sheet of simple questions as examples of what she might be asked on interview.

Sam, I knew you were the author of this gripe when I was halfway through the first paragraph! (Which now seems to have disappeared behind an advert.)

Anyway, I can see your point completely. When I was at school we had slide rules instead of calculators, but the comparison is the same. We learnt our times tables at primary school (up to age 11) and had mental arithmetic tests regularly.

At grammar school we carried on learning a good basis in maths, but also had things to work out which might involve multiplying 7.3286 by 19.54238 or somesuch; once you have proved that you know how to do it "by yourself" there is very little point in wasting the time when a slide rule or calculator will give you an instant answer. We were sometimes though asked to show a guesstimate on paper to prove that we had some idea of what the answer should be!

However I can see the other point of view too! As 1angel1 says, mental arithmetic is sadly lacking today in what seems to be the majority of the population. I had a similar situation in a shop once; I was buying something for £11 and gave the cashier a twenty pound note and a one pound coin. There was some confusion with entering this into the till and so she couldn't work out how much change she had to give me.

This situation is what leads to things like hospital patients getting 10x overdoses of drugs with sometimes fatal results; a decimal point getting put in the wrong place by accident when doing a calculation based on bodyweight of the patient, and nobody noticing or questioning because they don't have any idea where it really should be.

Calculators are fine as long as they are not allowed to take the place of learning basic maths to start with.
03/02/11 grumpyoldwoman
-13

I am with you all the way, but the brain and the calculator work hand in glove. We learn the fundamental rules of grammar and writing, and no matter how adept we are, we still in today's world require the dedicated desktop or laptop to help us organize our work effectively.

We cannot dispense with the basic knowledge consistent with good writing and sound math without understanding how the indispensable rules governing them work in the first place.

1angel1's argument is PRECISELY the kind I refer to in my gripe - she has to realize the checkout register was invented to to all the adding, subtracting, discounting (for specials) and showing the final tally - and the correct change due to her.

How long do you think it'd take the cashier to use her head to do the "donkey work" I alluded to? With twenty customers ahead of you, you'll never get out of the store alive.

By the same token, no astronauts would ever get to their space stations and return alive. None. Man do the THINKING, machines do the DONKEY WORK.
03/02/11 Sam, the Tiger
-6

I think children should have to do maths using their brain rather than letting a machine do it for them. I went into a shop recently and the cashier's machine had a malfunction. She owed me 12p change but said she couldn't work it out without a calculator and obviously wasn't going to take my word for it. I think it is appalling that people these days can't work these simple sums in their head. There is an old saying "use it or lose it" and I do believe this to be true. You need to use your brain or it becomes lazy.
03/02/11 1angel1
-11

Dyslexia in a topsy turvy world