Today as I searched various online shops to buy a new graphics card I was reminded of something that I find a little irritating - the vast number of 3 and 4 letter acronyms used in technology these days.  Before I go on I should point out that I'm not one of the confused generation.  I'm perfectly capable of finding out what any particular acronym or abbreviation stands for.  I just wish they'd use a few less of them.

This is a minor thing I know, but perhaps it's something that people can relate to.  There's a new abbreviation or acronym out practically every week now and as the number of gadgets in the home grows, so too does the number of obscure acronyms.  Whilst I can appreciate that things need a name, can't they think up something original?  Instead of coming up with a creative name more often than not they list all the attributes and feature, chop off the first letter of each word and end up with something completely meaningless.

Nothing can be done about it this though because the technology gurus out there love them.  Here's a kind of noddy guide to some of the acronyms you might come across if you're going shopping, particularly if you're looking for a new graphics card.  Perhaps a bit basic for the more tech savvy, but it might help someone out and by all means add yours to the list! 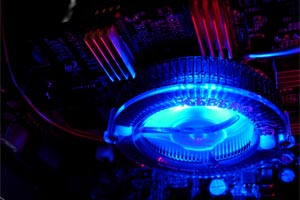 AGP - Advanced (accelerated) Graphics Port - the old style slot in a computer where your graphics card would go.  Graphics cards are sometimes called video cards by the way - just to confuse matters!

DDR - A term often used when talking about computer memory. It means Double Data Rate and more often than not you'll find a number after it such as DDR2 or DDR3.  Well at least they're sticking with the same acronym instead of coming up with a new one.  You might also see RAM (Random Access Memory) Graphics cards typically use memory to store textures and model data.  Put quite simply textures are the images the that get draped over a 3D model to make it look real and a model consists of a series of points in 3 dimensional space.  Typically these models are made from triangles.  Try to remember this the next time you swing your sword in World of Warcraft!

DLP - This one tends to be found associated with projectors. It stands for Digital Light Processing and is basically a semiconductor chip with an array of microscopic mirrors which are used to construct the final image.  In a nutshell, the bright light from the projector bulb shines through a fast rotating colour wheel (basically a disk with the primary colours on it), this coloured light is then routed through various optics and hits the DLP chip and the tiny mirrors when combined with the various colours over a fraction of a second will determine the final colour of the pixel on screen.

DVI - Chances are you're probably using one just now.  Many LCD displays and projectors will use the Digital Visual Interface or DVI type connectors.  Basically 3 rows of 8 pins and a group of 4 pins at one end.  It's also possible that some pins are missing depending on whether or not you have a DVI-I, DVI-A or DVI-D connector.  DVI is designed to carry both an analogue and digital video signal.

HD - In short, high definition.  You'll see these two letters strapped to any number of acronyms.  Learn them well!

HDCP - Something you may see from time to time and it stands for High-bandwidth Digital Content Protection.  It's basically a system to prevent the copying of digital video and audio.  Like any copy protection system it has weaknesses and these have been exploited.

HDMI - Is the new(ish) kid on the block and stands for High Definition Multimedia Interface.  If you're into the latest HD audio visual equipment you'll be using HDMI connectors.  There are several different subtypes with various capabilities.  Unlike DVI both the audio and video information is carried in a purely digital format.

HDTV - High Definition Television - does what it says on the tin.  Lots and lots of coloured dots on the same surface area of your telly.  Probably need a much bigger magnifying glass to see the little red green and blue bars.

LCD - nothing to do with that substance from the hippy erra, that's L.S.D. and if you've had some of that, chances are you're probably not interested in this...  LCD stands for Liquid Crystal Display.  Think flat screens on computers and laptops and you'll be in touch with an LCD.

PCIe - Stands for PCI Express and is at the time of writing the current hole to stick you're graphics card in.  There's a further world of confusion here when they start talking about PCIe 2.0 and PCIe 1.0 and then x16.  Probably best not to worry about this though for the moment.  By the way, PCI stands for peripheral component interconnect, bet you wish you hadn't asked now!  So why couldn't it just be called upgrade slot type 2 or something?

VGA - Video Graphics Array is a term still found when discussion graphics cards and displays.  It was developed in the 80's and was the original standard for computer displays.  The term VGA adapter refers to the socket found on the back of older graphics cards and PC's that is sometimes coloured blue.

Instead of coming up with a creative name more often than not they list all the attributes and feature, chop off the first letter of each word and end up with something completely meaningless. Antioch Roofing Pros
26/11 Chresna
0

My computer always has trouble. More and more errors every day. I always need to update my computer's camera driver, particpate in the HP Help and Support Improvement Program, download Essential Updates for Windows Vista, and setup InterVideo WinDVD 8 player for my computer.

I just got office 2003 for my new computer which is the one now that I am talking about, I had to download: Microsoft PowerPoint Presentation, Microsoft Word Document, Microsoft Excel Worksheet, Microsoft Picture manager and all the other Office 2003 tools.

That is also a hate of mine. It would appear why there is a language barrier between youths and adults. Yes, I know this is about technology, but it's in a close area.
30/09/09 hmmmm
-8

Electronic Stability Programme. My Corsa has ESP+ which was my saviour a few times during the bad icy weather we had earlier in the year, especially as we live at the top of a steep hill.

And if you're a pilot or in the aircraft industry there's a whole load of them to know there as well. IFR, ILS, NTSB, TCAS, VOR etc etc
22/09/09 Youthful Griper
2

There is an profusion of TLAs (Three Letter Acronyms) in most industries, I suspect partly to ensure sales of "What PC" (or whatever) magazine, who usually have columns to "explain jargon".

Those of us old enough to have lived through the Apollo moon landings were virtually brought up on them, think LEM (Lunar Excursion Module), EVA (Extra-Vehicular Activity), etc., etc.

I think it frustrating that car manufacturers are starting to get into the TLA world, though why my car needs "ESP" is beyond me...
22/09/09 Timelord
-18

An early example of this confusion was the woofers and tweeters sketch in the not the nine o'clock news, smith and jones show of the early eightys, quite funny at the time, but probably the norm today.
21/09/09 Gainsborough lad.
15