Here's an motor insurance nightmare story for you, and I can tell you I'm more than a little bit peeved.  My twenty-year-old son had his Scooter stolen last December, his pride and joy that he had owned for three years.  It was stolen from where it was parked, in a quiet col-de-sac just outside his girlfriend's house.

Although the Scooter was chained to a wrought iron gate, had a front wheel 'disc lock' and the steering lock was in operation; the thieves still managed to steal it without much trouble apparently.

We reported the theft to the police as soon as we discovered it, and we were very surprised when they rang back a couple of hours later.  They informed us that they had apprehended the thieves and located the vehicle.  By this time the scooter had a puncture and could not be ridden anywhere, so the Police arranged for it to be 'recovered' by a commercial organisation.  This was handled by the insurer as our broker was disinclined to get involved.

The Insurance company then left it in storage for two and half months before an engineer could take a look at it and assess the damage.  He immediately declared it a write off which was of course ridiculous, but not nearly as ridiculous as the cash offer we received once the excess had been deducted. 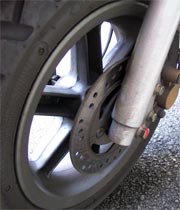 My son loved his scooter and looked after it well.  It had a very low mileage, was serviced regularly and repaired whenever it needed to be.  To earn a living he worked in a bakery, and “worked” being the operative word here, because without the use of his own transport he could no longer make those early morning starts that bakers are required to do.

During the course of handling our claim, the insurance company never wrote one single letter and only once returned a phone call until the final offer was made.  We had to chase THEM all the time, usually by phone.  When we called them, we would quite often be kept waiting.  Once we waited for over an hour for a claims handler to become available.  The brokers of course, were absolutely no help whatsoever and steadfastly refused to be involved!

So, now my son has, no vehicle, no job, and a distinct feeling that dealing with the insurance company was far more traumatic than actually having the scooter stolen.

In summary, vehicle theft and recovery: 2 hours, handling the insurance claim: 11 weeks and running.  When the Police originally called us back they said, “don't worry”.  I think they should have said the exact opposite!

my son was pulled by police doing a routine check ,on his scooter .Then said they had a warrent fo arrest ,after spending night locked up and taking to court the next day to find out that the warrent was for a 2.25 train ticket charge to discover was not him on the id photo discripsion judge through it out of court when he went to vcollect scooter it had been stolen , police said they would keep checks on scooter wile in custordy but failed as would of reported scooter stolen now insurance company want to offer 2500 pay out when valve 1000
20/06/19 sharon
0

Tell them to get stuffed. You haven't cancelled the policy. Provided you continue to pay any outstanding installments (if you purchased in this way) then they cannot charge you. Also, if you paid up front then the policy will just naturally expire after one year. In neither of these circumstances have you cancelled.
If they claim it is now because you don't have a motorcycle then the policy will be deemed to be 'frustrated'. You are not liable for any additional payment in this respect either.
What they are doing is, in my opinion, illegal. Tell them so and refuse to pay anything extra.
25/02/14 Samson (Delilah's too busy to post)
0

Swinton Motorbike Insurance struck again. I paid a little over £60 upfront for fully comprehensive insurance for my bike. Unfortunately I had an accident (no one else involved) and the bike was written off. I dealt directly with Chaucer Insurance who were very helpful and a settlement figure was agreed and paid. I was then contacted by Swinton who informed me that unless I insured another bike with them within 2 weeks I would be lible a policy cancellation fee of almost £70. Just disgusting.
24/02/14 Annoyed, Sudbury
1

Simon I can you please get in touch and guide me through the steps I should take to get a settlement then I could let the gap do the rest. My email is aaulad@yahoo.com
11/10/13 Audi
-4

Hello everyone , I had my believed Honda pcx 125 stolen from my drive way in the space of an hour. The insurance company 1st said they will put an excess of 1250 pounds because it wasn't kept inside my house as stated I will when not in use. I told them I was going back out and wasn't finished riding the bike so I put my chain on and the usual steering lock with anti tamper ignition on. When they realised I took out an excess protection out with the broker they changed the story and now saying I don't have a claim so excess does not come into play. It was a brand new bike straight from the insurance, I have gap policy but that comes into play when they make a settlement . I am left with nothing 1st the thieves robbed me now the insurance company. Can SOMEONE PLEASE PLEASE PLEASE HELP ME MY EMAIL aaulad@yahoo.com.
11/10/13 Audi
-5

I have recently had my scooter stolen... it was recovered the same day with damage!! does this need to reported to my insurance company?
10/01/13 Alex
-8

Our FSA licensed IFA was not covered by the companies insurance as he had previous convictions for theft and fraud.
But the FSA took a risk in relicencing him and didn't step up the checks to see if he was up to his old tricks.
We the clients suffered by the IFA clearing out all our savings.
31/01/10 Ray.
-16

Can you get cheaper house insurance if you are not at risk of flooding?
Are some of us subsidizing insurance for those who live next to a picturesque river?
21/11/09 High and dry
4

The same thing happened with my car mate. They are doing it to everybody! You are not alone and not the only person they have mugged! I'm around 600 - 700 quid out of pocket and I was covered fully comprehensive and had legal expenses recovery and couldn't get anywhere! Scam, thieves, crooks! Expose them and make them lose business. It's time to fight back, at least through exposure that they are doing these things to their so-called insured 'clients!'
02/05/09 The Goose
0

Up until now, we have had insurance with Carole Nash for about 20 years, it stared off with motorcycle insurance, and then they said they could insure our car too, so for the last 5 years they insured our 12 seat Land Rover Defender.

This year when we had a renewal quote we paid the money as normal. My wife read the small print on the main policy documents when they came through the post 10 days later - and the new policy said we only had insurance for 5 seats!

So my wife telephoned them, and they said "Ooh, sorry about that, we'll get it sorted." Next day they called and said they could no longer insure us because our car had 12 seats even though the Landy has always had 12 seats.

My wife was concerned that we wouldn't be insured, and she was told that a manager would call, but he never did. After endless calls to Carole Nash, and being put on hold for hours at a time, they said they could no longer insure us, and terminated the policy.

I work in insurance and deal with brokers. The thing that stands out for me on this is the lack of service from the broker. He is obliged to deal with the claim as he is who you pay and he earns a commission from yopur premium from the Insurer. All brokers are FSA regulated now and will carry Professional Indemnity Insurance. I suggest you make a written complaint to them in the first instance and also to the Insurer (the Managing Directorat their head office, not some dunderhead in a call centre!)
Please reply and I will be pleased to guide you through things
29/07/06 Simon
-6

Insurance companies are vultures. I had my motorbike pushed over by a car, in a motorbike shop's forecourt. It took me 18 months to get the money for the claim. At this point I had already sold the motorbike, at a loss due to the damage... Disgraceful! You pay the insurance for peace of mind, not to be insulted..
28/02/06 EvilJoker
10

Fog lights should only be used when it's foggy