I am sick and tired of the lack of respect sixth form students show members of staff at their school.  It is not uncommon for students to swear, disregard rules, not do work and generally misbehave while in sixth form.  And whenever a member of staff tries to discipline them, the students accuse them of not respecting them and treating themrs like the adults they are.

One incident occurred in an English Literature lesson; the teacher was in an emergency meeting but had written the work on the board and along with a message assuring the class that she will be back before the end of the lesson.  From then on, instead of completing the set work, 95% of the class decided to sit and talk instead.  Approximately 20 minutes before the end of the lesson, the teacher turned up and decided to question the class on the passage they should have read and annotated in the hour and a half she wasn't there.  When she received no reply to her questions she had the entire class line up with their books ready to show her how much they had done. 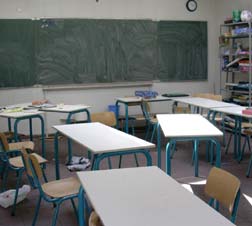 Sixth form... only 3 people had done the assigned work

Out of a class of about 20 only 3 people had done the assigned work. She spent the remainder of the lesson lecturing the class on respect and the importance of getting the work done, then she proceeded to keep the entire class in for detention, letting only the 3 students that had completed their work go.

Once the detention was over and the students returned to the common room, they then proceeded to whine and moan about how unfair their teacher was being.  I was one of the students in the class and was part of the lucky three that were let go.  And the whole time I was sitting there listening to them all moan about the teacher, I couldn't help but think that it would have never happened if they had shown her respect, the same respect that they wanted in return.

Another incident (one of many) was when a 'friend' of mine was speaking to her teacher and every other word was followed by obscenity.  I couldn't help but stare at her in shock, although relationships with teachers were slightly less formal than before, they certainly weren't so informal that one could simply curse and swear to them as though they were your drinking buddy.

When the teacher had then told her off for her language, my 'friend' reported them for inconsiderate behaviour...  I was both astonished and angry.  I can't help but wonder why these sixth form students suddenly feel as though the teachers have absolutely no authority over them and believe that they can do whatever they please.  I sincerely hope one day that this behaviour leads to the consequences they deserve and that they learn to respect those that they want respect from.

There is a six form drop out's gathering place near where I reside. Full of wasters, kerb kickers, skate boarders with no idea of what they want to do with their lives. But this is endemic in Norfolk. UK. All I see as they leave is Mcdonalds future workers.
08/11 Jetty Boy
2

Three or four people in each class? Are you in a school sixth form? Private school? Clearly, not a sixth form college in which 20+ students for AS and A2 classes are now very common. Lucky you. Or not - I cannot see how there can be much 'lively debate' etc in such small classes. I'd say around 12 to 15 people should be about right for A level classes. As for your comments about using first names for teachers, I fully agree.
15/11/11 miserablemoaninggit
-5

I'm at sixth form at the moment, I have never seen anything like the behavior described here!
We address our teachers by their first name, I prefer it as it sets a slightly freindlier tone and considering there are only about three or four people in each class, its really quite sensible. We've all been at school long enough to realise that students and teachers are not equals and just because we call them by their first names, it does not make any difference to the respect we show them.
Having said that, one teacher refuses to be called by his first name and gives anyone who calls him by his first name, a huge lecture on respect. I have NO respect for that man. I refuse to address him as Mr.
15/11/11 Seg
-2

This reminds me of the time I was sent to the assistant headteacher's office for not saying thank you.She died in January.
22/10/10 DSG
5

I think either my college was one of the good ones, or yours was one of the bad ones. Your college is completely the other side of the spectrum compared to what mine was like.

Rather than a sixth form attached to a secondary school, I went to a sixth form college and it has always been one of the most prestigious ones in our area. We had a first name relationship with our tutors but not so informal that we would swear with them. I've not seen the type of behaviour that you have descibed and alot of my friends went from our college onto universities such as oxford and cambridge.

If our teacher wasn't there, we did the work so that WE could do well and get into university. The sixth form students you talk of seem extremely immature and it doesnt sound like they will succeed in the future but I think for a lot of sixth form students, that is not the way they behave.

Maybe its just me and I went to an extremely good college, but im sure its not the norm for sixth form students to behave in that way.
22/05/10 Elisa
-4

"They watch far more television"? What is this? The 90's? We probably watch far LESS television than your generation. This is the age of the Internet.

Achieving record results? Mmmm. Yet, they no longer read. Their attention spans are much reduced. They watch far more television. Their GCSE results are largely the result of spoon-feeding by high schools desperate to improve their standing on the national league tables. Wow! Well, yes James, let's not expect them to be abe to show some real independence (something they keep bleating about wanting) and expect to get down to a task. They simply are not capable of doing so. They need 'structure'. Hey! But stick them on a Xbox 360 or PSP, and they can concentrate for hours.
01/10/09 miserablemoaninggit
1

And in other news, the Pope has been revealed as a Catholic...The example you use would pose the question "are you surprised?" To leave a bunch of hormonal teenage students for an hour and a half without any supervision is asking for trouble. It is disrespectful to expect them to sit for an hour and a half without any structure, even adults would fail to follow the instructions. I think we need to lay off the kids a bit, they're working hard and achieving record results after all. Maybe then they'll have our respect.
24/08/09 James
-3

Phil, each sixth form student is worth a certain amount of money. Sixth form colleges are funded upon the number of students who enroll and, more importantly, who complete the course. So, a student fully completing a course is worth more than a student who drops out, or is asked to leave. The answer to your question is quite simple. They are not asked to leave until their behaviour has reached an absolute 'extreme'.
19/08/09 miserablemoaninggit
-2

I'm with bk. When I was at school, if the maths teacher didn't turn up, we did the work, cause we respected him. If the unfair nob who taught history didn't turn up, we'd mess about. And if the senile fool who taught geography bothered to turn up.. well, half the time, he was convinced we weren't actually his class, so it wasn't our fault if he left again.
18/08/09 Tallulah
-8

KP wrote, "It is not uncommon for students to swear, disregard rules, not do work and generally misbehave while in sixth form". Is it common for those who do that to be asked to leave?
17/08/09 Phil
-10

Phil, that's good. Perhaps, then, we could have less of the pedantic correction of maths and grammar. Tedious, to say the least.
17/08/09 miserablemoaninggit
-4

Too many heavy school books to carry