Have you noticed that our streets and places are becoming more and more filthy?  I am unsure whether it is the lack of cleaning or is it people having a lack of respect for their surroundings.

In my town, the amount of rubbish and general waste is on the increase, it is starting to pile up in corners, etc.  It is blocking drains, which then causes flooding. The local underpass I use, one side of the path is a mix of muddy water, rubbish. There have been instances where I have spotted the odd used needle.  Glass is a major issue at the moment mainly from broken bottles.

Dog poo is another common issue that seems to be on the increase, I do see a lot of people cleaning up after their dog and disposing it properly.  The problem is that some people cannot be bothered to either pick up their dog's poo or they bag it and fling it on the grass or even hang it on trees; I have even seen people fling their poo bags at the base of a bin rather than put it in the bin, leaving a rather disgusting mess. 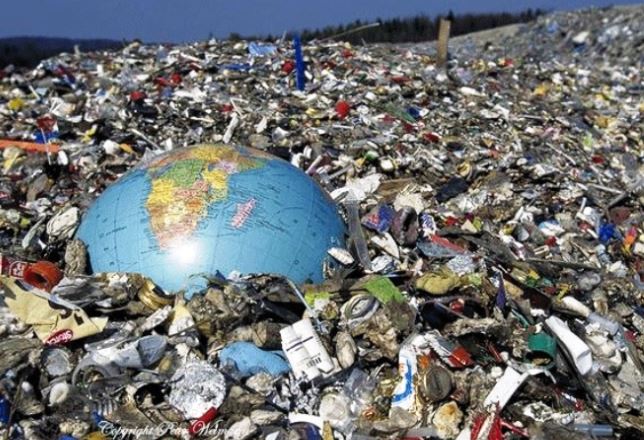 The bins at the back of the shops have not been emptied for months.  It looks disgusting to say the least and I wouldn't be surprised if the town has a rat problem.

I think the worst one was when I went to use the public toilet in a bus station.  It is one of those public loos where you pay 20p and it unlocks a sliding door.  When entering the floor was soaking wet from a leaking pipe and in the corner, someone had decided to discard their very heavily soiled underwear; the image is burned into my eyes.  I feel sick just thinking about it.  I washed my hands as best I could and got out of there.

It seems people are increasingly treating their environment as a rubbish tip.

COP26: Boris Johnson warns of 'very difficult' climate change fight but says 'whole of humanity is in the ring'

Nobody in todays society gives a toss about the future. It's all me,me,me now. Nor does the worlds politicians, they only think of their own survival and status. It's not going to change, ever, tell the kids of the future ( if there is a future) Good luck, you're on your own.
30/10 Jethro
1

Yes. I have seen the culprits of litter dropping. A number of times I have watched a parked car and the door open and the rubbish , usually Mcdonalds or fast food rubbish being placed outside the car, a quick glance and then they drive away. Everytime this has been a young male. Always of the slobbish entitled variety.
12/06 Sarah
2

The rubbish from wheelie bins is burnt, recycling dumped in the sea and grass rubbish eaten by vegans.
10/04/21 Greta
14

Where do you think the rubbish goes once the bins are emptied? It doesn't disappear off the face of the earth. Just gets added to the pile in some tip. Plastic takes approx 450 years to decompose. We have always treated the world as a rubbish tip. Shouldn't you be directing your anger towards more environmental packaging?
And on top of that higher taxes = cleaner streets. Take a look at the Netherlands and Germany for example.
10/04/21 Wake up
-10

Pick up your rubbish

My bin collectors are great and they will collect bagged rubbish next to wheelie bins. The council has actually done a good job. Wheelie bin for grass, wheelie bin for mixed recycling and wheelie bin for rubbish. It's a shame people litter and fly tip. Thankfully I live in Cheshire so there is not much litter or fly tipping.
09/04/21 Pick up your rubbish
10

Say no to dogs

Makes me laugh when people blame dog owners! I see a hell of a lot more rubbish left in parks etc from humans than dogs!
21/08/20 Laughing dog owner
-35

While you obviously have issues with your local council and rubbish collection, remember it's a local matter and each council will be good or bad.

As it happens, it's not too bad around my way, there are local street sweepers with the traditional barrows and fancy motorised machines that seem to keep the worst down.

Jobsworth bin collectors are partly to blame for refusing to empty bins due to something they see as an opportunity to be technically incorrect. Recyclable plastic is supposed to be put in a recycling bin and non-recyclable plastic goes into the normal bin, but the jobsworths refused to empty the bin because it had plastic in.

The resident was so outraged that he took all the plastic out and dumped it at the side of the road on a country lane about five miles away.

Some of the fly tipping we see could be down to jobsworth bin collectors not providing the service which residents pay for with their Council Tax (which in itself is ripoff).
16/06/20 Rubbish
6

I might look stupid but there is a reason for me wearing such inappropriate clothing in winter, and I may not be the exception either. I overheat very easily, even when it's cold, so I wear shorts and t-shirt as a counter-measure to ensure that, even after a short walk to the shops, I'm not melting with sweat. Additionally, I experience prickly heat when I wrap up and from time to time my eczema flares up too which can be extremely uncomfortable and can last anywhere between a few hours to a couple of days.

I understand that this has absolutely nothing to do with the post but I thought I might still speak my mind about this. Anyway, good day to you.

Say no to dogs

Dog poo, disgusting. Dog owners who don't clean up after their flea ridden mutts, disgusting.
06/03/20 Say no to dogs
65

I think it's a combination of things. Lack of respect, people who can't be bothered to dispose of their rubbish, everything is always someone else's responsibility, and local councils not employing people to clean up.

Children are not taught to clean up after themselves and grow up into adults who don't. They've got used to someone else doing it, and when they're out they chuck the rubbish down anywhere, and mess breeds mess in public places. If there's rubbish there already a bit more won't hurt!

Local councils charge more and more in taxes and provide less service. They actively encourage fly tipping by charging to take certain kinds of waste, and don't spend much maintaining public loos and other services. The chief executives whine about cutbacks while receiving exorbitant salaries.
05/03/20 grumpyoldwoman
3

I whole heartedly agree. I am a street cleaner and empty litter bins and pick up rubbish dropped on the floor. It seems like people don't give a toss
05/03/20 ahforfoulkessake
1

It's not fashionable to put litter in the bin anymore.
Just like umbrellas have become unfashionable & idiots walking around in T-shirts & shorts in the freezing cold during the winter months.
It's a sad state of the times.Idiots with no sense of respect & the chav society we live in today.
05/03/20 Nongshim Lampnoodle
0

You shouldn't have to pay to go to the loo