I went into the Post Office collection office today in Lewisham to retrieve a parcel that hadn't been delivered.  I was fourth in the queue: someone was already at the counter being served by the one member of staff on duty and there was a couple of young guys in front of me.  All is fine and dandy.  I was in a rush my car was parked on a yellow line - I needed to be as quick as I could.

In comes yummy mummy with her pram with tiny baby fast asleep inside of it.  She was young, fit, slim and had no heavy bags and no other kids with her.  She joined the queue after a couple of new arrivals after me, making her number 6 or 7 in the queue - I can't remember.

He made no effort at all to agree this act of generosity with anyone else, nor did he take her place as number 6 or 7 to ensure that the rest in front of her original place still kept their original place in the queue.  instead he just stood there as the new no.3 - having let in a thoroughly undeserved new No.  2 - whilst the old number 3 was now number 4 and I, as the former number 4 was now number 5. 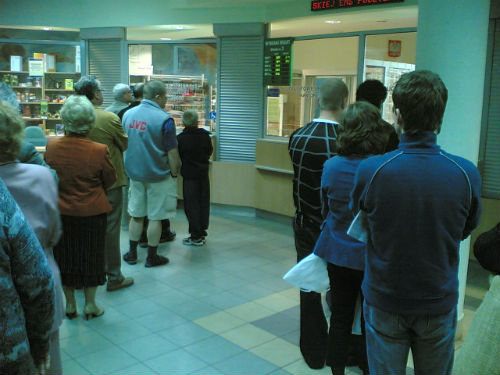 I then remonstrated with the male who had bestowed this oh, so generous offer upon the woman who eagerly took advantage of his offer and barged her way to the front, now standing by the counter, and I asked him to go to the back where she had come from herself.  The male just in front of me then turned on me and starting bullying and harassing me to try to show me up as someone who was bad mannered and inconsiderate of someone more worthy of fast service.  How untrue.  The generous man didn't apologise or do what I expected him to do, he just propped himself up at the wall and said nothing, staring into the phone, as I told him and the guy in front of me that I had no intention of losing my original place in the queue owing to his gesture.  I was in a hurry, I explained.  "Aren't we all, said the bullying man in front of me." I told him that I would go in front of him too then if he felt to strongly in favour of the woman with the pram.  He flatly refused and pushed into me.  The counter woman did nothing to sort out this row, which had now escalated to the point where I was ready to deck the little big mouth in front of me who was acting like he was running for prat of the year award.

The rule of thumb for good manners is this: do, by all means show consideration toward those who you feel more worthy of your position in a queue, but DO please confer with those who are affected by your decision and who might not agree with your gesture, and ensure that if someone does object, YOU lose your place to the person substituting your original place, not force everyone else to who may not agree with your grand gesture of generosity.  Everyone is entitled to their view and not everyone would automatically agree that a young, fit female with a sleeping baby with no bags, no hassles with other kids and no obvious strain trying to cope is deserved of special consideration to queue jump, unlike a disabled wheelchair bound or elderly person, whereby making a fuss would be considered bad form indeed and even then it is still only right to expect to give up your own place not anyone else's.

Agreed, and if you want to impress yummy mummy go right ahead, give her your place and get to the back of the queue as your place has now been vacated
10/07/16 fearandcloning
1

The more immigrants from the Balkan countries that we admit the less there will be respect concerning queueing. Balkan countries and many of the other nations in Europe simply have no understanding about the morals of queuing that we have here. Look at any bus-stop in London: there are people waiting and hanging about all over the place waiting to board the buses. The bus drivers, who are also persons who have come from other cultures, don't respect the general rules that previously operated in our nation about queueing. They let anyone board no matter how long they have queued. Push your way to front! It's the only way in this modern world. Automatically you were first in this our brave new world!

Even Portugal which used to have the most stringent moral code corcerning queing at bus stops, has now lost all concern about this.
12/11/15 No. 1
1