Over half of the UK does not believe in global warming a recent poll has suggested lately. So what does this mean?  Why are the people of the United Kingdom feeling that global warming isn't real?

Well, I am sitting on the fence at the moment, and truly analysis all the data that we can see from both camps.  Lately a thing called 'climategate' made me think even more what is going on.  I was ready to except that 'global warming' or its new religious name 'climate change' was man made, and we as people should do something about it.  Until a bunch of hacked emails from a climologist well known in his field gets found out for manipulating the data, to prove his theory.

So it begs the question, who else is doing this?  Who else is making man-made results of climate change and who else is playing us?  I watch the news, and for a whole week ITV went to Mount Everest, and showed a glacier that was melting... the trouble is, they tend to melt this time of year down there, as its just coming out of there summer, with average temperature of about 0'c.  So what are ITV doing?  Why are they pulling the wool over peoples eyes? They did the same with obese children, a band wagon of news with one liners scrolling on the bottom of the screen with 'factoiods' of information.  But when you peel away at these little facts they all come to one source.  Same with climate change information.  Government lead science programs. 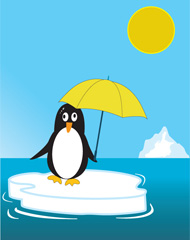 The disaster that happened in the north of England, in a town called Cockermouth.  Was a sad and terrifying disaster.  I had once witnessed a very similar disaster in my home town in west Wales in the 80s, but even then experts and government lead once back then said that it was a one in hundred year event.  It happens we have cycles in our weather that people cant explain.

So global warming, is another cycle in our weather that we can't explain.  Facts are this, sea temperatures are going down, average temperature has dropped, and glaciers are not melting but getting bigger.  There is a climate change, but not the type of end of world apocalypse that we are all leaded to believe. People rattle on about we need to do something, but it's all a paradox.  If we do something what's to say we don't cause the problems!?

Its like when people go on about nature reserves and how we must look after a certain species of animal.  But the problem is looking after one animal has detrimental effects on the surrounding animals, like reintroducing Beavers to the UK, its actually causing problems and not solving them.  Human interference isn't always a good thing.

So tell me people?  Are you a global warming denier?  What do you feel we should do about it?  We are experiencing a change of climate, but it's nothing to do with temperature, its all to do with money in my humble opinion.

Everyone, especially stupid politicians, is jumping on the "Global Warming" bandwagon because of the current weather and floods, ............."we told you so"

If this type of event happens nearly EVERY YEAR I will join them.

However, so far it is a random event.

We know putting pollutants into the atmosphere heats it up, since the 19th century we have been putting millions of tonnes of the stuff into the atmosphere, it's quite logical to say that this warms things up the massive climate change takes a while;the scales we're looking at are often too small to notice.
The name global warming isn't technically correct, some places will get colder, some warmer, some drier, some wetter. This is an international problem and ignoring it won't make it go away.
Developing solutions might;big, cheap and different-that's the almost impossible thing we need.
19/10/13 S.B
1

global warming is all a spoof. people profit from it and mainstream media perpetrates the myth of climate change. climate change?? woo, the climate is changing! woo woo. we must do siomething right? wrong. there has always been climate change and always will. same as there will always be those getting on the bandwagon and making a buck out of the latest nonsense fad. the carbon tax thingy is another scam to get more money out of the people. are any of the people revolting? some are, they really oughta wash! everyone esle oughta wash themselves of the global warming scam.
18/05/13 scandinavian axeman
0

Judging by the ferocious winters wev`e had over the last few years, I seriously doubt that the earth is getting warmer, quite the reverse. It seems to me that another ice age is just around the corner!
20/10/12 hairyfairy
-3

Al Bore, oops, Al Gore has become a multi millionaire from the sale of his Global Warming books and videos bought by the Global Warming Alarmists. He also made a mint from his investments made in the Carbon Tax credits system. When will you Global Warming Fanatics start to use your last remaining brain cell. I do rant a little, but it's just that I am a tad fed up with all this Global Warming Scamming. The biggest threat to our planet is overpopulation.
I guess we need to have a global nuclear war to thin the population down a bit....buckets full of sunshine, that's what we need to solve the problem.
04/08/11 Scholar
2

I understand that My-pet-borg-is-dead likens us to a virus due to our ability to raze entire ecosystems in the blink of an eye. However, unlike viruses, we can choose whether to destroy or to preserve our own environment. It's an advantage that, far from likening us to viruses, differentiates us from all other forms of life on Earth. If we may be the planet's greatest enemy, then we may be its saviour as well, for the same reason.
07/06/11 DSG
-5

Ah, another climate change worshipper shows up trying to prove me wrong. Have you ever stopped to consider that CO2 is one of the main building blocks of life? Without it, life on Earth could not exist. Or the fact that CO2 levels were much higher in the Cretaceous period than in the present? Frankly, I will not bow down and accept this climate change propaganda without a fight.
06/06/11 DSG
2

"d) past natural climate changes have a different primary cause from what is being seen now."

How do you know? Why can current climate change not be happening for the same reasons it happened before?

Incidentally I have seen much of the science "proving" AGW debunked too.
05/06/11 grumpyoldwoman
-3

grumpy,
'...we can both quote scientific articles which support our views'

Well you haven't cited anything. There was the claim about 'Mt. Pinatubob in the Phillipines' and Bellamy, both easily debunked false claims, pseudo-scientific definitely, but scientific? Not remotely. At least what I've cited is linked to the science.

At least you could try getting your facts right.
05/06/11 Factchecker
2

DSG
Try to get your facts right. So far your claims are wrong.

The Discovery of Global Warming - A history of the science from the American Institute of Physics.
http://tinyurl.com/yzcn8vv

Or pick any world-class scientific organisation, for example the Royal Society.
http://royalsociety.org/search.aspx?query=climate%20change
05/06/11 FactChecker
0

Well, Factchecker, we can both quote scientific articles which support our views; what it comes down to in the end is which scientists you believe. Personally I always liked David Bellamy.

How does your hero Moonbat explain the fact that it was warm enough in this country in Roman and medieval times to grow grapes for wine in many areas where it is too cold nowadays?
05/06/11 grumpyoldwoman
0

Disposable coffee cups and the environment