We've all been affected by the Covid 19 pandemic in one way or another, but some of us just get on with it and make the most of a bad situation without complaining.  But not students apparently.

Fair enough, they probably shouldn't have gone back to University in such numbers and those that can do their coursework remotely probably should have been given the opportunity to do so.  However, the fact remains that they shouldn't have been mingling and having parties when they got there.  But you can't tell someone from that age group not to do something can you?  I am sure there are students who did follow the guidelines, but there are a lot who wouldn't have.

No I haven't forgotten what it is like to be young, but this is a serious situation and before anyone starts moaning "Oh it's just the flu, don't be so dramatic" - it's not me making the decisions to lock down the country.  The simple fact is the sooner this goes away the sooner we get back to normal and that can only happen when it's not spreading.  This can be achieved either by a vaccine or by keeping distant and wearing masks etc. 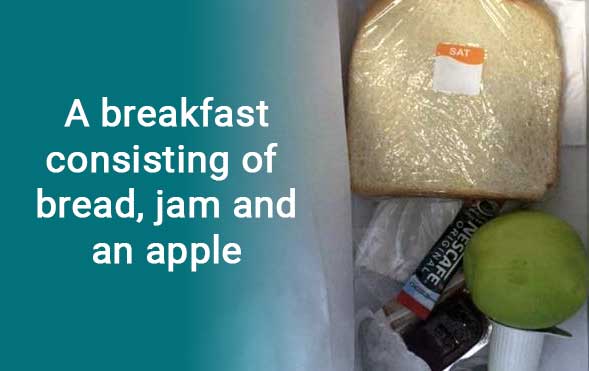 On to the subject in hand moaning about the food when forced to self isolate and comparing the halls to an "expensive prison".

Yes, some of it might well be poor quality, but consider the fact that you are in a situation of your own making and there are many people in the world a lot worse off than you.  Take the people in India, Mexico, Brazil and even some parts of the United States.  Bread, jam and an apple for breakfast isn't really to bad and let's face it, the average diet of a student probably consists of this kind of stuff or worse anyway.

I am overwhelmed by your post with such a nice topic. Usually I visit your blogs and get updated through the information you include . Thank you for sharing
Concrete Contractors Maitland
26/05 john
0

Take out the fact that all they want to do is party but the process enough of moving in would be enough to spread the virus. Kitchen Exhaust Cleaning
25/11 James
0

How many of you UK plonkers are living on credit? How many of you can't sleep because of financial worries. Still trying to maitain this facard of self importance? COVID and all the many variants that are to come are here to correct balance and destroy self importance dreams.
16/05/21 Jethro
0

Not a grumpy old whinging woman

The metric system was introduced 40 to 50 years ago; all the now over 70s would have been young enough then to start using it! "New metric system"?

One of the big problems in my area is the older generation (70+) all stood together chatting in the supermarket. Leaning on each others trolleys, saying it's a terrible time while hugging each other. I overheard one say, "I measure in feet and inches, not this new metric system, so until someone tells me what two metres is in feet and inches I'll do what i want." So it's not just students whinging.
18/10/20 University educated
5

Students don’t know the meaning of hardship, think of the people around the world who are starving and have no idea where the next meal will be coming from, think of what the young would have had to go through during the Second World War? The problem is students will more than likely attend a university that is not in their area and will have travelled say for instance from London up to Dundee and can you imagine if anyone of them had Covid 19? Take out the fact that all they want to do is party but the process enough of moving in would be enough to spread the virus. I’m fed up of students moaning, seeing posters on the windows please help or please us Beer it’s pathetic, what these snowflakes need to get is get some perspective, think what it would be like to be suffering with Covid. A close friend of mine has had the virus back in April and he is still not right, he struggles to walk far and still struggles for breath. Think of this it won’t be forever and they have plenty of time to party after we have conquered this awful virus.
13/10/20 LancashireLass
1

I see no reason why they had to be locked down in the first place. Unless they have serious underlying health conditions they aren't going to be ill, and if they all get it now they won't be passing it on to elderly relatives at Christmas.

"The simple fact is the sooner this goes away the sooner we get back to normal and that can only happen when it's not spreading. This can be achieved either by a vaccine or by keeping distant and wearing masks etc."

It would go away if we had a vaccine, but if we just keep it at bay by wearing masks etc. it won't go away. It's just delaying the inevitable. Without a vaccine the only way Covid 19 will "go away" is if we achieve herd immunity. This means most of us have to catch it, not avoid it!

Also of course there are a lot of subjects which cannot be taught remotely; science courses involving experiments, drama and art. I'm sure there are others. How are they supposed to manage?
13/10/20 grumpyoldwoman
-3

I'm not a student, but there are a lot of lazy assumptions in this gripe.

1) All students are out boozing and partying, sadly the photos in the Daily Mail show "young people" out in towns, no actual proof they are students?

2) Student's didn't choose to return to universities, they were asked to return and encouraged by the Government and the college authorities.

3) Bread and jam might be fine fare for you, but why should students not be given a healthy option? Again, a lazy stereotype.
13/10/20 Jacob Right-Smug
4