Our Fiat car (worth approximately £2000) broke down recently and we took it to a small garage in Wolesley Road, Plymouth.  The owner of the garage and two of his mechanics took a look at the car.  They explained briefly what the problem was and then informed us that it would cost more to repair than the car was worth.  They then suggested that the most economical thing to do would be to scrap the vehicle.  Thinking that they were trustworthy professionals we agreed to this and they offered to scrap the car for us free of charge.

So the paperwork was signed and the car was on the way to the scrap yard - or so we thought until about eight weeks later when a man arrived on our doorstep asking if we had a spare key for our old Fiat as he had lost his! 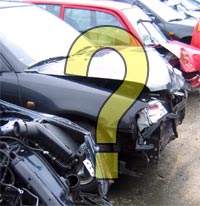 We couldn't believe it when we discovered that the garage had actually advertised the car for £1400 and sold it for £1250.  Now is it just me or have we been ripped off big time and taken for a ride by this garage?  Does anyone know where we might stand legally as consumers on this issue?

Surely they are there to provide us with accurate honest information as per Trading Standards and not to rip off honest hard working people?  Have they not actually acquired a car from us by deception?

May I suggest that to avoid this happening to others you only go to an approved garage and not some back street hustler?  I am sure there are some honest independent garages out there trying to make an honest living, but unfortunately they seem to be in the minority.  Their counterparts are more interested in conning people and making a quick buck rather than offering good old fashioned honest reliable service.

I have read this blog. This is a very impressive and attractive blog for scrapping my car. You can understand things before scrapping. You can scrap my car near me in the UK.
15/06 BN Car Scrap
0

Not only small gagages mate, even like you said approved ones do it. Arnold Clark gave me scrap value on mine, then sold it to an aution site who are currently selling it.! Disgusted
31/12/15 Vin
1

Hi there anyone had this car broke down garage towed me and said car beyond reasonable repair from start to finish the mechanic dealt with me. I was advised there was a car that's just gone through its mot. I was also told they would scrap my car give my road tax back and money from scrap value minus tow fee that I never got. Anyway I took this garage to court car I bought was not fit for purpose submitted all paper work statements of people been ripped off by this garage video evidence where the owner threatened me with in the 14 day period before the hearing. In court the garage claim the mechanic sold me this car and in court the owner said all his staff could buy and sell cars for their own gain on his property and were insured to do so. The mechanic produced not with in the 14 day period of the hearing a print out not the original not a copy of the original but a print out signed and dated the date of sale not from previous owner but a good friend next door to this garage and that is very suspicious considering I have noticed the wrong registration details on this print out. Should this garage have some sort of sign advising that his staff can buy and sell cars as I said I dealt with this mechanic from start to finish how was I to know it was a private sale. Forgot to say also have video evidence of previous owners son saying his dad sold or part exchange this car to a garage in the same location as this garage. I also contacted the previous owner by letter that came back not this address. Court ruled in favor of the garage and the mechanic sold me this car. They also charged me for the tow and parts and labour why would anyone let alone a mechanic buy the part and then fit it and scrap the car with new parts. I have submitted this evidence to the court of appeal because I was not allowed to submit some of my evidence where do I stand. Also been in touch with a couple of insurance companies who informed me there in no such insurance there is lots of insurance for staff but none that lets staff but none that allow staff to make gains from there employers by buying and selling. Anyone any ideas’ where I stand with an appeal regarding these issues.
MICK
17/09/13 mick
5

if your car is not in repair condition mean to say that that is fully junked. then i would like to suggest you to replace that junk cars for new brand car and plan for new car.condition apply or free.
visit :http://tamaki.ca
13/04/13 Sammy
-4

I put a deposit down on a car. The garage said they had no relevant history to its mechanical state but only that it had a full years mot. The next day I checked it's mot history on the gov website & realised they put it through & failed on a many important things. I contacted the garage & asked him to disclose all relevant paper work & warranties on any new parts. He lied straight away saying they didn't know anything about it & it wasn't the mot station they use. When I said I had proof he back tracked & then said I wasn't entitled to any information or warranties on new parts....you only need the mot certificate & basically we've got your deposit so piss off! Under my consumer rights & sales of goods act I'm sure they have misled me & withheld important information regarding the cars mechanical. Surely every garage inspects a car & keeps relevant paperwork????
21/04/12 Rozzzee
-9

Many small garages have the odd banger at the back of the workshop, they are there to work on when they have no other work to do.
You can not have people standing round collecting pay for nothing, or should they all be sacked ?
20/03/12 Propshaft
-1

I am not taking sides here Pauline but I would like to make a point. I have resurrected a few bangers in my time as a hobby. There is no such thing as a scrap car. They are scrapped because a repair is not considered commercially viable. Why spend hundreds of pounds repairing a car that is only worth tens of pounds? the other aspect is the ringer market. There is every chance your garage has worked very hard, at cost to resurrect your car. They will have to learn to complete the paperwork in the future.
02/02/12 Boblet
-2

a follow up to last comment re the fiesta is that the dealer filled in the relevant forms for dvla and I signed where I had to.. he said he would send it off and gave me a form to claim my 2 months tax refund. i filled it in and posted it same day 23 dec '11 and yesterday 31 jan '12 got a letter asking me what i've done with car and refusing a refund, so i had to go and see the dealer who told me he waits till he gets a few before sending them off! he swore that the car was never up for sale, but I know it had been!. he said he sent form off last monday! he was nasty. I asked for name of garage to sent to dvla, he gave me a card which i've sent them! King's Lynn norfolk . I have taken advice but put it down to experience and tell anyone I can not to go there! ( by the way, thanks Russell for offer of help anyway)
01/02/12 pauline
1

My ford fiesta failed MOT and needing welding and other jobs the labour was more than the jobs total bill of £440.....I couldn't afford to spend that much on it and showed the mot failure papers to motor dealer near me. He said he couldn't do it cheaper and said he'd take the car away for £50 i agreed. He said a young apprentice was going to practise welding on it. Guess what? it is for sale in his garage now.....I feel a fool and too embarrassed to go and ask him how much? I must be gullible.
23/01/12 Pauline
-4

Hi I am a lawyer. You have indeed been defrauded on the facts as written, though that may not be the complete story of course.

When you fill out the seller section of the V5 you should have ticked the box to say you were selling as scrap. Assuming you did this, the garage is not allowed to sell it on.
14/12/10 Nat
-16

..Okay so the car may be too expensive for the customer to fix independently or uneconomical for them.. whatever!.. then offer them 'something' and tell the truth.. or tell them "look if you get a better quote, then take it.. but If you don't and you want to get rid of the car.. I'd like to pay you something for it and spend time and money to fix this up!"
...Only then the garage would deserve the extra money for their time.. none of this Arthur Daley B.S! ....greedy git!! lol!... on the upside!.. good judgment comes from experience I guess.
27/06/10 Truth Hurts
-2

Garage bill too much with excessive labour charges

Car problems caused by bad service from a garage