Here we are again.  A Royal funeral and Joe and Josephine Public are on the TV news pouring their hearts out in the most personal way possible about what the Queen Mother meant to them.  It happened in 1997 with the death of Princess Diana and it happened again this week.  What is it about the death of a Royal that makes people think they have a personal relationship with the members of this most aristocratic of families?

The Royals are the subjects of intensive media scrutiny and we see their faces day in, day out.  However, does the fact that their appearance in the media is commonplace make them less distant to us commoners?  I think not.  Was the Queen Mum really a lovely lady?  The fact is we do not know.  In April 1999, Princess Margaret scalded her foot getting into a bath, and several commentators referred to the shameful fact that a 68 year old woman had no idea how to prepare her own bath water, never having done it before.  The life experiences of the ruling elite of this country are as different to the rest of us as if they lived on the moon.

So why the emotional outpourings?

My gripe on this occasion, however, is not with the Royals.  It is with the people Ive seen on the TV news this week.  Men and women from Macclesfield and Torbay who stand in front of the mass media and speak of their personal loss.  What is wrong with them?  Through their tears, do they really believe that the Royals care one iota about the lives of the ordinary people of this country.  Would the passing of one of us trouble any of them? Of course it would not. 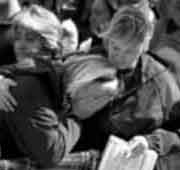 So why the emotional outpourings?  And why on public television?  Why do these people feel they can appear in my living room and speak in the most personal manner about an individual they had no connection with?  The Queen Mum / Princess Diana / Whoever was a wonderful person who was so radiant and, the worst of all the platitudes, had the common touch.  We have no idea what these figures are like as people.  Professionals choreograph the media events in which they take part; every word that comes out of their mouths is scripted.  They have a duty to make public appearances in the same way as pop stars and actors do; we have no way of knowing whether or not they want to or not.  Whether or not we should have a Monarchy is a debate that will continue, however if we are going to keep them lets at least see them for what they are.  I have nothing personal against the woman who died last week, but I didn't know her so I can't say anything good about her either.  She was Elizabeth Windsors mother, not mine or yours

"Newspapers" like the Daily Mail are obsesses with celebrities and the royal family, especially the younger ones, have just become hereditary celebrities. The minute focus of the tabloids on Kate Middleton's clothes and weight prove that.
25/09/11 Insomniac
-1

I for one am sick and tired of the sycophantic vomit-inducing outpouring of fake hysteria and emotion every time a member of the parasitic Royal Family breeds, dies, or is married. Who really, in their heart, gives a monkey's toss about these people? It is so fake.

I am looking for somewhere to hide on 29th April as unfortunately I have no choice but to be in the UK on that day. I am hoping that, rather like during the idiotic football thing that took place last year in South Africa, some places advertised 'Football Free Zone', I will be able to find a pub or restaurant that proudly says : "No Widescreen TV, no Royal Bloody Wedding."
14/04/11 MikeP
9

Simon the Piper I am a common man of Britain, I recognise no other class. I was invited in a round about way to join the Buffs. This guy asked me, do you believe in your queen & country? I answered I will die willingly for my country but the queen can sod of. I admire your grit & sense of humour
14/04/11 Boblet
-12

Simon the Piper, you and some of the other commoners on this thread are, by your attitudes, a disgrace to the United Kingdom. This is what is wrong with the world today - there is no respect for tradition - just a bunch of unruly, uneducated loose cannons who consider disrespecting their betters a means to think themselves important.
14/04/11 Traditional Values
-5

You're just about to sit down to a meal on one of the best days of your life and everyone is extrememly happy.

Some twerp you just paid 3k - 10k for a wedding reception suddenly sucks that out of the room.

Simon The Piper, you rock! I love your style. Get out there and play those pipes to the world boy, your talent is wasted in Hereford.
04/09/08 Burnsy
-6

To simon the piper just read your comment I nearly peeded my pants laughin wish I'd been there brill!
07/11/07 margo
-13

Ah well, another parasite off the books eh? I was playing my bagpipes at a wedding on the afternoon she died. I'd just piped in approximately 150 people including the newlyweds into the reception. Everyone had just sat down when the manager of the hotel came in, cleared his throat and everybody fell silent as he raised his hands. "I regret to announce blah blah Her Royal Highness The Queen Mother blah blah died at such-as-such time this afternoon blah blah". Everybody remained silent apart from a few "oh dears" from some of the older guests. Then for some reason the manager turned and looked at me, to which I exclaimed in a loud voice, "Don't look at me, I didn't kill her!" A brief second, and then the room burst into uproarious laughter. Needless to say, I managed to make a graceful but sharp exit.
23/05/07 Simon The Piper
-12

There is a song written by Eltion John for Queen Ma's funeral, much like candle in the wind for Diana, he has written 'Goodbye yellow teeth row' for HRH.
15/03/06 michael caine
6

Someone who fends for themself

Dear Ferocious Scotsman. . .I think you are great, yes, you are right, the ethnic minos are breading like ahem . . . and I don't like it, at least you would think it was ok while they are living in their own country, but here. . . they can breed and draw BENEFITS! HAHAHA. . . disgusting or WHAT?! never mind, we can't do anything about it, so should keep our mouth's shut for fear of reprisals. . .
09/10/05 Someone who fends for themself
-9