Are all mothers in law complete pains in the backside?  I'm sure all of them aren't bad but mine is and she's driving me mad!  For example, if there's a crumb on my floor or a cup in the sink I'm a scruffy cow.  If I don't get the washing out of the washer the second it's done I'm a lazy cow.  She tells lies (which she has admitted to) to cause arguments.  She rarely has our kids to stay over, but always has their 7 other grandchildren at drop of a hat and it's not because our kids are naughty because they aren't, it's because the others are always there and there's no room for ours (her own words).  The other grandchildren have parents too...

Although she rarely has our kids, when she does she favours our little boy over our 2 girls and it's so damn obvious. I causes conflict between our kids and my partner and I have to pick up the pieces.  She then says she will have the girls so they don't feel "left out".

My partner and I got invited out for a meal last year with our friend, so we asked if she would babysit.  She said no, but then went on to say that she would ask my father in law to come to our house and watch the kids, but we would have to pay him!!  Why should we pay him when my partner's brother and sister have never been asked for a penny and their kids are always at her house?  We didn't end up going for the meal.  My father in law knew nothing about that until recently and he wasn't very happy when I told him.  He's totally different to her and he said he would never charge us for watching his own grandchildren! 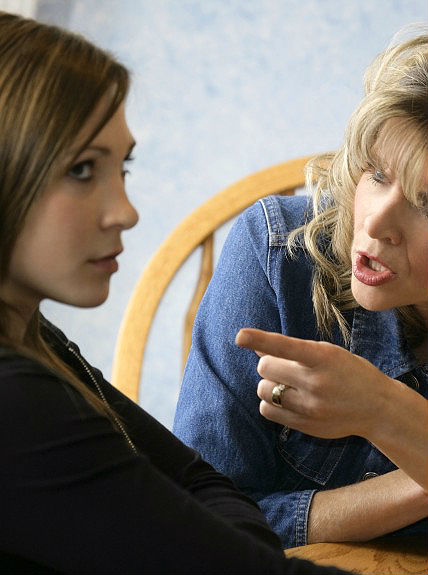 One minute she's up my backside and asking me to drop everything to go help her with stuff and then the next she's up someone else's bad mouthing me to all and sundry.  I know she talks about me because she talks about EVERYONE, so there's no doubt in my mind.  She moans about my house being "cluttered" with toys as she puts it.  I've got 3 kids for crying out loud and they wouldn't have as much "clutter" if you would stop bringing everyone else's cast off "clutter" to our house! I told them "no more old toys thanks", but they still keep bringing them round.

I've got to a point where, after 10 years, I've started speaking up but when I do it either falls on deaf ears or lands me in the s**t!  What do I do? Speak up or put up and shut up?  She didn't talk to my partner for over a year the last time he spoke his mind and she took it out on the kids, didn't even come see them Christmas morning like she usually does.  If I speak up she will do it again but kids aren't exactly missing out because she doesn't bother with them much these days as it is and quite frankly I'm sick of trying so damn hard with her.  It makes me wonder why I even shed tears over it in the past because it wasn't worth it.

Beware of online spell or to fix your broken marriage or relationship problem or after a divorce or Breakup,I was recently scam by two of them, until one faithful day i meet a man called Dr Oseiboh who help me to get back to the mother of my 2 kids after we have been separated for 3 years,I only pay for the items required for the spell and he cast the spell for me within 48hours my ex wife called me and beg me to forgive her for everything and we are back together.if you need a real and quick love spell or you are passing through pregnancy problem Dr Oseiboh is the answer, Please if any body needs. LOVE SPELL,LOTTERY,PREGNANCY SPELL, DIVORCE SPELL,STOP COURT CASE AND WIN ANY COURT PROBLEM,DEATH SPELL,BUSINESS SPELL AND MANY MORE YOU MAY NEED. Email him now for your own help. via email droseiboh12@gmail. com website https://droseiboh12.wixsite. com/spell add him on whatsapp line or call +2347017565415.
11/04/19 Joe
0

I have been in bondage ever since my husband leave for another woman, It was really hell for me and everybody told me to forget about him but i could not because i love him so much, Things get worse until my friend Rose introduced me to this great spell caster Prophet osaz and i contacted him through his email spirituallove@hotmail.com,i explain everything to him and he cast a spell for me immediately after three days, everything turn around and Ahmed come to me on his knee begging for forgiveness that i am the one and only woman in his life now. i was surprise i have never seen such a miracle in my life. I am so thankful to this man and i will forever publish his name "spirituallove@hotmail. com"
25/08/14 Lamini
0

I agree some aren't worth the effort and they're usually the ones who when you answer the phone to them they will go off, make up lies and discuss you to the others. If you can't get to the phone they will go off and say you're deliberately not answering. If you go to a celebration they will be rude at the party or go off and do it behind your back... and if you get anything new you have to keep quiet about it or they will go off and compete. A no win situation!
24/02/14 No Win Situation
0

My ex MIL hated me for being shorter than her daughter but just used to be happy around her as this annoyed her far more,guess i'm tryin to say that some people just ain't worth the effort
19/08/13 Rob
-5

Frankly, she sounds like she has a narcissistic personality disorder to me, which can be highly destructive and tear families apart. If it were my kids she was doing that to, I would refuse to have anything to do with her at all. She has no business using your children as an emotional crutch to curb her jealousy toward you - by dividing and ruling and creating a golden child for the boy -v- scapegoat scenario with the girls, and your kids should not be exposed to such treatment either. So I would issue her with a firm ultimatum: either she 'plays nicely' and keeps your kids out of her agenda issues or she doesn't see the kids at all from now on and you will cut her out of their lives completely for their own sake.
18/08/13 Grumpy xx
-6

I wouldn't bother much with your MIL she obviously has jealousy issues with you. She doesn't see you as a friend she sees you as one of her competitors. As for saying her husband needs to be paid, well she is obviously a manipulator if he denies this and she just wants you think that her husband thinks like her.

I see these sceneries more in female in-laws and put it down to jealousy. In my husband's family it is always the women who fall out and always the main instigators. They want to be top dog so to speak. Forget the alpha male, they want to be the alpha female!

Your MIL wants to be in charge and if she can't get her own way she is awkward. Let your children be around loving people, not people who cause problems. It doesn't matter if she's their granny, if she can't be kind then spend less time with her. Your husband needs to support you.

It sounds like she likes picking fault, nothing is ever good enough. You usually find these types have a lot of faults of their own but don't have the vision to see what they're like. I know a fault finder and I just take her with a pinch of salt. These kind have double standards.
25/07/13 Know What It's Like
-1

If my wife is out of the house and my mother-in-law telephones us and I answer the phone and explain my wife/her daughter is out (at whereever) she just hangs up! No, "goodbye", "I'll phone back later", "how are you" - just a simple put down of the phone!

I've never done anything to upset her - actually I've done loads for her, helped her move house, decorated her house, loads of stuff.

I think we just have to accept that we don't choose our mother-in-laws and there's always going to be some sort of tension.
25/07/13 You
2

that husband of yours should grow a pair and tell them what's wrong if he's aware of the situation you're having.
May sound a bit better coming from him
20/07/13 ahforfoulkessake
3

I mean seriously, no mother in this world thinks her daughter-in-law is good enough for his son! Just get on with it.
17/07/13 Thunder
-11

Get the father-in-law on side, sit her down, tell her to shut up, outline your grievances and insist on answers. Sounds like you've nothing to lose.
17/07/13 Lord B
0

It sounds to me as though your best bet is to forget trying to mend the relationship. You don't say whether the other grandchildren are her daughter's or her son's, but I have seen a number of mothers-in-law who think that no woman is good enough for HER son and allow that prejudice to affect the relationship.
17/07/13 Charmbrights
-3

Late motherhood, but at what cost?

Problems and stress living with the mother in-law

No child support from wealthy family

How do you deal with a difficult stepdaughter?