Using your neighbour's broadband or using someone's unsecured Wi-Fi network to connect to the Internet.  This is something that has been in the news quite a bit recently and there have even been a few cases where individuals were arrested for “borrowing” someone else's Wi-Fi connection.

In my opinion however, logging on to someone's Wi-Fi network is NOT theft and how can it be seen as theft when the individual concerned in most cases doesn't even know and doesn't experience any actual loss?  They didn't miss that tiny bit of bandwidth and if they did, why on earth did they elect to SHARE their Internet connection with the entire street?

Many people have tried to argue that it's simply a case of taking something that doesn't belong to you and to me that is absolute nonsense!  If you're neighbour is in his bedroom listening to music with the window open and you are in the garden enjoying that same music, does that make you a thief? I think not.  At the very least using someone's Wi-Fi network may be considered a grey area because you are not stealing tangible property and are not actually trespassing in order to take something.  I just thought I would throw that one in there for those who would argue that it's the same as going into someone's living room and watching their TV! 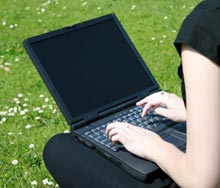 I don't advocate abusing someone's network by downloading gigabytes of music and films, or even worse something more sinister.  But quickly checking one's email on the move, what's the harm in that?  In fact recently I had to borrow a Wi-Fi connection a few months back for a few days when I moved house.  You know how long it can take some ISP's to provide you with broadband, well this freely available connection enabled me to keep my business flowing smoothly and I'm pretty sure I wasn't a burden to the network concerned.

Good news on the horizon it seems.  I recently came across something called BT Fon, which basically allows BT Total broadband customers to share part of their home connection in exchange for free access to this new wireless network community.  Those of us who are a little more security conscious needn't worry as the public portion of the network is completely separate from the owner's broadband connection.  It's a fantastic idea I think and one that I hope takes off and is picked up by other providers.

It's not theft but it's still possibly illegal. It could be an offence under the Computer Misuse Act 1990 or/and the Communications Act 2003. In 2005 a person was found guilty under the latter act and fined £500 for "wardriving" (going around with a laptop looking for free wifi connections).

Just because there isn't a password set, doesn't mean you're allowed to use the network.
20/01/16 cantab
1

It is stealing.. but anyone with a touch of common sense would password protect their connection, right? It doesn't mean they deserve to be stolen from as punishment for their stupidity.. but to be so trusting when humans are essentially vultures when it comes to getting free things might mean a sharp wake up call would be good for them..?
24/03/14 pet
1

Keith : Your analogies are pathetic. Read my original response to you. If you don't understand, go and find out a little about how WiFi works. There might be a site such as 'Networking for Dummies'. Try it.
14/01/14 Friday lunchtime
-2

Andy : Your analogies are pathetic. Read my original response to you. If you don't understand, go and find out a little about how WiFi works. There might be a site such as 'Networking for Dummies'. Try it.
13/01/14 Friday Lunchtime.
-7

It's not about free or paid. If you don't want other people to inadvertently use your unencrypted Wi-Fi then you should confine it within your own territory. Outside of your own house/apartment unencrypted Wi-Fi is as free as air. If you think you can charge your neighbour for using your free-to-air Wi-Fi they can also charge you for contaminating their living space with your Wi-Fi signal which in the long run may be harmful to human health due to radiation. Btw when your neighbours turn on their lights you also see light; when they turn on their heating you also feel a bit warmer. Do you want to be charged for those things as well?
13/01/14 Andy
0

That's an inane comment Andy. Somebody else pays for that WiFi connection and using it without their permission detriments their use of it in several ways. It's because of people like you that everyone needs to be aware of the need to secure their WiFi connections.
13/01/14 Friday Lunchtime
-2

Well I'm breathing in air that doesn't belong to me without anyone's permission. Is that theft also?
13/01/14 Andy
0

What happened to the traditional method of borrowing? Would a knock on your neighbors door to ask their permission be so hard?! This is especially so in the authors case, his business may have been in trouble without his neighbors unwitting assistance. Asking if fine, and requires a thank you at the end. Just taking without asking and without someone's knowledge, just doesn't sit well with me, stealing or not.
12/01/14 Rach
-2

Of course it's stealing dumb noobs
if I'm paying for it and it your taking it from me with out my concent then you are a thief retards. And you should be bummed in prison for your crime.
12/10/13 starakita
1

Noblet, it's a fact. It's the law. It's relevant and you're wrong.

Section 13 is an offence which covers this category. I know this because I spent 15 years teaching it to police officers.
Today we have more specific laws as well. It does not mean that the existing law cannot be used as well/instead of. Offenders usually break more than one at a time and the CPS picks the one they thick they're more likely to get a result with.
It's very very clear. Causing electricity to be wasted or diverted is an offence. If you steal WI-FI then you are causing the electricity that runs it to be diverted to a third party. That's theft, plain and simple. No myth there at all, just plain fact!
09/09/13 Freddie
0

Fair do's FUP. But in this green & pleasant land, being charged with doing something is not being convicted of doing it. It is the British way.
09/09/13 boblet
-2

Getting online with WiFi at the local pub