In 1999 I brought a bog standard VW Golf with a 1.4 engine.  I had been driving a Toyota Starlet for several years before with very little trouble with repairs. But after a promotion at work I could afford a nice new car.  Whilst searching for this dream car, my ex partner whom I lived with at the time, advised me to buy a VW.  As my auntie was moving to France and I planned to drive over often for mini breaks to visit her, I would need a reliable strong car to do this.

a minor fault with the electrics

I finally found my lovely VW Golf and counted down the days until I could collect it.  My best friend had also brought a Golf a few months before and she swore by it.  Best car she had ever driven she boasted!

After owning my car for 4 years there seemed to be problems with the ABS light.  I took it into a VW dealer who fixed the problem saying it was a minor fault with the electrics.  All cars get minor faults, right?

Well after 6 months its started again so I took it back and again VW said minor fault.  It was all fixed and I just put it down to one of those things.  My ex promised me that he has always bought VW and it was nothing to worry about.  I must add that this is the man who kept an old Jetta on my drive that he was constantly repairing.  He also owned a Golf that was just a year older than mine, again as his car got over 3 years old he was constantly repairing it.  He was also in the local VW fan club!!! 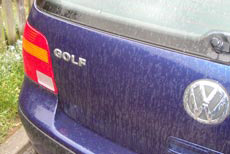 The next thing to go on my car was the oil light.  This time to try and save money I thought I would ask my ex (the VW expert) to fix it as the last 2 repairs has cost me a fortune.  He changed the oil but this didn't stop the light always being on.  So I had to grit my teeth and go back to the main dealer.  Again it was a minor fault and it was repaired at my cost.  A few months later the engine light was flashing and the car was vibrating when I was sitting in traffic.  This time my ex changed the spark plugs and it made no difference.  To his horror I took the car to a private garage where they said it was a fault with the electrics and would cost me silly amounts to put right.  I complained to VW that this was missed and they agreed that as they always service and repair my car, they would try to fix it at a cheaper price.

Six months later I was visiting my friend (who also owned a Golf but used it as a part exchange on a Vauxhall due to the cost to repair her electrics!).  The drive home was through a country lane.  It was late at night and the car decided it would start vibrating again.  The oil light came on and then the engine light.  I pulled over phoned my ex to come and look at it then follow me home.  When he got there and tried to start the damn thing there was no life in it at all; it plain refused to start!  The next day I got another local garage to take a look.  No way was I listening to VW again.  The mechanic was very honest and explained there is a design flaw in VW's above an R reg.  He could fix it but advised me there was no point, I would be back in 6 months for the same repairs again, a year if I was lucky.  My ex insisted this was a good deal.  "Its a VW and they are strong like a bull" he said.  More like weak as a kitten I thought.

I decided to investigate these issues myself and found that many other VW Golf owners had similar, if not the same problem and they were advising against buying the newer model Golf.  My ex of course wouldn't accept this and said that they were probably other car dealers trying to flog their own cars.  By this time he had spent twice the amount I had on his Golf, but wouldn't admit that there was a problem with them.  In the end I sold parts from my car to try to raise the money I had lost in repair charges.

I had to be without a car for some time but I am now the proud owner of a Ford Fiesta which I brought second hand as I'm still paying the loan for my 15k Golf.  My fiesta was new in 1997 and drives me to France and back as well as to work on a daily basis.  On its last MOT it sailed straight through.  I also passed my ex (the VW fan) the other day whilst he was driving his new Vauxhall Astra!  Seems some of us take longer to learn!

My wife had a new golf mk8 in may 2021, it's had lots of glitches with the adaptive cruise control, collision avoidance, sat Nov, central display blank, no heater control, etc, it went into a VW dealer for software updates, this was 3 days, following the update the same problems and more, this went on for 2 weeks and then the car would not start at all, it was recovered to the dealer for a battery fault, this is over 3 weeks, no loan car given even though we request one on we are now hiring a car at our cost, just had a call to say they have fitted another part, but this hasn't fixed the issue, I have never had a VW before, we have had Peugeot, Renault, nissan, mitsubishi, vauxhall, even way back montego, never have we had problems that the dealer could not sort, I have spoken to the VW uk, useless, the dealer head office waiting for a response, so at this point looks like i need purchase an old car for my us to use as paying for a mk8 2020 golf and a hire car to go about our lives
30/11 Chill
1

Typical of modern VW cars. Littered with electrical faults. Some that could prove dangerous. Also, lots of other recalls on their cars. VW are not the company they once were.
20/07/20 Rickie
1

If you think VW cars are bad try driving a Peugeot. Ever wonder why there are so many on the roads of the UK? They are cheap piles of crap that break down on a regular basis. Don't believe me, BUY ONE.
21/05/19 Me Can IK.
1

I have WV Golf Cabriolet. It is only just over a year old. I am presently waiting at home once again for Road Side Assistance to come out and then wait again for it to be relayed to WV garage and wait for a replacement car. This could take all day.

I am thoroughly sick of this car - having brought it new with now only 8,000 miles on the clock. The service received from VW has been appalling - being told that a new car can have a flat battery - not what is draining this battery.

I have a complete donkey of a car and this is an insult to donkeys and a donkey of VW service repair. I would never advise anyone to buy a new VW Goft Cabriolet. I will be selling mine - unfortunate for the poor purchaser.
16/09/13 Christine Nuttall
1

when oh when will people take the comments on this site seriously .......
VW will just take your cash and do not give a toss after that take it from me a very loyal VW customer never ever trust VW or its dealers
17/07/13 des
-5

My VW mk6 golf has been out of warranty for 4 months, I had a light come on in the dash to do with exhaust emissions, I had a friend scan the problem. He saw that the fault was the exhaust pressure sensor that was actually working although there was another fault with the electric water pump showing too, this was making the car idle at higher revs. I took it to vw and told them what the problem was, they scanned it and replaced the pressure sensor which I had to pay half of. 2 weeks later the same light and problem occurred, back to vw to find it is the water pump as I told them. Now I am expected to fork out £150 to fix the actual problem, surely this can't be right and I shouldn't have to pay for their incorrect diagnostic, has anyone else had the same problem and what was the outcome ?
05/07/13 GQ
0

The car though is bullet proof. So long as you give it TLC and repair the faults (parts fail it happens to all cars not just VW - wear and tear happens) and you give it a good service it works well and has never let me down. However I do all of my own servicing for the vehicle; car garages are a license to print money - buy a decent service manual, study it and repair faults before they become major issues.

If you've got a VW; join a site like Volkszone they are helpful people and they will help if you ask the question correctly (alot of them may have repaired the same fault and will possibly be able to diagnose the fault for you and advise how to rectify it).

"Unlucky" luck has nothing to do with it .The myth is that VW made great cars, they never did & never have, certainly no better than any other manufacturer have you read the comments
28/04/11 Boblet
-6

27th April 2011 Will not visit Verve VW garage in Wishaw again, after spent £ 420 to replace a motor which powers the passenger side's E windows , door mirror and door locks and just after 4 days the same problem appears and at that time I have discovered that the rubber seal, on the front passenger side door ,was not fix ,all the coloured wires were exposed. Once taken back to Verve to complain ,was told to replace the seal will cost me a further £185. If I knew the cost will exceed £500 , I would gone to other garages. VW made great cars why can their garage be the same.
28/04/11 unlucky
-9

Fed up with my unreliable VW Golf

Loss of power on my VW Golf when overtaking