No, I’m not talking about any particular issue with the media! My moan is about the overuse of the word "issue" in the media, in politics and by corporate high fliers.  Everything these days, instead of being a problem, or a difficulty or even a discussion, is now an ISSUE!

Media issues, they keep using that "I" word!

I assume that this has crossed the Atlantic at some stage, just like "I hear what you're saying" or "Say again".  These phrases seem to have gone out of fashion and I for one, wish people would think about what they are saying, rather than blindly going with the flow and spouting out nonsense phrases.

Is it just me that perceives this, or has anyone noticed the overuse of the word "ISSUE" in the media? 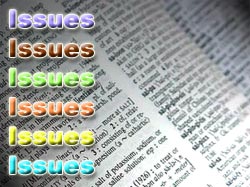 I would like to bet that any interviews recorded more than a couple of years ago would be less likely to contain “issues”.  These days however “issues” are all over the place and you can pretty much guarantee the word will be used several times in a single interview broadcast.

I sent a text to Five Live the other day to congratulate John Hutton, the Minister for Work and Pensions, who somehow managed to do a 10-minute interview, without using the word once! Funnily enough my comments were not read out on the air.  Presumably this was because the presenter had “issues” and used the word regularly himself!

Totally agree . I have serious “ issues “ with that word and I the overuse of it. It’s” politicospeak”. If I am allowed a neologism?
23/06 Fastdoc
0

I hate the word issue. At least half of our communications in the workplace contain it. It's the white bread of vocabulary. I challenge myself to find ways of never using that word.
17/11/17 Nancy
4

I notice that when Microsoft offer a software update they write " this update is to solve an issue with". I think they should state " we have issued this update to solve a potential problem with" etc.
07/09/16 Thig
0

I have noticed the "issue" word is increasingly being used in the workplace. However, when somebody voices their "issue" an " issue" is found against them. Soon things get so that everybody has some kind of "issue".
19/09/13 sideWALK
1

How pathetic is this, from the Daily Fail :

'We have now completed our internal investigation with our long term sales associate, who was involved in the EDL issue, and he will be back at work in due course.'

An issue is either :

A child, as in : "John Smith, issue of Bill Smith and Mary Jones"
or
an instance of a publication, as in : "The September 25th. issue of the New Scientist."

Three cheers for this observationI The overuse of the word "issue" is something that's irritated me ever since it emerged on this side of the Atlantic. Indeed, instead of "problem", "difficulty", "complaint", "enquiry" and so on, everything in the world of business, government and so many organisations of all colours these days, is an "issue". In particular when it comes to contacting a company to make a complaint there is a subtle psychology at work here when instead of admitting incompetence, shortcomings, inefficiency etc., it's all referred to as being "an issue": the reason for this is that the use of the word "issue" in this context is an attempt to neutralise any potential admission of guilt or wrong doing; e.g. I contacted my internet service provider once to complain about the slowness of their rectifying a fault and was told "we have looked into your account and have not found any issues there". Give me strength! The overuse of "issue" however is only but one example of ghastly corporate-speak which is all part of Amercan degrading of the English language.
18/09/13 Simon
2

What gets me going is all the hand flapping and arm waving by tv presenters , do we really need these affected gestures to emphasise every word some of the experts on antique road show , among others are awful ,it's very distracting
12/08/13 nell
-2

Get back to work

Micheal, it's nit picking twots like you that really pee people off. If you what to make a spectacle of yourself go and play with the traffic on a motorway. I suppose you are another public sector worker with nothing better to do.
16/07/13 Get back to work
-1

Why is it that those involved in the media, be it in newspapers, on TV or on radio
choose to use the term 'ahead of' when the perfectly good preposition 'before'
will do ? I've just managed to write this comment ahead of my lunch !!!!!
16/07/13 Michael
-4

Shakespeare is overrated tosh in my opinion