Don't even get me started on stupid sayings.  They are annoying, pointless and completely illogical.  Take for instance "I wouldn't touch him with a ten foot bargepole."  Where do you acquire said bargepole?  Morrisons?  Does anyone actually do this?  Even Peter Kay said 'who has a bargepole?' Just imagine one day, walking along the street when you see somebody you don't like.  You whip out your bargepole and think 'no, I can't nudge them with this because I hate them too much'.  The way I see it, if you really hated someone, it would be a good thing to give them a whack with your bargepole, it would annoy them, embarrass them and completely confuse them.

I remember one time, I was at a guidance meeting to help me make some important decisions about my life, at which point the teacher said "I'll tell you this for free".  I just looked at her blankly.  What, do I put my money away now?  Turning to face her, I realised that she was completely serious.  Do you usually get out your money and expect people to give you advice if you pay them?  I certainly don't.  Surely one as clever as you wouldn't do that; quite frankly, it's insane.

"A penny saved is a penny earned." Where the heck does that come from?  When I save money, I don't expect that because I've saved it, it means I've earned it.  I can guarantee that 100% of people who've saved money haven't then found that they have more money than before.  You don't think that when you save money, it automatically increases in value, do you?  What if we said that to people in a poor country?  We tell them that if they save money, they've earned it.  I can imagine their eyes tearing up and letting out a little whimper because the world doesn't work like that; if only they could earn money simply by saving it!

"Everything happens for a reason." I think this needs to be kept in context.  For instance, yes, everything happens for a reason but it doesn't mean it's a good one.  He didn't remember his homework because he was distracted this morning.  That's the reason.  Does this mean that you can say this and make everything better?  I think not.  It's also one of the most obvious statements ever.  I recently decided to investigate this further and found that there is indeed a rather strong correlation between cause and effect.  I think it's possibly called one of the main principles of life but of course that's just a theory. 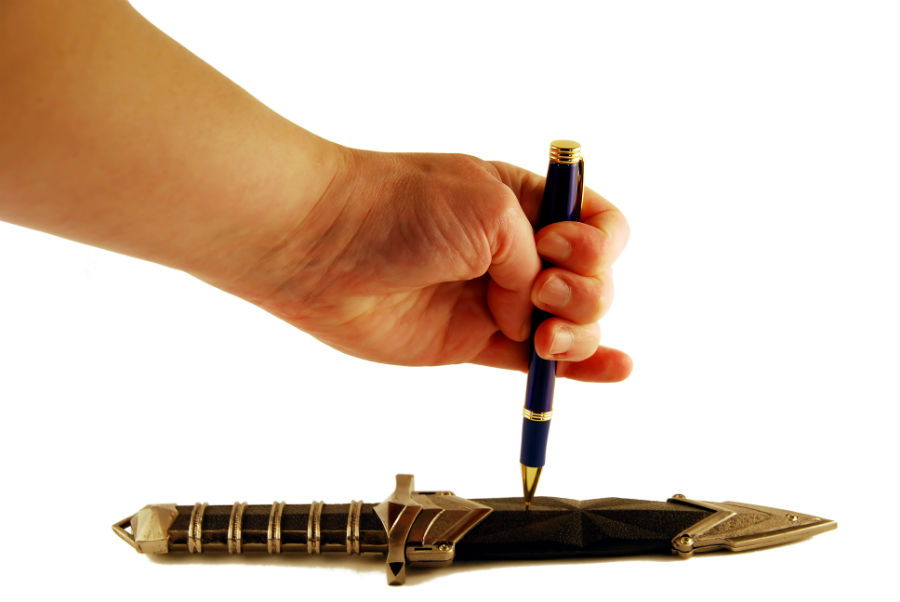 Also, who thinks the pen is mightier than the sword?  I see the point but I'd really, really like to test this theory in a little duel.  Are you up for it?

Please, please tell me that you are intelligent enough to realise that good things don't necessarily come to those who wait!  If that's true, I guess I'll just lie here in bed doing nothing until my guardian angel knocks on the door and gives me a million quid and preferably a boyfriend.  Sure, seems legit.  That would be literally the best thing ever but it is also the most futile mission ever.  If anyone truly believes that, they must be completely crazy.  Then again, it would also explain the high levels of unemployment but that's a different story.

My parents said to me the other day "it's the same difference".  The way I see it, if you think that's true, you seriously need to buy a dictionary.  The word 'same' means that the two things are not different.  The word 'difference' means that the things are not the same as each other.  You must be able to realise that they are completely opposite and it would be foolish to put them together, surely?  In the end, it forms a sentence that makes no sense whatsoever.

In conclusion, I think we should put a ban on all stupid sayings until 'hell freezes over' (which, by the way, is another ludicrous phrase - we don't even know if hell exists and for all we know, this global warming could end up having a rather strong effect on the temperature of hell).  They are the things that probably peeve me the most in the world.  Perhaps it would make the language easier for foreigners to understand and, let's face it, make it much easier for us to understand one another.

Everything happens for a reason? daft saying because in a random world, thing happen for no reason whatsoever.
26/01/14 hairyfairy
-1

The TVs aren't expensive; it's the Sky subscriptions that add up!

Also, the latest phones, ipads & so on.

When people say 'People on the dole have more money than me', I know they read the sun, express or mail and believe every word rather than treat it as sensationalism, also of course people on low incomes have flat screen TVs, they're not expensive and it's virtually impossible to find any other type of TV.
25/01/14 Tired and emotional
-1

Do you ever have to attend meetings where someone straight out of university (not uni, why do people say that?) with a 2:1 in business studies and who would have owed about £25,000 (not 25k, why do people say that?) if he wasn't on a funded degree which jettisoned him into an invented non job stands there with an overhead projector and speaks entirely in 'buzz words' to people who were grafting while he was still swimming about in his dad's sack? I find these people amusing, 'Going forward', 'Ball park figure' and 'we need to step up to the plate guys' types, what they say is bad enough but why do they insist on pausing for 'effect', throwing a pencil in the air and repeatedly catching it (but not always) and clapping their hands with sleeves rolled up to expose 9" forearms before saying 'Any questions guys'? (there never are).
25/01/14 Tired and emotional
1

What about all those 'violent' saying on the X Factor?
You smashed it.
You killed it.
You nailed it.

"I can see where you're coming from."

Mine are:
We need to step it up a gear.
We need to think outside the box.
Its added to the bottom line.
"To be fair"
"Absolutely" - then the have to add further comments to their answer which is usually- Absolutely, I mean blar blar.

I agree with tinsel, I think this is a great gripe. I doesn't see why people are being so negative, this gripe made me laugh.
04/11/13 Someone
-1

Couldn't agree more, especially as the saying is "if you take care of the pennies the pounds will look after themselves!" That makes much more sense and has considerable basis in fact. Take your weekly shopping bill for example. Remove every branded item from your trolley and replace with the stores own brand equivalent. You'll only save peenis on each item but overall it will add up to a few pounds.
So, not a silly saying when you quote it correctly!
01/11/13 Samson (Delilah's too busy to post)
-1

(1) "Everything happens for a reason". No it doesn't. Life is largely luck and chance and is mostly random and we have very little control over it. (2) "If you take care of the pounds, the pennies will take care of themselves." Silly, meaningless nonsense. (3) "blah, blah, blah....they say." Who does? Who are 'they? Tell me, pleeze? (4) "I'd like to go back to the good old days." What good days? If they were so good, why do people devote most of their lives to improving things? (5) "I like to walk down memory lane." Personally I'd prefer Memory Avenue, or Memory Road.
31/10/13 Grumpy xx
1

I have a couple neighbours both have been bankrupt in the past. I think that is what they mean by "You make your own luck". Go bankrupt, buy the stock off the liquidator for buttons. "Make your own luck". I think not. I will bet there is more than one bankrupt piece of crap reading this post. "If the cap fits wear it" Neighbour.
29/10/13 boblet
2

Ah GOW, if you had a time machine it might be tempting to get rid of him, but as a sci fi fan you will know that altering the space-time continuum could have dire consequences!
28/10/13 Petra
4

Samson, I should have mentioned that one being a big fan of the Doctor! Shame it isn't real, but you made me laugh anyway.
28/10/13 grumpyoldwoman
2

Overuse of the word 'issue' in the media

The schmozzle over English language